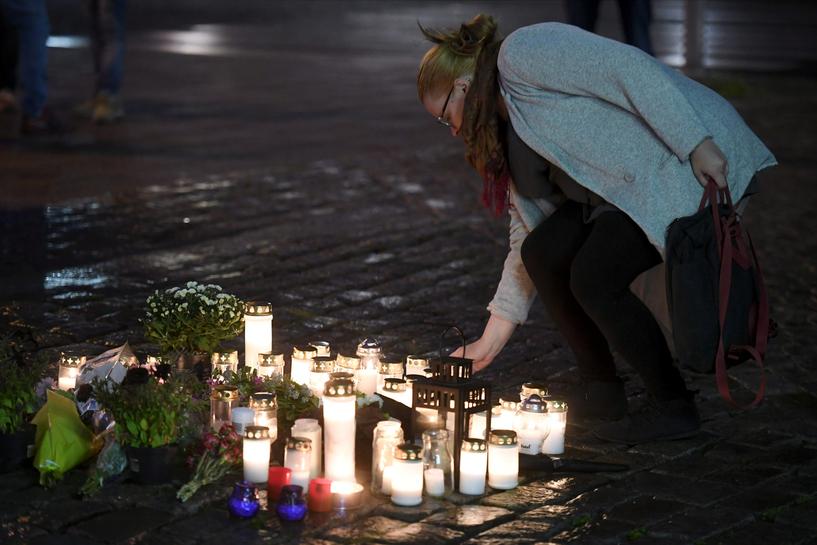 HELSINKI/TURKU, Finland (Reuters) – Finnish police are investigating Friday’s knife attacks that killed two and wounded eight in the city of Turku as terrorism-related crimes, they said on Saturday.

The suspect arrested on Friday was an 18-year-old Moroccan, police said, adding that the two people killed were Finns and an Italian and two Swedish citizens were among the injured.

The attacks shocked the Nordic country where violent crime is relatively rare and which has been named as the world’s safest place to visit by the World Economic Forum.

Following the attacks on Friday, police shot the suspected attacker in the leg and arrested him.

“Due to information received during the night, the Turku stabbings are now being investigated as murders with terrorist intent,” the National Bureau of Investigation said in a statement.

Security was reinforced nationwide with increased patrols and more surveillance in case more people were involved.

“First thing we heard was a young woman, screaming like crazy. I thought it’s just kids having fun … but then people started to move around and I saw a man with a knife in his hand, stabbing a woman,” said Laura Laine, who was sitting in a cafe during one of the attacks.

“Then a person ran towards us shouting ‘he has a knife’, and everybody from the terrace ran inside. Next, a woman came in to the cafe. She was crying hysterically, down on her knees, saying someone’s neck has been slashed open.”

Candles at Turku Market Square for the victims of Friday’s stabbings are pictured in Turku, Finland August 18, 2017. LEHTIKUVA/Vesa Moilanen via REUTERS

The police arrested a number of people during the night as part of their investigation.

Local media said the police raided an apartment in the eastern Turku suburb of Varissuo, which is home to a large immigrant population and located about 7 kilometers from the market square where the attack took place.

The arrested suspect had been in Finland for only a short time before the attack, Helsingin Sanomat newspaper reported. The police will hold a news conference at 1100 GMT.

Four of the wounded were still in hospital, three of them in intensive care, while the other injured persons would be sent home on Saturday, the hospital said.

Flags were at half mast on Saturday across the Nordic country whose Security Intelligence Service (SIS) raised the terrorism threat level in June to ‘elevated’ from ‘low’, saying it had become aware of terrorism-related plans in Finland.

Leaders of Turku’s Iraqi and Syrian community condemned the attacks and said they would hold a rally of solidarity in the city’s main square. An anti-immigration group was planning a demonstration in Helsinki.

The SIS has said anti-immigration groups have been on the rise in the country after it received about 32,500 asylum seekers during the migration crisis in 2015.

“Terrorists want to pit people against each other. We will not let this happen. Finnish society will not be defeated by fear or hatred,” Interior Minister Paula Risikko said on Twitter.

On Thursday, a suspected Islamist militant drove a van into crowds in Barcelona, Spain, killing 13 people and wounding scores of others.