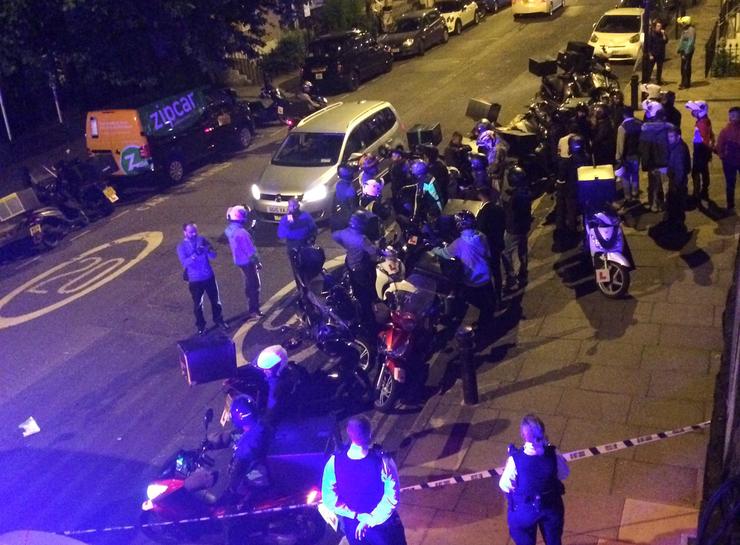 Two assailants on a moped pulled up alongside a 32-year-old man in the Hackney area of east London at 2125 GMT on Thursday and threw acid in his face before one of the pair made off with the victim’s moped.

In the next hour and a half, three other men across Hackney and one in the neighbouring borough of Islington had corrosive substances hurled at them, police said.

After one of the robberies in Hackney, a man was left with facial injuries described by police as life-changing.

Police said they had arrested a 15-year-old boy in Stoke Newington, northeast London, and a 16-year-old male at a separate address in north London on suspicion of grievous bodily harm.

Food delivery companies Deliveroo and UberEATS said two of their couriers had been attacked.

“We can confirm that one of the victims of these attacks had been taking food to a Deliveroo customer,” a spokesman said.

“We are in touch with the rider and will be providing him with support.”

UberEATS said it was shocked by the attack. “We have been in touch with the courier and offered to help him and his family in any way we can,” said Toussaint Wattinne, General Manager of UberEATS in London.

The company thanked all the couriers who rushed to help in the immediate aftermath of the attack.

Food delivery riders, on both cycles and mopeds, have become a common sight in London and other cities in recent years.

Metropolitan Police Commissioner Cressida Dick said the number of acid attacks appeared to have risen in the capital, though they remained relatively rare.

“I don’t want people to think that this is happening all over London all of the time – it’s really not, but we are concerned because the numbers appear to be going up,” Dick told the LBC radio station in an interview.

“Acid attacks are completely barbaric,” Dick said. “The acid can cause horrendous injuries. The ones last night involved a series of robberies we believe are linked.”

The government said it was working with the police to see what more could be done to stop the use of acid for attacks.

“It’s already an offence to carry acid or a corrosive substance to cause harm,” Prime Minister Theresa May’s spokeswoman said. “We are working with the police to see what more we could do.”