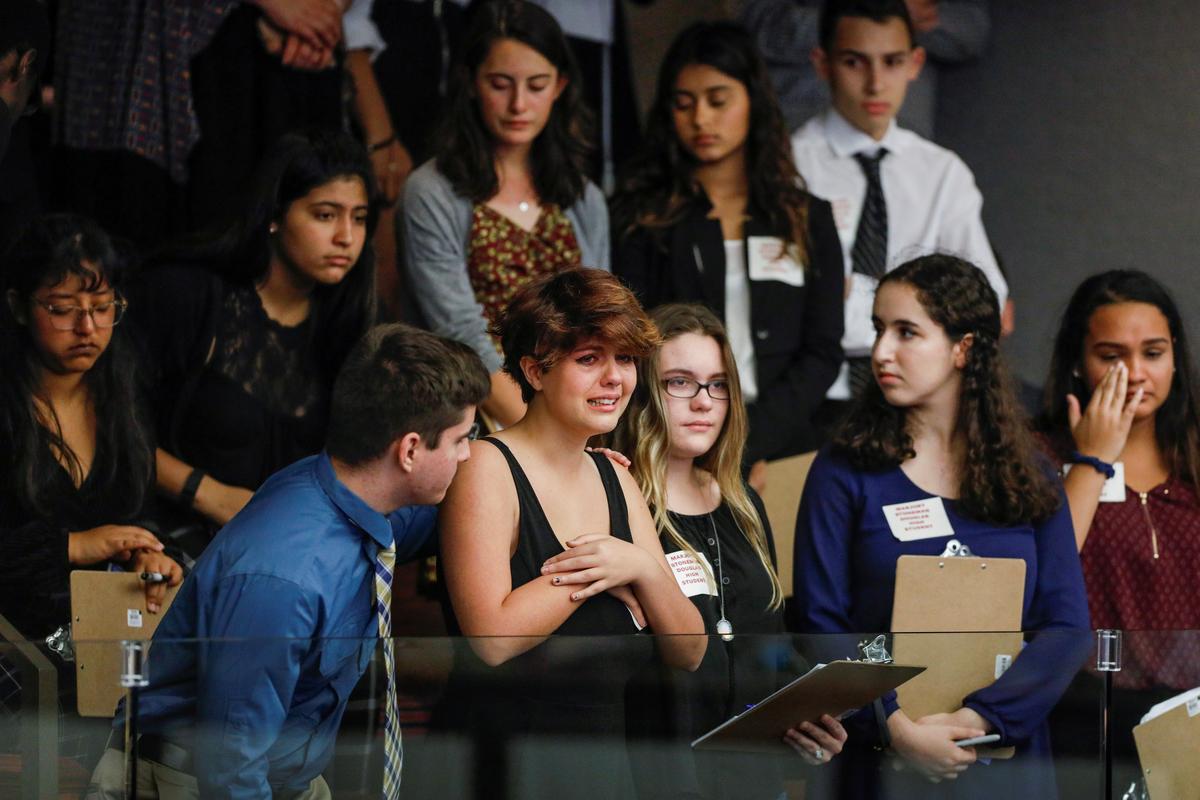 TALLAHASSEE, Fla./WASHINGTON (Reuters) – Dozens of teenaged survivors of the second-deadliest public school shooting in U.S. history marched on Florida’s capital on Wednesday to ask lawmakers to ban sales of assault rifles of the sort used to kill 17 students and educators last week.

Dressed in jeans and T-shirts and carrying signs with the slogan “#Neveragain,” survivors of the Feb. 14 mass shooting met with lawmakers in Tallahassee, to ask for stricter controls on gun sales.

Investigators said the assault was carried out by 19-year-old former student Nikolas Cruz, who purchased an AR-15 nearly a year ago. Police have charged Cruz, who had been kicked out of Douglas for disciplinary problems, with 17 counts of premeditated murder.

“We want to see some common sense gun laws so this will never happen again,” said Rachel Padnis, a 16-year-old sophomore from the school near Fort Lauderdale.

President Donald Trump, a strong supporter of gun rights, was due to meet later Wednesday with parents, students and teachers who have been victims of gun violence, including those affected by the Valentine’s Day shooting in Florida.

The White House meeting comes a day after Trump said his administration would take steps to ban bump stocks, an accessory that enables a rifle to shoot hundreds of rounds a minute. A spokeswoman said the administration was open to the idea of setting national age limits on sales of assault rifles.

The state Senate on Wednesday postponed discussion on a proposed gun control bill, with Senate President Joe Negron, a Republican, saying the chamber will take up other measures. The legislative session wraps up on March 9, leaving lawmakers little time to act.

Before that move, dozens of students packed into a meeting room and peppered Negron with questions about why civilians should have continued access to assault rifles.

Negron declined to say whether he would support any specific gun control measures, saying, “That’s an issue we’re going to look at as we work to develop legislation.”

Students from Marjory Stoneman Douglas High School and those supporting them react as they watch the Florida House of Representatives vote down a procedural move to take a bill banning assault weapons out of committee and bring it to the floor for a vote in Tallahassee, Florida, following last week’s mass shooting on their campus. REUTERS/Colin Hackley

Trump, a strong supporter of gun rights, was scheduled to host a “listening session” with high school students and teachers at the White House on Wednesday.

Trump’s support for any tightening of gun laws would mark a change for a Republican who was endorsed by the National Rifle Association gun lobby during the 2016 presidential campaign.

The NRA opposes an outright ban on bump stocks but has said it would be open to restrictions on the devices.

Under pressure after Parkland, the deadliest-ever shooting at a U.S. high school, Trump on Tuesday directed the Justice Department to quickly complete a proposed rule that would treat “bump stocks” as machine guns, which could effectively outlaw them in the United States.

Senate Democratic Leader Chuck Schumer on Wednesday urged Trump to back legislation, instead of a regulation, on bump stocks, noting that the Bureau of Alcohol, Tobacco, Firearms and Explosives has questioned whether it has the authority to ban bump stocks.

“The only way to close this loophole permanently is legislation,” Schumer said.

Later this week, Trump will meet with local and state officials, and plans to talk with governors about the issue.

Calls for national student walkouts and marches in the coming months have gained steam on social media, including the “March for Our Lives” on March 24 in Washington, spearheaded by Douglas students.

Hundreds of students walked out of their high school in Davie, Florida, about 16 miles (26 km)south of Parkland, in a move to show support for the student activists, local TV images showed.

The NRA has agreed to participate in a televised town hall on guns to be broadcast by CNN later Wednesday, the news network said. NRA officials did not immediately respond to requests for comment.

Gun violence on public school and college campuses has become so commonplace in the United States in the last several years that administrators regularly stage drills to train students and staff in the event of a mass shooting.

China Increases Charges Against Publisher Who Spoke Out For Dissident
Pakistan gives UN a dossier on India after India submits one on Pakistan
Transgender Pakistanis find solace in a church of their own
South Korea reports more than 500 new COVID-19 cases, highest since March
Commentary: Goodbye, Robinsons. You may soon be with familiar company