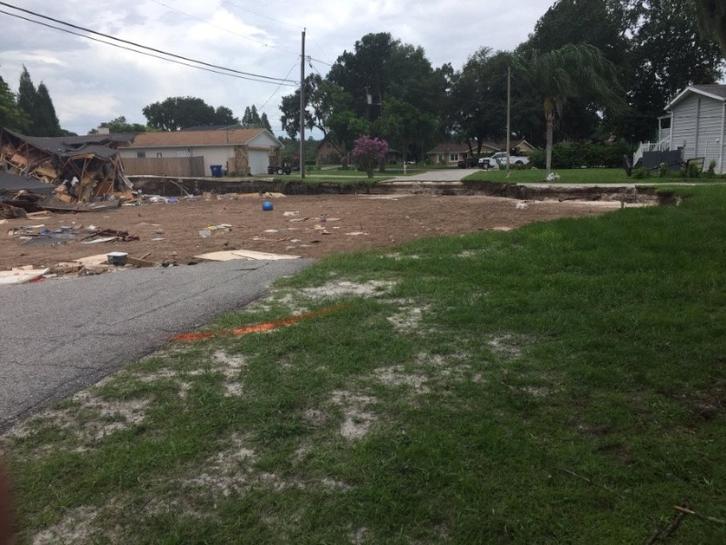 (Reuters) – A sinkhole near a lake north of Tampa that swallowed two homes Friday morning appeared to have stabilized by the early evening, but may expand again, especially if it rains, authorities said.

No one was injured in the two homes that were destroyed or the other nine that were evacuated even as the sinkhole expanded to 225 feet (69 meters) wide, said Kevin Guthrie, assistant Pasco County administrator for public safety.

Two dogs were rescued from the first of the two homes that fell victim to the sinkhole, the Pasco County Sheriff’s Department said.

When it was first reported to authorities on Friday morning, the sinkhole was a small depression under a boat in the lakeside neighborhood in Land O’ Lakes, about 20 miles (32 km) north of Tampa and about 25 miles east of the Gulf of Mexico.

It had already sucked in the boat by the time firefighters arrived 15 minutes later,

By late Friday morning, the sinkhole was 200 feet wide (61 meters) and 50 feet (15 meters) deep. By mid-afternoon, it reached 225 feet and appeared to stabilize, Guthrie said at an early evening press conference in the neighborhood.

An expanding sinkhole destroys homes and is threatening others, north of Tampa in Pasco County, Florida, U.S. July 14, 2017. Pasco Sheriff’s Office/Handout via REUTERS

He said that while the hole appears to have stopped growing, authorities will remain vigilant in case it begins to expand again. He said residents who had to leave their homes will not be able to return for at least a week.

Pasco County Sheriff Chris Nocco addressed residents who have stayed and live near the sinkhole. He said he knows they are anxious.

An expanding sinkhole destroys homes and is threatening others, north of Tampa in Pasco County, Florida, U.S. July 14, 2017. Pasco Sheriff’s Office/Handout via REUTERS

“We know it’s going to be very hard for you to sleep because anything, any bump in the night, you’re going to wonder what’s going on with your house,” Nocco said.

He then assured residents that deputies would be alert overnight and “will be there in a moment’s notice” if they have to be awakened to remain safe.

In 2013, about 25 miles away in Seffner, Florida, a man was killed when a sinkhole opened under his bedroom while he was sleeping.

Geologists at the University of Florida have defined a sinkhole as typically being a natural depression or hole in the Earth’s surface caused when rock, often limestone in Florida, is dissolved over time.

Guthrie said both homes destroyed on Friday had been damaged by separate sinkholes in the past decade, and repaired.