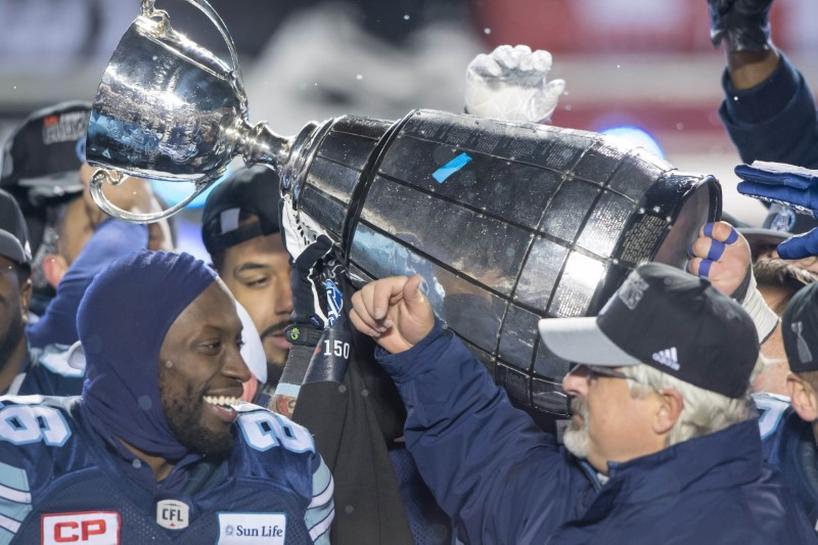 (Reuters) – The Toronto Argonauts used a record catch and fumble return to claim an electric 27-24 win over Calgary in the 105th Grey Cup on Sunday in Ottawa as the Stampeders suffered more Canadian Football League championship game heartbreak.

Toronto used explosive plays to heat up a wintry night in the Canadian capital turning a Grey Cup record 100 yard touchdown catch by DeVier Posey, a championship record 109 yard fumble return for another touchdown from Cassius Vaughn and an interception in the endzone by Matt Black to snuff out a last gasp Calgary scoring bid to bring the CFL season to breathless conclusion.

”It’s unbelievable right now, there is so much fight in our team, I had good feeling all week,“ said Argonauts Ricky Ray, the only starting quarterback to lead his team to four Grey Cup titles. ”We just got it done.

“That big catch (by Posey) got us going and a couple of other big catches along the way and at half-time we just said we have to go out there and execute.”

Much of Canada’s Super Bowl was played in a raging blizzard creating all kinds of problems for players battling for footing on the slippery turf but provided the perfect backdrop for the halftime show with country music star Shania Twain brought on stage in dogsled.

While the Argonauts celebrated, the heavily favoured Stampeders were left crushed as the Grey Cup was pulled from their grasp in the final seconds for the second straight season.

Making their fourth appearance in six years in the Grey Cup game the Stampeders have been the league’s dominant team but unable to translate that success into titles winning just once.

”It’s heartbreaking,“ said Stampeders coach Dave Dickenson. ”You can’t find any silver lining to this game we kind of gave one away.

“Honestly there are more important things than sports although it doesn’t feel like it right now.”

Leading 24-16 with under five minutes to play the Stampeders had appeared headed for redemption when they moved deep into Toronto territory and poised to extend their advantage only to watch Vaughn scoop up a loose ball and run it back for the score to tie the contest.

Lirim Hajrullahu would boot a 32 yard field goal with 53 seconds on the clock to give Toronto their first lead of the day but the suspense was not over.

The Stampeders would work the ball down to the Argonaut 24 yard line and well within field goal range to tie the game only to have quarterback Bo Levi Mitchell go for the win and be intercepted by Black in the endzone.

Reporting by Steve Keating in Toronto. Editing by Amlan Chakraborty