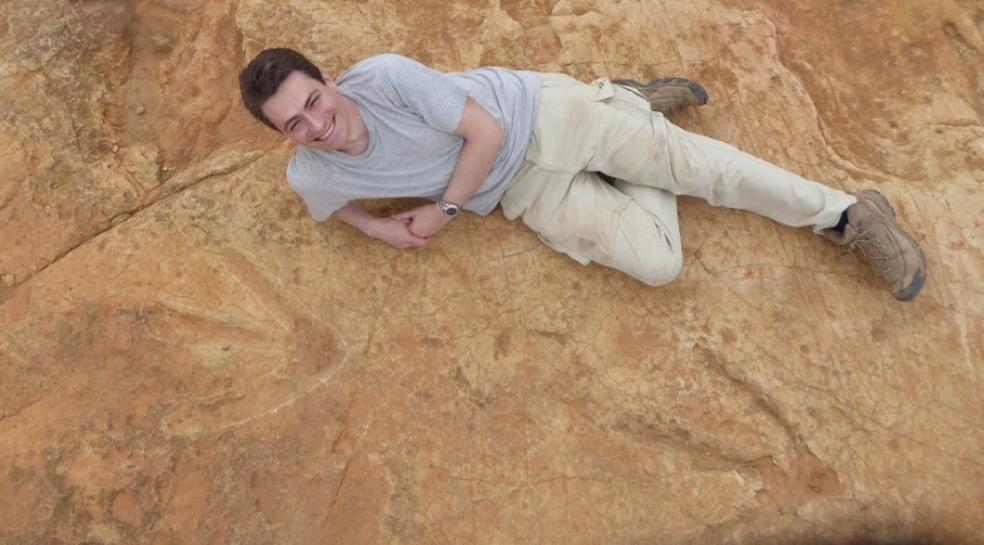 Scientists on Thursday described the footprints from an ancient river bank in Lesotho, and estimated that the dinosaur, which they named Kayentapus ambrokholohali, was about 30 feet (9 meters) long.

No fossilized bones were found, but the footprints alone showed a lot about the animal. The scientists concluded it was a large theropod — the two-legged carnivorous dinosaur group that included later giants like Tyrannosaurus and Giganotosaurus — but that it was more lightly built than those brutes. The theropod group also gave rise to birds.

Kayentapus lived early in the Jurassic Period, shortly after a mass extinction that doomed other large reptilian terrestrial predators that lived in the preceding Triassic Period, when dinosaurs first appeared.

“Our finding corroborates the hypothesis that theropods reached a great size relatively early in the course of their evolution, but apparently not before the Triassic-Jurassic boundary,” said paleontologist Fabien Knoll, of the Dinopolis Foundation in Spain and the University of Manchester in Britain.

There are no skeletal fossils of meat-eating dinosaurs this large so early in the dinosaur evolutionary history. It lived on the ancient southern hemisphere super-continent of Gondwana.

There are other fossilized footprints from Poland that indicate a similar-sized theropod inhabited the northern super-continent of Laurasia around the same time.

Theropods of similar size do not appear in the fossil record until 30 million years later, Knoll said.

The footprints were found on what was once a river bank, bearing telltale ripple marks and desiccation cracks.

“It is the first evidence of an extremely large meat-eating animal roaming a landscape otherwise dominated by a variety of herbivorous, omnivorous and much-smaller carnivorous dinosaurs,” added paleontologist Lara Sciscio of the University of Cape Town in South Africa.

The research was published on Wednesday in the journal PLOS ONE.

In separate research, other scientists on Thursday described another new dinosaur, a plant-eater called Matheronodon provincialis, that lived 70 million years ago. Its fossils were unearthed in southern France.

Matheronodon is distinctive for its large teeth with a chisel-like cutting edge that provided a powerful shearing action like scissors to eat tough vegetation, said paleontologist Pascal Godefroit of the Royal Belgian Institute of Natural Sciences in Brussels.

That research was published in the journal Scientific Reports.