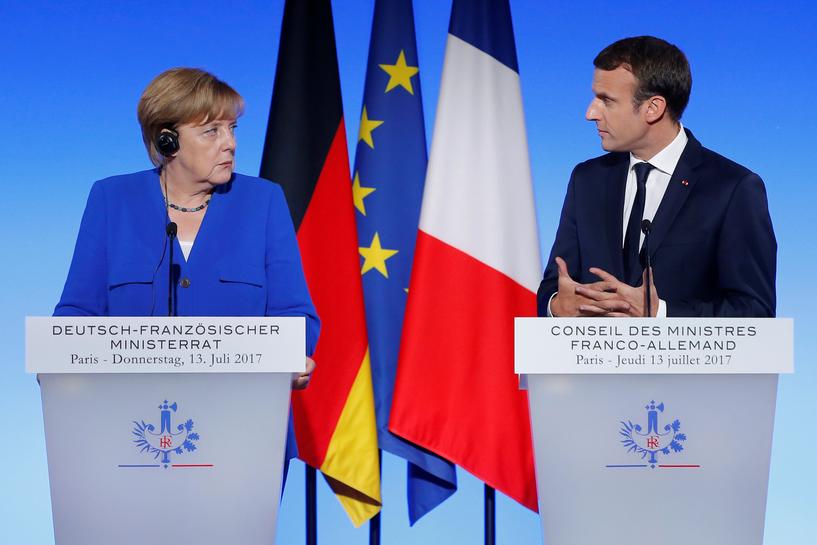 PARIS (Reuters) – When the French and German governments meet on Thursday in a joint cabinet meeting in Paris, the big prize will be any progress harmonizing their tax systems as advances on broader euro zone reform look unlikely.

The two countries are due to launch a 1 billion euro ($1.14 billion) fund to finance digital investments, President Emmanuel Macron said in an interview with regional newspaper L’Ouest France. There are also plans for support research and development nanotechnologies and batteries, he said.

However, real progress on economic integration could be achieved if the two euro zone heavyweights agree on concrete steps for harmonizing the way corporate taxes are assessed.

France and Germany have long pushed for convergence in the way taxes are calculated in the euro zone, but have made little progress even agreeing among each other.

German business newspaper Handelsblatt said finance ministers from both countries would present a roadmap by mid-September on how to align the basis for assessing corporate tax.

The plan would be finalised by December and could then be adopted next year, Handelsblatt added, citing sources involved in the negotiations.

Going beyond taxes, broader economic convergence in the euro zone could prove tricky. Macron told regional daily L’Ouest France that changes to the EU’s governing treaties were needed, a process that has in the past proved a tortuous endeavor.

The emergence of big internet companies that reduce their tax bills by domiciling their EU tax bases in countries with the lowest rates has given a new impetus to efforts to harmonize taxation.

A French court struck down on Wednesday the tax administration’s demand for Google to pay backtaxes worth 1.1 billion euros, ruling that Google Ireland Limited was not subject to corporate and value-added taxes for the period under consideration, from 2005-2010.

“The fact that each EU country has different tax rates is a permanent invitation to groups to locate in places where they pay the least tax,” Prime Minister Edouard Philippe said on France Culture radio.

“In a well-functioning union, we would ideally have similar tax systems, if not identical at least better harmonized than today,” Philippe added.

Finance Minister Bruno Le Maire said on Sunday that the European Union had to ensure big U.S. internet companies such as Google paid their share of taxes.