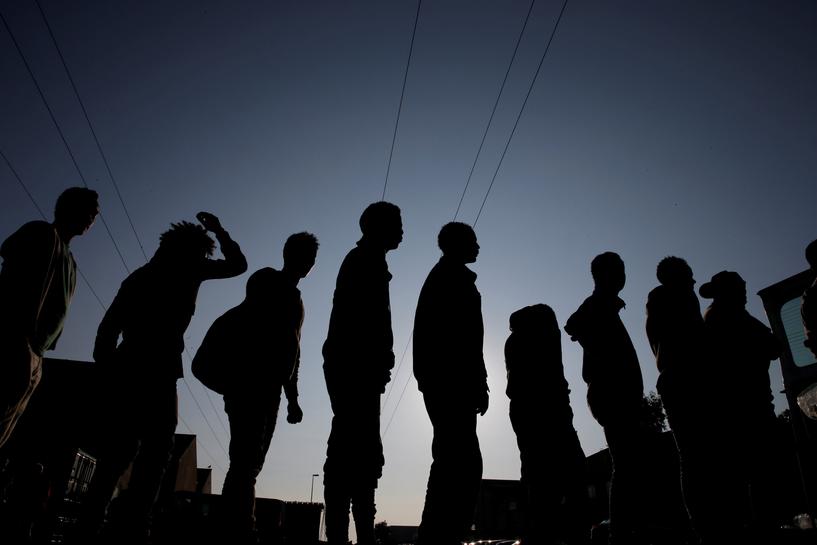 PARIS (Reuters) – Getting Europe’s migrant crisis under control will be in focus at a summit of Europe’s “big four” continental powers and three African nations in Paris on Monday, with French President Emmanuel Macron seeking concrete action.

The 28-nation European Union has struggled to agree on a coherent answer to the influx of migrants fleeing war, poverty and political upheaval in the Middle East and Africa, and the crisis is testing cooperation between member states.

Over the summer, Macron sought to take the initiative on managing the flow of migrants crossing the Mediterranean from Libya, mainly into Italy. He proposed hotspots in Africa to handle asylum requests.

The viability of such centers was questioned by European and African allies and on Monday an official from the Elysee Palace said the idea was no longer under discussion.

“The hotspots announcement was nonsense and neither Chad nor Niger were consulted beforehand,” a West African official said. “Macron is trying to make up for that mistake.”

Leaders at the meeting will seek accord on a migration action plan, notably on tackling the economic model of people traffickers. “The leaders will be presented a roadmap that outlines … what we want to do to tackle all stages of the migrant route,” the Elysee official told reporters.

“NEED TO DO MORE”

The meeting hosts the leaders of Germany, Italy and Spain as well as the leaders of Chad, Niger and Libya – all three of them transit countries for migrants. EU foreign policy chief Federica Mogherini will also attend.

The Elysee official said the roadmap would include ideas on fighting people traffickers, asylum rights and stabilizing chaotic Libya, where thousands of migrants end up before embarking on a perilous Mediterranean sea journey to Europe.

But diplomats and analysts said they did not expect any major breakthroughs.

The crisis has put Paris and Rome at odds. Italy has accused France and other EU states of not sharing the migrant burden and has also asked the EU Commission for more budget flexibility to help it tackle the crisis.

Nearly 120,000 migrants, including refugees, have entered Europe by sea so far this year, according to the International Organization for Migration. More than 2,400 have drowned while making the dangerous odyssey, often in overcrowded dinghies run by people smugglers without enough food or water.

An Italian government official said he hoped the Paris meeting would accelerate the dispersal of EU funds that have already been promised to Libya.

“More generally, Italy and Germany have pledged funds to Libya and to other African countries to try and get control of immigration, but France and Spain need to do more.”

Germany said on Monday it had reached an agreement with Egypt to stem the flow of migrants from the Arab country to Europe.

“What is important is the joint goal of Germany and Egypt to protect people’s lives and to fight illegal immigration and the criminal smuggling of people,” German government spokesman Steffen Seibert told a news conference.

A Niger presidential source said his country, one of the world’s poorest, would be looking for more European financing to help with general security measures.