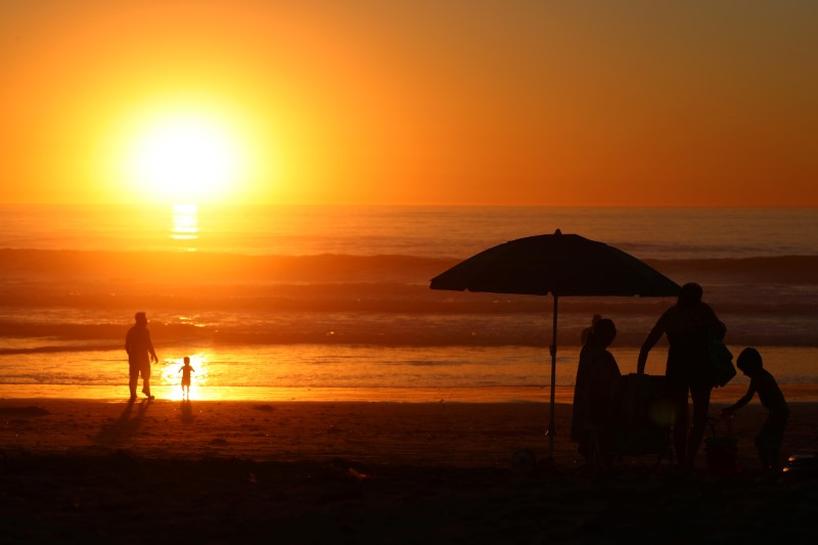 (Reuters) – Nearly two-thirds of Americans, mostly in Western states and on the Eastern seaboard, have endured more days of extreme summer heat over the past 10 years than in previous decades, a leading environmental group said in a study unveiled on Tuesday.

Families cool off at sunset in Solana Beach following a record setting day of temperatures according to local media, in Southern California, U.S., October 23, 2017. REUTERS/Mike Blake

The analysis compared daily summertime high temperatures recorded at thousands of U.S. government weather stations across the country from 2007 through 2016 with the same data in the years 1961 to 1990, and showed a pattern of more frequent extreme heat nationally.

The study, issued by the Natural Resources Defense Council, identified 21 states and the District of Columbia as being the hardest hit. In each one, at least 75 percent of residents now face more than nine summer days in which temperatures are higher than the top 10 percent hottest days of June through August during the 1960s, ‘70s and ‘80s, according to the report.

The group said its findings add to a growing body of evidence that climate change attributed to emissions of heat-trapping “greenhouse” gases, caused by fossil fuel combustion and other human activities, is having direct consequences that are being felt today.

The NRDC also cited government data showing 65,000 people end up in U.S. hospital emergency rooms each summer from heat-related illnesses and that summer heat waves were to blame for at least 1,300 deaths across 40 major U.S. cities from 1975 to 2004.

A women jogs along the ocean after sunset in Solana Beach following a record setting day of temperatures according to local media, in Southern California, U.S., October 23, 2017. REUTERS/Mike Blake

“This analysis gives a sense of the degree to which the present is really not like the past,” said Kim Knowlton, a senior NRDC scientist. “Climate change is fueling more extremely hot days and poses a clear and present threat to public health.”

Release of the NRDC study coincided with an October heat wave in Southern California that has led forecasters to predict record highs for Tuesday’s World Series opener at Dodger Stadium in Los Angeles. Authorities also have warned of elevated risks of wildfires and heat-induced ailments across the region.

California is one of 11 Western states ranked by the NRDC report as the most affected by extreme summer heat. But the current bout of blistering triple-digit temperatures came as an early fall phenomenon linked to the region’s seasonal hot, dry Santa Ana winds.

The NRDC report was accompanied by an interactive U.S. map showing the growing extent of extremely hot summers – affecting nearly 210 million people – and projections for more of the same across much of the country (here#/map).

The trend poses the greatest risk to children, the elderly and others vulnerable to respiratory distress and dehydration, said Dr. Samantha Ahdoot, a pediatrics professor at the Virginia Commonwealth University School of Medicine.