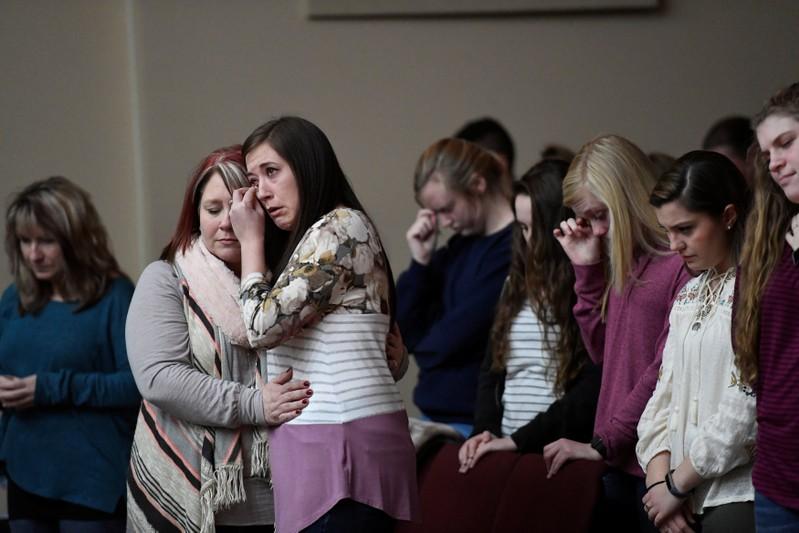 (Reuters) – When a teenaged boy opened fire in a Kentucky high school, he claimed the lives of two young, well-liked sports enthusiasts and traumatized a small farming town, where investigators on Wednesday tried to piece together the shooter’s motive.

Police have not yet identified the 15-year-old gunman in the Tuesday morning attack at Marshall County High School in Benton, Kentucky, about 120 miles (190 km) northwest of Nashville, Tennessee.

Fourteen other students suffered were wounded, and another four high schoolers suffered non-gunshot wounds in the panic. It was the latest outbreak of gun violence in a nation where school shootings have become frequent.

The suspect, who police said was arrested without a struggle, was due to appear in court by Thursday.

Prosecutors intend to ask the court to charge the suspect as an adult, Jason Darnall, an assistant county attorney for Marshall County, told a news conference on Wednesday.

The youth will be charged with two counts of murder and multiple counts of assault, Darnall said. A grand jury will meet on Feb. 13 and will decide whether to proceed with the case, he said.

“Until that point everything remains confidential,” Darnall said.

The slain students were identified by state police as Bailey Holt and Preston Cope, both 15, state police said.

Students attend a prayer vigil for students killed and injured after a 15-year-old boy opened fire with a handgun at Marshall County High School, at Life in Christ Church in Marion, Kentucky, U.S., January 23, 2018. REUTERS/Harrison McClary

The teens’ enthusiasm for sports was evident from photos shared online by friends. Holt was a fan of the University of Louisville’s Cardinals football team. Cope played Little League baseball for the Calvert City Sluggers, in another small town more than 10 miles (16 km) north of Benton.

“My thoughts and prayers are with Bailey Holt, Preston Cope, their families, and all of the wounded victims who are in recovery,” President Donald Trump wrote on Twitter on Wednesday, saying he had spoken to Kentucky Governor Matt Bevin.

Bevin posted a tweet saying that the families whose children were victims “will get through this but it’s going to come at a cost and there will be scars.” He reiterated a call for people not to speculate publicly on the motives behind the shooting.

The suspect entered a common area in the school on Tuesday, pulled out a handgun and began firing at students, state police said.

The attack at the school of nearly 1,150 students was the latest eruption of gunfire that has become a regular occurrence at schools and college campuses across the United States over the past several years.

The injured comprised five female and 13 male students, all 14 to 18 years old.

Five victims were still receiving care at Vanderbilt University Medical Center in Nashville on Wednesday. Hospital officials said four of those were in critical but stable condition. The fifth was in stable condition.