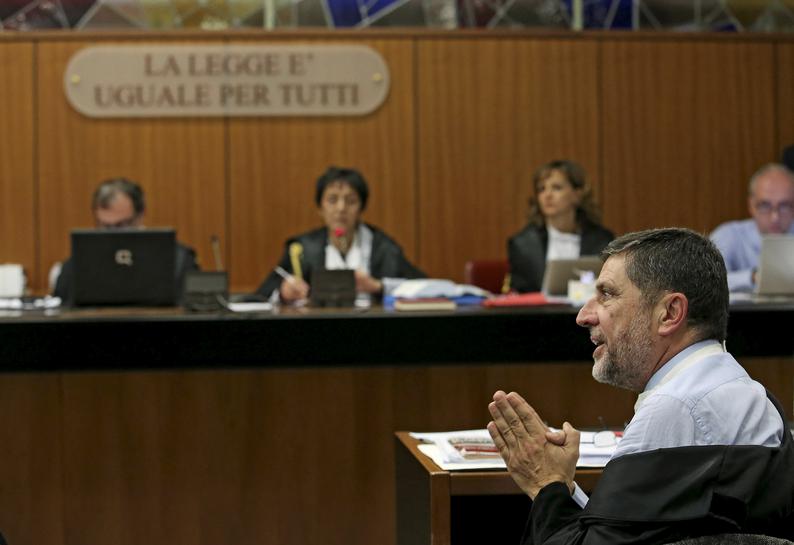 ROME (Reuters) – The two leaders of a crime ring that plundered Rome city coffers were convicted along with some 40 politicians, officials and businessmen on Thursday at the end of one of the biggest corruption trials in the Italian capital.

Massimo Carminati, a one-time member of Rome’s notorious far-right Magliana Gang, was handed a 20-year prison sentence and his sidekick Salvatore Buzzi, a convicted murderer, was given 19 years.

But even though it was dubbed the “Mafia Capital” trial, the court did not convict any of the defendants of “Mafia association”, downgrading the severity of the charges in a major setback for the prosecution.

Prosecutors had tried to link the gang to the Sicilian Mafia and liken its methods to traditional organised crime clans in a bid to win longer sentences and expand the use of anti-mafia legislation beyond its application to well-known, established groups such as the ‘Ndrangheta or the Camorra.

The court ruled that the defendants were guilty of what Italian law considers “simple” criminal association.

“There was nothing about the Mafia in this trial,” said Ippolita Naso, Carminati’s lawyer, smiling broadly after a judge had read out the sentence.

Prosecutor Paolo Ielo said he would appeal the ruling.

The trial opened in a high-security prison on the outskirts of Rome in November 2015 and has been spread out over 230 sessions. The reading out of the verdicts was broadcast live on national television.

Ielo had asked for sentences of 28 years for Carminati, who lost an eye in a police shootout in the early 1980s, and 26 years and three months for Buzzi.

Gang members were accused of infiltrating Rome city hall and using bribery and intimidation to get their hands on lucrative public contracts, including those for the running of centres housing immigrants who have flooded into Italy from Africa.

The investigation laid bare systemic corruption in the city as politicians, bureaucrats and businessmen hooked up with lowlife criminals to rig public tenders.

The corruption was seen as the one of the causes of the disrepair and degradation Rome has fallen into in recent years, with streets full of pot holes, piles of garbage and unkempt public gardens where weeds grow as tall as a person.

A number of those convicted were businessmen and mid-level city hall officials.

The current mayor, Virginia Raggi of the anti-establishment 5-Star Movement, who attended Thursday’s closing session, said the verdict represented a victory for Rome.

“We always need to keep our guard high because what has been proved today is that there is a criminal organisation capable of heavily influencing policy-making in this city, and we are paying the consequences of it,” she said.

The court cleared five of the original 46 defendants.