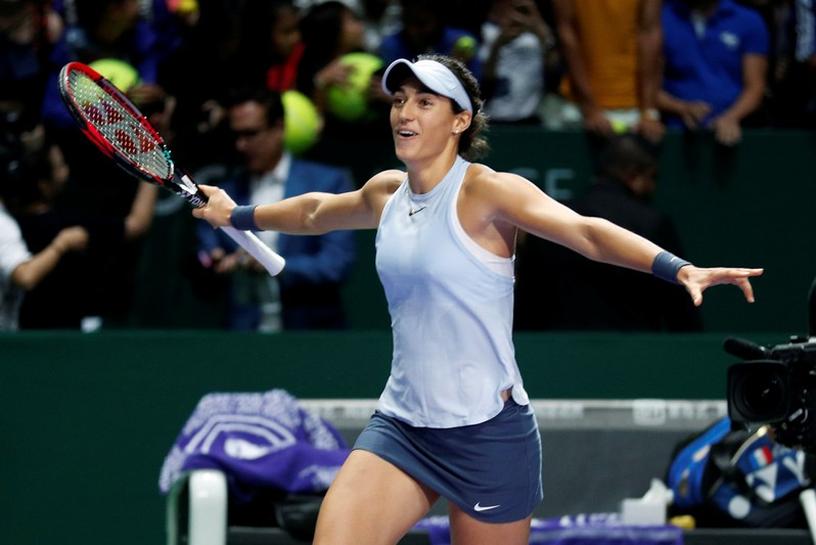 SINGAPORE (Reuters) – Caroline Garcia produced a stunning comeback to grind down Caroline Wozniacki 0-6 6-3 7-5 to stay alive at the WTA Finals on Friday, the Frenchwoman rallying for her second Red Group triumph in a row on her tournament debut.

The world number eight’s victory eliminated Elina Svitolina, who has lost her first two matches, with the Frenchwoman now needing the Ukrainian to beat Simona Halep in Friday’s second match to continue her run through to the semi-finals.

Should the Romanian world number one triumph over Svitolina, she will advance along with Wozniacki, who was assured of a semi-final berth after easily winning her opening two matches in the Red Group.

Friday’s match started as expected with Wozniacki, whose serve had been impenetrable all week, opening with a love hold before the Dane attacked the slow-starting Frenchwoman, who coughed up a couple of forehand errors to gift her an early break.

Wozniacki had recorded two ‘bagels’ in the wins over Svitolina and Halep, and the 27-year-old chalked up a third 6-0 set in as many matches after just 22 minutes of dominant action.

However, much as she had in her comeback win over Svitolina, Garcia regrouped to finally get a foothold in the match in the second set, deploying her devastating forehand to full effect to fashion three breaks of serve as Wozniacki’s levels dipped.

As the match drifted into a decider, the Dane rediscovered her range. She began to assert pressure on Garcia’s weaker backhand side and was rewarded with an early break.

But the Frenchwoman was fighting tooth and nail to stay in the tournament and covered every inch of the court to tie it up at 5-5 on her third break point as Wozniacki attempted to serve for the match in a thrilling 10th game.

Garcia once again dug deep to recover from 0-40 down in the 11th game edge ahead in the decider and the Frenchwoman sealed a memorable victory on her second match point when a Wozniacki backhand sailed long.

“The first set she was playing amazing and I was a little bit down, not believing enough and she gave me nothing,” Garcia, who has now won 13 of her last 14 matches, said in a courtside interview.

“Then at the start of the second set, I felt I had nothing to lose and increased my intensity and was able to find my rhythm and finish well.”

Karolina Pliskova won the White Group, with Venus Williams joining her in the semi-finals as runner-up after the American edged out Garbine Muguruza on Thursday.