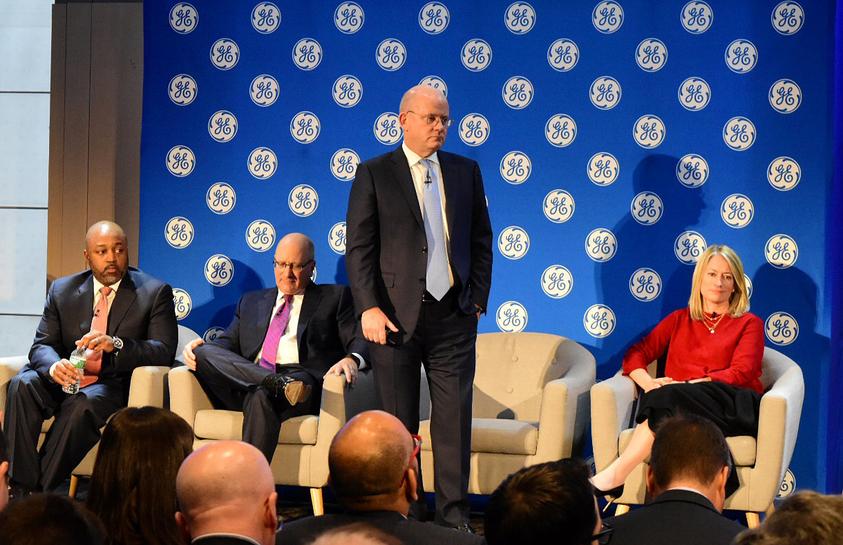 (Reuters) – General Electric Co will radically shrink to focus on aviation, power and healthcare, betting on sectors where it thinks it can make a profit, as the largest U.S. industrial group tries to end more than 15 years of share price stagnation.

The 125-year-old company cut its dividend and profit outlook in half as it begins the transition, in a plan unveiled by new Chief Executive John Flannery.

It will also shed 25 percent of its corporate staff, meaning 1,500 job losses at its Boston headquarters.

GE shares fell 7.7 percent to $18.90, its lowest in more than five years, as investors worried that a years-long transformation would not pare down enough expenses or generate as much cash as they hoped.

“They need to cut more cost,” said Scott Davis, an analyst at Melius Research. “GE is still a bloated company with duplicate costs up and down the organization.”

GE stock has effectively been dead money since September 2001, when recently retired Chief Executive Jeff Immelt took over, posting a negative total return even after reinvesting its juicy dividends. Once the most valuable U.S. publicly traded company, GE now has a market value of $168 billion, less than a fifth of Apple Inc.

Flannery, who took over as CEO on Aug. 1, said he was “looking for the soul of the company again” and would focus on “restoring the oxygen of cash and earnings to the company.”

The transition likely means the sale of $20 billion of assets. GE will jettison businesses with “a very dispassionate eye,” Flannery said, keeping only units that offer growth, a leading market position and a large installed base.

That could mean exiting businesses like oil and gas, lighting and transportation, closing factories around the globe, analysts said.

GE plans to get rid of its 62.5 percent stake in oilfield services company Baker Hughes, only months after making the multi-billion dollar investment. It will get out after the end of 2019, the earliest it can do so under the deal, which closed in July.

Flannery offered no quick fixes for investors. He said power, one of the businesses GE would focus on, was “challenged,” but could be turned around in one to two years.

The troubled GE Digital unit, on which Immelt bet billions of dollars, needed a more focused strategy based on selling apps to customers in its core businesses of power, aviation and healthcare, according to Flannery. He said GE would cut spending on the unit by $400 million in 2018, down from $2.1 billion in 2017.

Flannery added that some of its healthcare IT business, such as software for imaging and hospital staff scheduling, were still critical to the company and not likely to be divested.

The dividend cut to 12 cents per share from 24 cents is only the third in the company’s 125-year history and the first not in a broader financial crisis, expected to save about $4 billion in cash annually.

The cut will save GE $4.16 billion in payouts, the eighth biggest dividend cut in history among S&P 500 companies, according to Howard Silverblatt, senior index analyst of S&P Dow Jones Indices. GE also had the biggest cut when it slashed its dividend by $8.87 billion in 2009, Silverblatt said.

The move to make GE smaller and nimbler is a turnaround from the previous multi-business approach taken by former CEOs Jack Welch and Jeff Immelt.

Flannery’s changes repudiate much of Immelt’s vision of a “digital industrial” company that builds software to manage and optimize GE’s jet engines, power plants, locomotives and other products.

Conglomerates have long been out of favor on Wall Street, where investors prefer to bet on specific industries rather than a mixed portfolio. GE is the worst-performing Dow component this year, down 35 percent through Friday’s close.

GE forecast 2018 adjusted earnings per share of $1 to $1.07 per share, compared with its earlier estimate of $2 per share. Wall Street was expecting $1.16, according to Thomson Reuters I/B/E/S.

Flannery’s strategy is a turning point for the company, which over several decades built itself into a sprawling conglomerate with interests across media, energy, banking, aviation, railroads, marine engines and chemicals.

GE executives have said that analysts have undervalued the company’s digital business. They argue the digital units should be valued more like Amazon.com Inc, Alphabet Inc’s Google and other fast-growing tech companies.

(For a graphic on ‘Top five dividend yields in the Dow 30’ click reut.rs/2zx3aoR)

Singapore can be ‘a more digital, more resilient advanced manufacturing base’ for the world: DPM Heng
Myanmar ex-political prisoners turn counsellors to ease COVID-19 isolation
Electronics sector continues to grow despite COVID-19, offered more than 2,800 opportunities since April: MOM
Commentary: Making S$30,000 a month from sneakers? This is why nobody likes resellers
US State Department Names Special Coordinator for Tibetan Issues