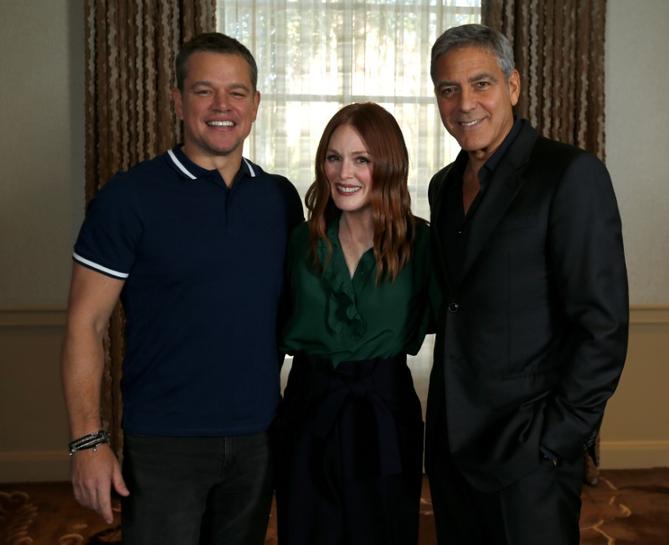 LOS ANGELES (Reuters) – As one of Hollywood’s most famous celebrities, George Clooney is not afraid to use his platform to speak up on issues close to him, but do not expect the actor to enter the political arena anytime soon.

“I’ve always been around and involved in politics and believe that we all have to participate one way or another. But no, I‘m not going to get into it,” Clooney told Reuters.

“I don’t have to answer to any one person. I don’t have to make compromises, I can point the finger at whomever I think needs to be pointed out,” he added.

In his latest film “Suburbicon,” Clooney directs a darkly humorous 1950s crime tale in which he points the finger squarely at the racial tensions in present-day America with a story about a black family moving into an affluent white suburban neighborhood as the backdrop.

“I think we should constantly be talking about whether or not building walls and scapegoating of minorities is how we want to be represented,” Clooney said.

“I think the best way to do that is to remind ourselves that this is something that we do, that we’ve been doing probably since the beginning of our country and that we have to constantly litigate it,” he added.

“Suburbicon,” out in U.S. theaters on Friday, follows Gardner Lodge (Matt Damon) in the aftermath of a terrifying break-in at his suburban home, which results in the suspicious death of his wife.

As the investigation into the tragedy deepens, Gardner and his wife’s twin sister Maggie (Julianne Moore) find themselves in a situation quickly escalating beyond their control.

“This was probably the darkest role I’ve ever had a chance to play, which is very liberating,” Damon said.

Clooney said that while there are “people much better qualified to tell the story of African-Americans in mid-20th century suburbia,” he wanted to use the story of the Mayers family – based on a real black family that moved into the all-white suburb of Levittown, Pennsylvania in 1957 – to shine a light on the absurdity of racism.

“The pinnacle of white privilege is my character driving around the neighborhood on a bicycle covered in blood murdering people and nobody’s looking at him because they’re all focused on the Mayers family and blaming them for all their problems,” Damon said.

US warns China will use Olympics to gloss over abuses
Commentary: Why do some children choose unhealthy food when they get older?
2 foreign climbers die on Everest
Australian judge upholds temporary ban on Indian travel
Hong Kong Freezes Assets of Pro-Democracy Media Magnate Jimmy Lai