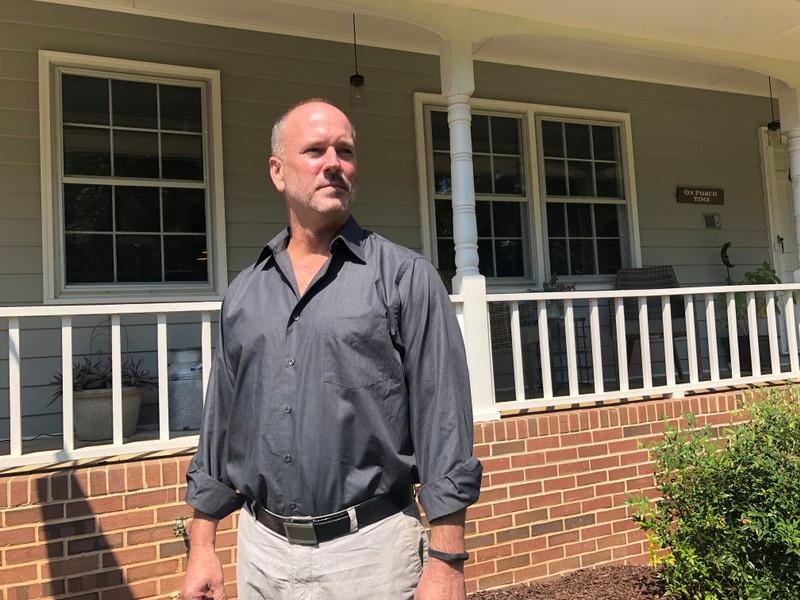 DORAVILLE, Ga. (Reuters) – Months after joining the gay-friendly Hotlanta Softball League, Gerald Bostock was out of a job in a Georgia county government office and was convinced he had become the victim of workplace discrimination based on his sexual orientation.

Gerald Bostock, who says he lost his job because he is gay, poses outside his home in Atlanta, Georgia, U.S. September 9, 2019. REUTERS/Lawrence Hurley

Proud of his job as an advocate for children caught up in the juvenile justice system in Clayton County in suburban Atlanta, Bostock said he was shocked when he was abruptly fired in 2013, an action that figures prominently in a major LGBT rights fight coming before the U.S. Supreme Court next month.

“I was devastated. I had just lost the job I had loved – my passion. I lost my source of income. I lost my medical insurance,” Bostock, 55, said in an interview at the house he shares with his partner in Doraville, located just northeast of the capital city of this southern U.S. state.

Bostock, who was recovering from prostate cancer at the time, was escorted out of the Clayton County Youth Development and Justice Center building after being fired, and never returned. “I don’t even remember driving home,” Bostock said.

He believes that joining the league drew attention to his sexual orientation and that his firing was motivated by anti-gay sentiment. The county has denied it discriminated against Bostock and defended its decision to fire him.

The Supreme Court is set to hear arguments on Oct. 8 in three related cases including Bostock’s on whether gay and transgender people are protected from workplace discrimination by a landmark civil rights law.

Title VII of the Civil Rights Act of 1964 bars employers from discriminating against employees on the basis of sex as well as race, color, national origin and religion. At issue in these three cases is whether the protections against sex discrimination cover gay and transgender people.

Bostock, after losing in lower courts, is asking the conservative-majority Supreme Court to let him bring a federal discrimination lawsuit against the county seeking monetary damages over his firing.

“I’m willing to be the one to stand up so that anyone that wants to work or has the ability to work can do so without living in fear of being fired for who you are or who you love,” Bostock said.

Bostock worked for Clayton County for a decade – managing a program to recruit volunteers to help represent the interests of children in the criminal justice system – until being fired after he started participating in the recreational softball league for fun. The league was formed in 1981 as a “safe inclusive environment” for LGBT people to play softball.

Soon after joining the Hotlanta league, Bostock said, he heard at least one senior staff member in his office make negative comments about his sexual orientation.

Three months later, the county launched an audit of the program he managed. Bostock said the audit looked in part at his expenditures to take prospective volunteers out for dinner, including other participants in the Hotlanta league.

A spokesman for Clayton County declined to comment on the firing, citing the ongoing litigation. But lawyers for the county said in court papers he was dismissed for “legitimate, non-discriminatory reasons” based on the audit.

“The county denies that Bostock’s sexual orientation was a motivating factor in its decision to conduct an audit of the program he managed or its decision to terminate his employment after the audit was completed,” the lawyers added.

The two other cases the Supreme Court will hear raise similar issues.

One involves a now-deceased New York skydiving instructor named Donald Zarda who was fired by his employer in 2010 after revealing he was gay. The other involves a Detroit funeral home’s bid to reverse a lower court’s ruling that it violated the Civil Rights Act by firing a transgender funeral director named Aimee Stephens after Stephens revealed plans to transition from male to female.

Big business, typically eager to avoid liability in employment disputes, is backing the LGBT plaintiffs in the three cases. More than 200 companies, including Amazon, Alphabet Inc’s Google and Bank of America Corp, joined a friend-of-the-court brief asking the justices to rule in favor of the plaintiffs.

The current patchwork of state and local anti-discrimination laws harms the ability of businesses to recruit and retain top talent, the companies argued.

“Businesses and their employees all benefit from the consistency and predictability that uniform federal law provides nationwide,” the companies said in their brief.

THE DEFINITION OF ‘SEX’

The legal fight centers on the definition of “sex” in the Civil Rights Act.

“The courts don’t get to rewrite the law. They get to apply it,” said John Bursch, a lawyer with the conservative Christian legal group Alliance Defending Freedom, who will argue at the court on behalf of employer R.G. & G.R. Harris Funeral Homes Inc in the transgender case.

The Supreme Court delivered a landmark gay rights decision in 2015 legalizing same-sex marriage nationwide. But its dynamics on LGBT issues have changed following the 2018 retirement of Justice Anthony Kennedy, a conservative who backed gay rights in several major cases and wrote the same-sex marriage ruling.

The Title VII cases represent the court’s first major test on gay and transgender rights since Trump appointed conservative Justice Brett Kavanaugh to replace Kennedy on a court with a 5-4 conservative majority, with the four liberal justices sympathetic to LGBT rights. Kavanaugh, whose approach to gay rights is unclear, could provide a pivotal vote.

Trump, strongly supported by evangelical Christian voters, has undermined gay and transgender rights since taking office in 2017. His administration has supported the right of certain businesses to refuse to serve gay people on the basis of religious objections to gay marriage, restricted transgender service members in the military and rescinded protections on bathroom access for transgender students in public schools.

Now working as a mental health counsellor at nearby Georgia Regional Hospital, Bostock said he will not give up his fight for gay rights even if the Supreme Court rules against him.

“I’m a firm believer,” Bostock said, “in throwing positivity out into the universe.”

Reporting by Lawrence Hurley; Editing by Will Dunham

Malaysia’s king says parliament can convene during emergency
Indonesian orangutans airlifted back to the wild
Singapore could expand progressive wage model to retail sector
Hong Kong Politicians ‘Must Love The People’s Republic of China,’ Official Warns
Commentary: China is in no position to take Taiwan by force