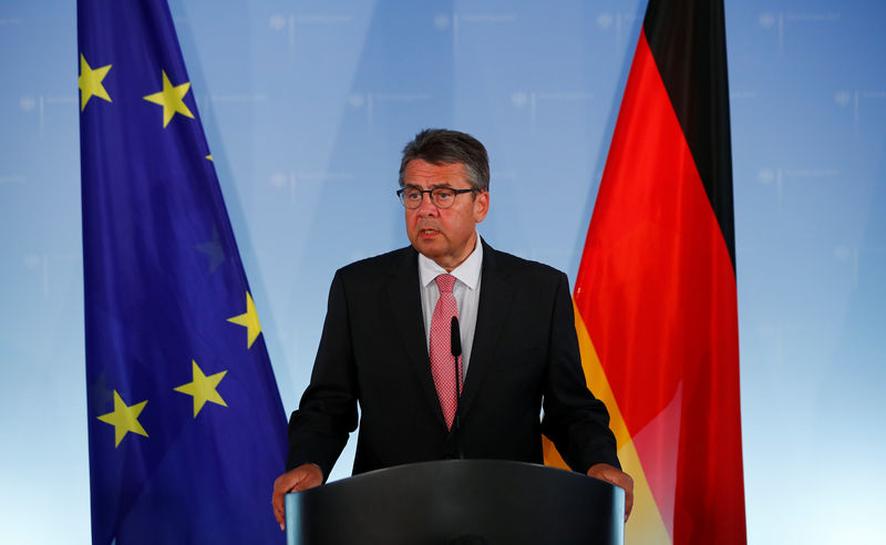 BERLIN (Reuters) – Germany told its citizens on Thursday to exercise caution if traveling to Turkey and threatened measures that could hinder German investment there, in a sign of growing impatience with a NATO ally after the detention of rights activists.

Foreign Minister Sigmar Gabriel highlighted alarm at what Berlin sees as the growing unpredictability of Turkish President Tayyip Erdogan. “Everyone can be affected. The most absurd things are possible,” he said in advice to travelers.

Gabriel broke off his holiday to deal with the crisis after Turkey arrested six human rights activists including German national Peter Steudtner on accusations of terrorism, the latest in a series of diplomatic rows.

“We need our policies towards Turkey to go in a new direction…we can’t continue as we have done,” Gabriel told reporters in unusually direct language touching on sensitive commercial matters including corporate investment guarantees.

The Turkish foreign ministry said it would make the “necessary response” to comments it described as one-sided.

Foreign Minister Mevlut Cavusoglu later accused Germany of harboring members of the Kurdistan Workers Party (PKK), which has fought an insurgency in southeast Turkey since 1984, and the network of U.S.-based cleric Fethullah Gulen that Ankara blames for a failed coup last July.

“As a country providing shelter to PKK and FETO terrorists in its own territory, statements by Germany are just double standards and unacceptable,” Cavusoglu said on Twitter.

Gulen has denied involvement in the coup attempt.

Erdogan says a crackdown, in which roughly 50,000 people have been detained and 150,000 sacked or suspended from the judiciary and journalism to academia, was essential after the failed coup. Domestic and foreign critics accuse him of using a state of emergency as cover to root out opposition.

Juergen Hardt, a senior member of Chancellor Angela Merkel’s conservative party, said the EU candidate country had now “left the path to Europe”. “No one invests in a country…in which the judiciary has been degraded to be a helper of the ruling AKP party,” he said.

Many companies have also been seized since the coup attempt on allegations of links to terrorism.

German Foreign Minister Sigmar Gabriel addresses a news conference in Berlin, Germany, July 20, 2017, after he has interrupted his summer vacation and returned to Berlin to discuss a deepening crisis in relations with Turkey over the arrest of human rights activists.Fabrizio Bensch

The foreign ministry in Ankara said Turkey would not make concessions on its judicial independence and struggle against terrorism “for financial matters such as loans, funds or the (European) Customs Union”.

Cavusoglu criticized Gabriel’s remarks, saying threats and blackmail would find no answers in Turkey, and that Germany and Turkey needed to focus on their long-term mutual goals instead.

“We don’t see such threats against Turkey as worthy of a serious country,” Cavusoglu told reporters in Cyprus.

Erdogan’s spokesman Ibrahim Kalin suggested Gabriel’s remarks were intended to win votes at national elections in two months. “They need to rid themselves of this abdication of reason and think rationally.”

German Foreign Minister Sigmar Gabriel addresses a news conference in Berlin, Germany, July 20, 2017, after he has interrupted his summer vacation and returned to Berlin to discuss a deepening crisis in relations with Turkey over the arrest of human rights activists.Fabrizio Bensch

Gabriel’s warnings to private as well as business travelers could deal a significant blow to the tourism industry. So far this year, bookings from Germany have accounted for some 10 percent of Turkey’s tourists.

In its new guidance, the foreign ministry said: “People who are traveling to Turkey… are urged to exercise increased caution, and should register with German consulates and the embassy, even for shorter visits.”

Last year, the number of foreign visitors to Turkey fell to 25.4 million amid a spate of bombings by Kurdish and Islamist militants, the lowest in nine years. The travel sector contributes about $30 billion to the economy in a normal year.

Erdogan’s spokesman rejected the suggestion that Germans traveling to Turkey faced any danger. “It is also not acceptable to create doubts in the minds of German investors in Turkey,” Kalin said.

In comments that threatened broader economic consequences, Gabriel said he could not advise companies to invest in a country without legal certainty where “even completely innocent companies are judged as being close to terrorists”.

“I can’t see how we as the German government can continue to guarantee corporate investments in Turkey if there is the threat of arbitrary expropriation for political reasons.”

On Wednesday, newspaper Die Zeit said Turkish authorities had several weeks ago handed Berlin a list of 68 German companies they accused of having links to Gulen.

They included chemicals giant BASF, which confirmed it was on a list that had been passed to it by German police, but declined to comment on the allegations.

Germany was Turkey’s top export destination in 2016, buying $14 billion worth of Turkish goods. It was also the second biggest source of Turkish imports, at $21.5 billion. Only China, at $25.4 billion, exported more to Turkey.