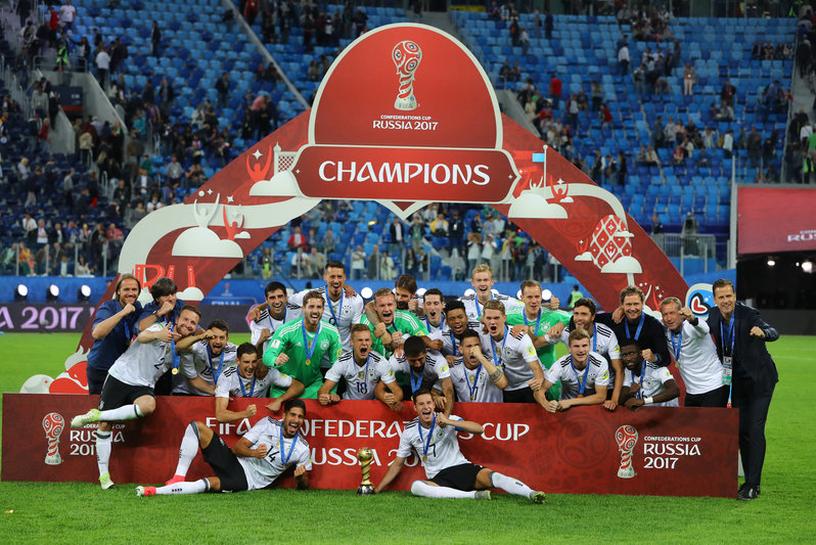 ST PETERSBURG Germany survived a whirlwind assault by Chile and capitalized on an awful mistake by the South Americans to claim a 1-0 victory in a pulsating, bad-tempered Confederations Cup final on Sunday.

Germany won the title for the first time after Lars Stindl scored the only goal in the 20th minute when Chile midfielder Marcelo Diaz gave the ball away on the edge of his own area.

Chile, playing with their trademark high octane style and driven forward by another relentless display by Arturo Vidal, dominated the match but were let down by poor finishing.

A dramatic game featured missed chances, defensive howlers, scuffles and two video reviews, one producing a highly controversial outcome in the second half.

Chile defender Gonzalo Jara elbowed Timo Werner by the touchline and Serbian referee Milorad Mazic, alerted by the video assistants, let him off with a yellow card instead of a red.

Shortly afterwards, Mazic turned down Chilean appeals for a penalty, stood by his original decision after another review incident and booked Eduardo Vargas for drawing an imaginary television screen.

It was a remarkable achievement for Germany to lift the trophy with a young, experimental squad, although it could also be a bad omen as no team has ever won the World Cup after winning the Confederations Cup the year before.

Chile flew into the game in their inimitable style and Alexis Sanchez should have put them in front, but shot wide from close range after keeper Marc-Andre ter Stegen parried Vidal’s shot.

Germany struck almost immediately as Diaz lost the ball on the edge of his penalty area to Timo Werner who slipped it through for Stindl to score into an open goal.

Chile kept missing their chances, continued to look vulnerable on the break and nearly gifted Germany another goal before halftime when Jara gave the ball away in defense, but this time Claudio Bravo saved Leon Goretzka’s shot.

Germany were happy to contain Chile and play on their mistakes in the second half, although they were living dangerously at times.

Substitute Angelo Sagal scooped the ball over the bar from close range and Ter Stegen pushed away an Alexis Sanchez free kick in almost the last action of the game.

“We put our ideas into practice,” said Chile coach Juan Antonio Pizzi. “We took the initiative, we took control and created chances…. but because of one of those things, those accidents, that happen in football, it was our turn to lose.”