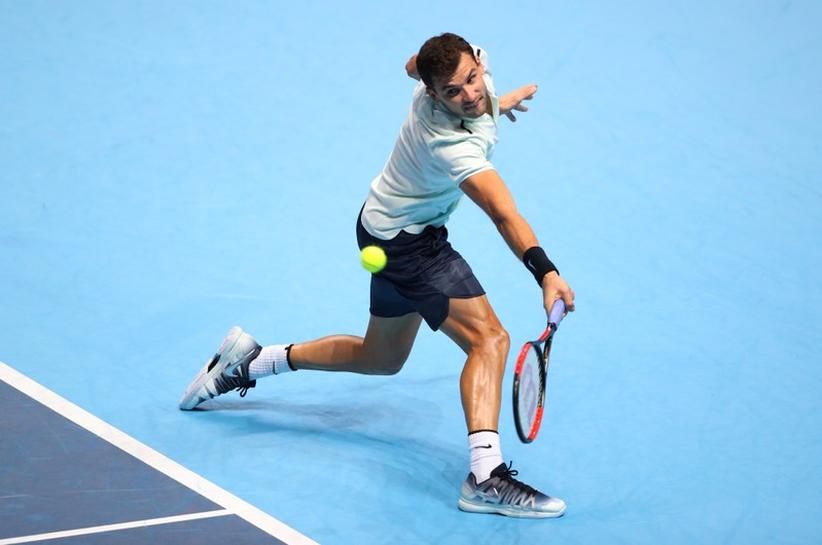 LONDON (Reuters) – The spirit was as strong as ever but Rafael Nadal’s troublesome knee failed him in the end as the Spaniard quit the ATP Finals after a painful defeat by Belgium’s David Goffin on Monday.

Nadal, at 31 the oldest player to finish a year ranked number one, fought until the last point, saving four match points in a compelling Pete Sampras Group clash, before losing 7-6(5) 6-7(4) 6-4 in two hours and 37 minutes.

World number eight Goffin, the first player from Belgium to qualify for the year-ending tournament in its 48-year history, was a bundle of nerves at times but finally steadied himself to put Nadal out of his misery with his 14th ace.

Nadal could be seen grimacing as the match wore on, especially when he was forced wide or low, but he still managed to scrap his way back from 4-1 down in the decider, despite apparently playing on one leg.

Minutes after defeat, the 16-times grand slam champion told reporters that he was pulling out of the tournament.

“My season is finished. I had a commitment with the event, with the city, with myself. I tried hard. I did the thing that I had to do to try to be ready to play,” Nadal, whose right knee flared up at the recent Paris Masters, said.

The Mallorcan, whose career has been plagued by tendonitis, made a stunning comeback from a wrist injury this year when he reached the Australian Open final, then claimed a 10th French Open title after a three-year grand slam drought.

He then went on to win the U.S. Open and reclaim the world’s top ranking for the first time since 2014.

“I really believed that I don’t deserve after this great season to spend two more days on court with this terrible feeling, that’s all,” said Nadal, who will now try to recover for the start of next season.

Goffin completed a great day for first-time qualifiers after Bulgarian Grigor Dimitrov prevailed in a superb tussle with Austrian Dominic Thiem at the 02 Arena.

It was a shame that his first win against a world number one was overshadowed by Nadal’s misfortune because the nimble Belgian thoroughly deserved his win, even if he nearly blew it.

“It’s the best win of my career,” Goffin, who will lead Belgium in the David Cup final against France, said. “It was tough even if he was not moving 100 percent.”

Goffin was the better player throughout. He broke Nadal’s serve twice in the first set, only to hand back the advantage on both occasions with lame double-faults.

A crunching forehand winner at 5-5 in the tiebreak earned him a set point and Nadal then dumped a backhand into the net.

Another clean winner gave him a 5-3 lead in the second set but again he double-faulted when serving for the match.

His first match point arrived in the next game but he missed a forehand. Goffin had three more when Nadal served at 5-6, 0-40 but the Spaniard produced two magical winners to stay alive before rolling through the tiebreak.

Earlier Dimitrov beat Thiem 6-3 5-7 7-5 in the so-called “battle of the backhands” despite some late jitters.

The world number six served for the match at 5-4 in the decider but was broken to love before two consecutive double faults by Thiem gave him another chance to close it out.

Again Dimitrov wobbled, squandering two match points at 40-15 with a double-fault and a tight forehand error, but he finally bagged the win when Thiem looped a backhand long.