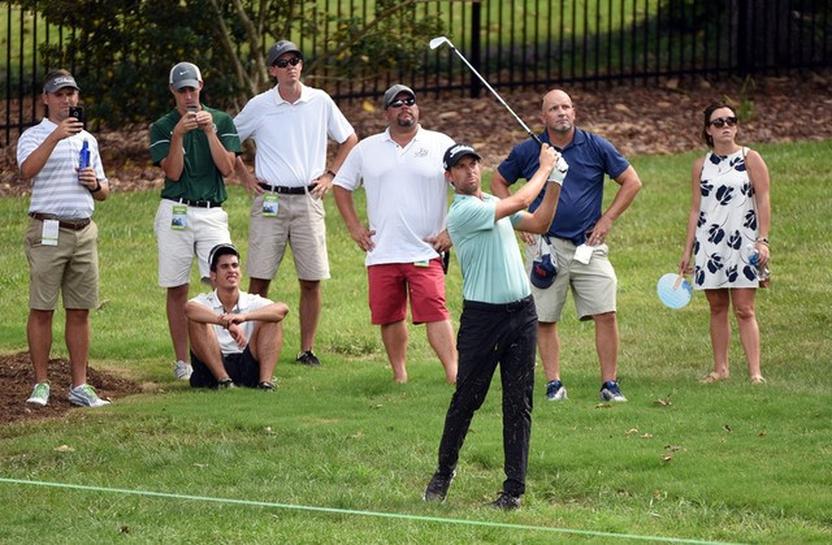 GREENSBORO, North Carolina (Reuters) – Webb Simpson recovered from two consecutive bogeys to join fellow American Ryan Armour in the lead on 13-under par after the second round at the Wyndham Championship on Friday.

Simpson, the 2011 champion, carded 64, while Armour went even lower with a nine-birdie, nine-under-par 61 in ideal if sweltering conditions at Sedgefield Country Club.

They led by one stroke from Swede Henrik Stenson, who eschewed a driver for the second straight day while carding 66.

Simpson, who was born a one-hour drive east of the course in Raleigh and now lives 90 minutes west in Charlotte, enjoys playing in his home state.

“Having a lot of people out here rooting for me is a great thing but I’ve got to remember at the end of the day to take care of my business and make a lot of birdies,” said Simpson, the 2012 U.S. Open champion.

“It’s hard to back up a good day like yesterday (63) with a 64, but I actually think I played a little better today.”

Co-leader Armour, a 41-year-old journeyman, needs to finish no worse than second this week in the final regular-season event of the season to keep his PGA Tour card for next year.

The best round of his career, thanks to four consecutive late birdies, was a step in the right direction, his sizzling form the result of an equipment change, he said, with new shafts helping him achieve a higher ball flight.

“The ball is getting up in the air a little better and it allows me to keep the rhythm that I want,” said Armour. “I want to be a shot-maker out there and not always have to hit the full shot.”

Stenson, beating the worst of the oppressive heat with his morning start, picked up five birdies on the short 7,127-yard, par-70 Donald Ross-designed course.

“I was fighting the swing a little bit out there but I still produced quite a lot of good iron shots and gave myself a good number of chances,” said world number nine Stenson, the highest-ranked player in the field.

“I still managed to produce some good stuff and when I didn’t, which was mainly off the tee, a couple of loose shots, I managed to scramble and keep it tidy anyway,” added the 2016 British Open champion.

“I didn’t make as many putts as yesterday but I still played a decent round.”

First-round leader Matt Every made a miserable start, dropping three shots in his first two holes en route to a 72 that left the American six shots off the pace.

Reporting by Andrew Both; editing by Ken Ferris