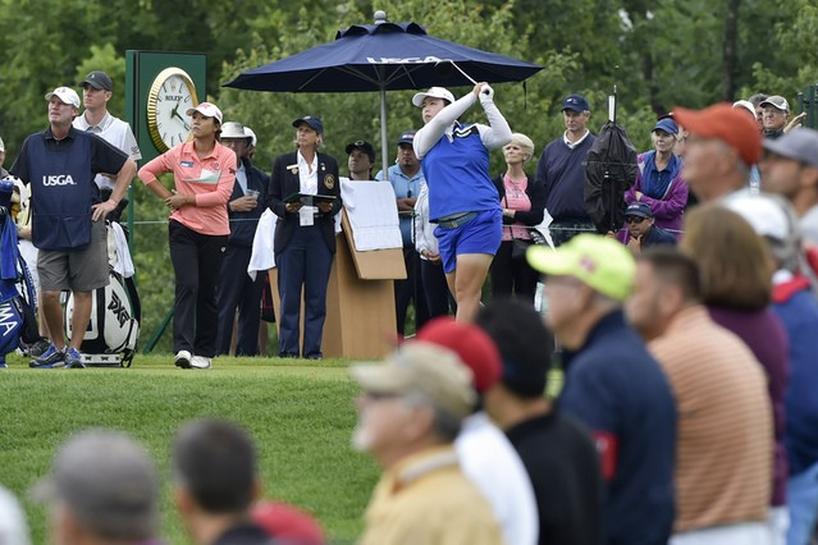 BEDMINSTER, New Jersey (Reuters) – Overnight leader Shanshan Feng of China found it a bit crowded at the top on a rainy Friday morning as Korean Lee Jeong-eun shot a three-under 69 to join her at six under par at the U.S. Women’s Open.

As the third women’s major of the year braced for the expected arrival of U.S. President Donald Trump, owner of the Trump National layout hosting the event, Lee showed off the form that has brought her rousing results on the Korean LPGA Tour.

Known in Korea as Lee Jeong-eun6, as the sixth player with that name to have played on the Korean tour, the 21-year-old has 10 top-10s from 14 events, including a win at the Lotte Rent a Car Ladies Open and a pair of runner-up finishes.

“Right now, it’s my first time in the LPGA and I’m really surprised that I played really well at the U.S. Open,” Lee, whose fan club back home is called Lucky 6, told reporters through an interpreter.

Feng, who shot an opening 66, was teeing off alongside former number one Lydia Ko (68) for the second round as Lee introduced herself to the media as the clubhouse leader in her first appearance on U.S. soil at Trump National Golf Club.

“I’m very nervous because it is my first time to the United States,” said world number 40 Lee. “I’m nervous .. because I’m not sure if I could finish well in the last two days.”

Lee said she likes to use the numeral ‘6’ after her name to avoid confusion. “There are some confusions but as of now there’s only ‘5’ and ‘6’ currently playing, which makes it a little better.”

The other Lee Jeong-eun, a 28-year-old who joined the LPGA Tour in 2015, is not likely to qualify for the weekend after a second-round 76 for six-over 150.

Asked about her game, Jeong-eun6 said: “My iron shots are great. My short game became better, and overall I don’t have much misses. That’s why I made so many top-10s and a win in Korea.”

Lee, who is here with her mother, her usual caddie and her agent, was asked if she had ever played golf in front of the South Korean President like some of the Americans may at Trump Bedminster.