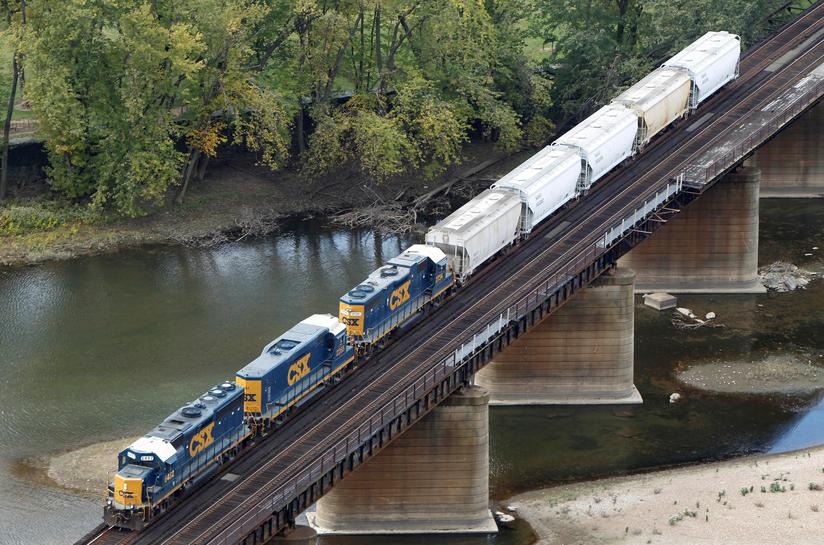 SEATTLE (Reuters) – The investigative arm of the U.S. Congress is launching a probe into the safety of increasingly long freight trains being operated by CSX Corp (CSX.O), Union Pacific Corp (UNP.N) and other major U.S. railroads to boost profitability, the U.S. Government Accountability Office (GAO) said.

Train length is currently unregulated. Any push to add rules would likely face stiff industry opposition because railroads use longer trains to boost margins through the better use of fuel, locomotive power, and rail cars without having to add extra crew.

In addition to the GAO study, safety regulator the Federal Railroad Administration (FRA) has beefed up its presence at CSX rail yards, according to CSX employees and SMART Union Chairman Dale Barnett, citing conversations with FRA inspectors.

FRA spokesman Marc Willis declined to characterize concerns over CSX train length but said any appearance of increased inspections is due partly to safety complaints and a spike in railroad accidents or incidents.

“In recent months, there have been accidents involving long trains which are currently under investigation by the NTSB and the FRA,” Willis said.

The GAO will launch its study on safety and other impacts of longer trains in February, GAO spokesman Chuck Young told Reuters on Tuesday. The action was prompted by a Nov. 7 letter, seen by Reuters, from U.S. Representatives Peter DeFazio and Michael Capuano, both Democratic members of the House Transportation Committee.

DeFazio said his office has received complaints over safety and traffic jams at rail crossings.

CSX, the No.3 U.S. railroad by revenue, told investors in October its freight trains have increased more than 400 feet to 6,833 feet (2.08 km) on average since March, when newly appointed Chief Executive Officer Hunter Harrison launched his plan to boost profits and streamline operations.

FRA data shows CSX’s train accidents and incidents as a portion of miles traveled at the highest level in a decade after climbing in each of the last five years. (tinyurl.com/ybf6bqyy)

SMART Union transportation division spokesman John Risch told top rail regulator the Surface Transportation Board (STB) at an October hearing on CSX service problems the average U.S. train is up to 1.5 miles long (2.41 km), but CSX has routinely operated trains two or even three miles long since Harrison took over.

CSX spokesman Bryan Tucker said the industry trend toward longer trains is a “tried and proven way to increase efficiency.”

The latest concerns follow the fiery derailment of a 178-car CSX freight train in Hyndman, Pennsylvania in August, and the Nov. 27 derailment of a CSX train with 192 cars – nearly 2 miles long excluding locomotives – in Lakeland, Florida, spilling hazardous molten sulfur.

The FRA told Reuters it is also investigating the June derailment of a 13,147-foot CSX train in Crestline, Ohio.

National Transportation Safety Board rail division head David Bucher told Reuters train length and build were “an important part of the investigation” into the Hyndman crash, adding he was hesitant to draw conclusions about an ongoing investigation.

“Train lengths are increasing across the country,” Bucher said. “It is becoming more and more common, not just with CSX.”

The NTSB, FRA, and STB do not collect data on train length, except for specific accidents or mediations.

The American Association of Railroads (AAR) declined to comment.

“They (FRA inspectors) do more blitzes than they used to, where several inspectors will show up in a place and stay for a couple days,” the manager added.

Commentary: My walk around Singapore was a step outside my comfort zone – and I’m all the better for it
NUS Tembusu College rector Tommy Koh backtracks less than 2 hours after saying he will offer to resign over Fernando incident
Commentary: Hong Kong and Singapore air travel bubble could be a game-changer
Indian farmers step up illegal fires as Delhi air crisis worsens
Indonesia Deports 4 Uyghur Terrorism Suspects to China, Experts Say