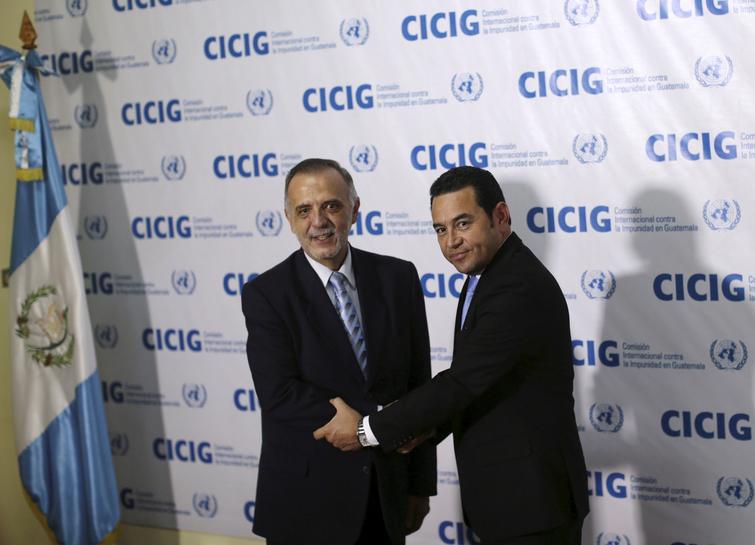 GUATEMALA CITY (Reuters) – Guatemalan President Jimmy Morales on Sunday appeared to defy a court ruling that he not expel the head of an influential U.N. anti-graft unit investigating his campaign financing, deepening an institutional crisis in the Central American nation.

Earlier on Sunday, the president said Ivan Velasquez, head of the International Commission Against Impunity in Guatemala, or CICIG, must leave the country immediately. Hours later, the nation’s top court suspended the decision.

In a nearly four-minute address in which he was flanked by Guatemalan flags, Morales accused Velasquez of exceeding his mandate. He said the decision to expel him was a matter of foreign policy and therefore the responsibility of the executive, not the courts.

In the charged atmosphere, hundreds of Guatemalans took to the streets, mostly to defend Velasquez outside his offices and in the center of Guatemala City, although some groups came out in support of the president and against foreign interference.

Velasquez, a veteran prosecutor who previously investigated drug cartels and paramilitary groups in his home country, Colombia, remained in his office on Sunday afternoon, where he was meeting with supportive foreign ambassadors.

The U.S. State Department said it was “deeply concerned” about the move against the anti-corruption unit, echoing criticism by the United Nations, Europe and Canada. Several senior members of Morales’ government resigned over the issue.

In its ruling, the country’s highest civil court said the foreign, defense and interior ministers should not participate in removing Velasquez from the country. Two constitutional experts consulted by Reuters said the president would be committing a crime if he does not obey the court.

With powers to prepare crime and corruption cases, CICIG was instrumental in removing Guatemala’s former president, Otto Perez Molina, from office in 2015 after identifying him as a key player in an alleged multimillion-dollar corruption racket.

Morales, a former comedian, came to power in 2016, winning the election on an anti-corruption ticket.

Morales’ declaration that Velasquez was “persona non grata” came days after CICIG said the president should be investigated over alleged illicit funding during his election campaign. CICIG is investigating some $800,000 in allegedly unexplained contributions to Morales’ campaign. Morales has denied any wrongdoing.

CICIG has been a thorn in the president’s side since it started a graft probe focused on his elder brother and one of his sons.

Many politicians in Guatemala consider the foreign-led body, which is unusual among U.N. bodies for its powers to bring cases to prosecutors, to be a violation of national sovereignty. Anti-corruption activists credit it with cleaning up government.

It is responsible for the arrests of at least 15 current and former members of Congress on corruption charges.

“You’ve taken a position in favor of impunity and the corrupt sectors of the country, contradicting all of the statements you once made about justice and transparency,”

Health Minister Lucrecia Hernandez wrote in the letter, also signed by three vice ministers who resigned with her.

Guatemala has struggled to thwart corruption and organized crime since it ended 36 years of civil war in 1996, and memories have not faded of ruptures with democracy under a military government in the 1980s.

U.N. Secretary General Antonio Guterres said in a statement he was “shocked” by Morales’ move, and called on Guatemalan authorities to treat Velasquez with respect. In a joint statement issued by the U.S. Embassy, a group of nine Western countries and the European Union strongly backed Velasquez and criticized Morales’ move to oust him.

Representative Eliot Engel of the U.S. House of Representatives Foreign Affairs Committee said he was “extremely disappointed” by Morales’ decision and called on the State Department and Congress to examine the future of U.S. assistance to the Guatemalan government.

“CICIG has played a transformational role in combating corruption and impunity in Guatemala,” he said in a statement.

Top US envoy: Terror threat has ‘moved’ from Afghanistan
IN FOCUS: Thinking out of the cubicle – What lies ahead for hybrid working?
In traffic-choked Jakarta, volunteer motorcyclists help ambulances weave through congestion
China Airs TV ‘Confession’ of Belizean Accused of Funding Hong Kong Protests
Bangladesh cracks down on Islamist hardliners after India PM protests