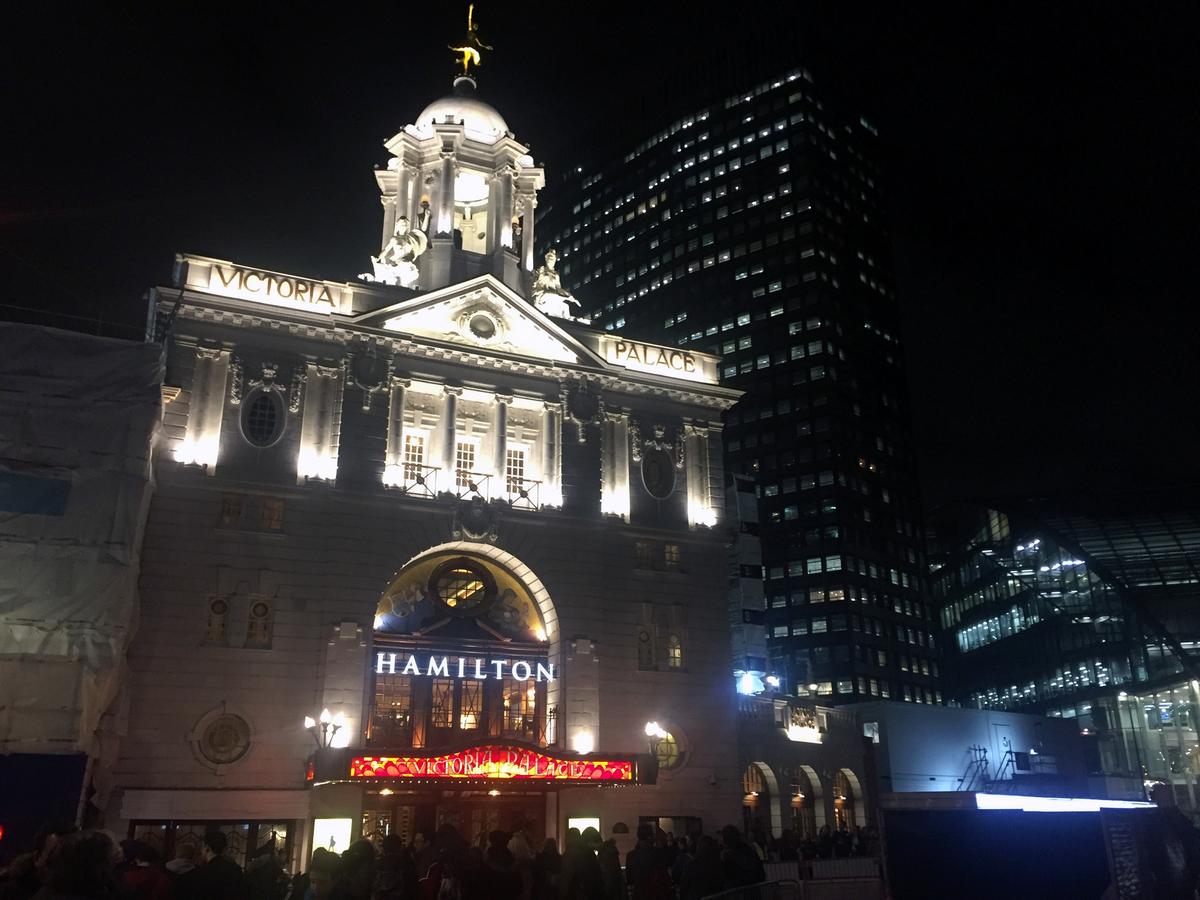 LONDON (Reuters) – They may have been casting off the yoke of British rule, but the cast of Broadway smash “Hamilton” nonetheless received a rapturous reception from a star-studded, 1,500-strong audience at the show’s official opening night in London on Thursday.

Fans gather outside the Victoria Palace theatre ahead of the opening-night performance of Lin-Manuel Miranda’s musical “Hamilton” in London, Britain December 21, 2017. REUTERS/Mark Hanrahan

The show, created by Lin-Manuel Miranda, is an unconventional take on the life of Alexander Hamilton, one of the founding fathers of the United States, featuring a racially diverse cast and a hip-hop-inflected score.

Though the show is rooted firmly in the 18th and 19th centuries, Miranda feels that its themes of legacy and how one spends time on earth still resonate with contemporary audiences.

“That’s what Hamilton and (antagonist Vice President Aaron) Burr are wrestling with the whole time, and I think that’s what people are responding to,” Miranda told Reuters.

Miranda, who played the title role on Broadway, took to the stage after the performance to thank the cast and crew.

Addressing media coverage of the show’s runaway success, he said: “I never want to see the words ‘overnight success’ associated with this show,” saying that his relationships with collaborators on the project dated to 2002.

“Breaking Bad” star Bryan Cranston, who also attended the performance, described the show as “a masterpiece,” adding that it was “striking a chord with the younger generations and that’s what we need in the theatre.”

The play is notable for casting black, Asian and Latin actors to play the roles of white historical figures.

The title role, which was originally played by Miranda, who is of Puerto Rican descent, was filled by Londoner Jamael Westman, who has Irish and Jamaican heritage.

The London production, housed in the newly refurbished Victoria Palace theatre, is the show’s first foray outside of the United States after successful runs in Chicago, San Francisco and Los Angeles, as well as New York.

The Broadway production won 11 Tony awards and netted Miranda a Pulitzer Prize in 2016.

Any uncertainty about whether British audiences would share their American counterparts’ enthusiasm for the show was quickly assuaged by a remarkable demand for tickets, which London’s Guardian newspaper reported were being offered by re-sellers for up to 6,000 pounds ($8,000).

The show’s depiction of an effete King George III, Britain’s ruler during the U.S. revolutionary war, also drew some of the biggest laughs of the night from the British crowd.