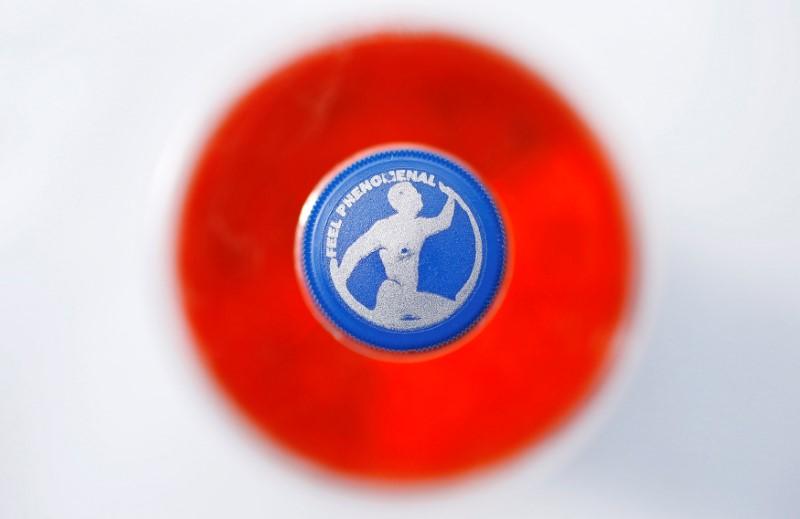 EDINBURGH (Reuters) – It’s known as Scotland’s second national drink, but a change in the secret recipe for Irn Bru, a sticky-sweet fizzy beverage prized as a hangover cure, has prompted outrage among its many devotees.

FILE PHOTO: A bottle of Irn-Bru is seen in Edinburgh, Scotland May 2, 2014. REUTERS/Suzanne Plunkett/File Photo

Once sold under the macho slogan “Made in Scotland from Girders!”, the drink was actually 10 percent sugar. But manufacturer AG Barr (BAG.L) has decided to halve that to make Irn Bru less vulnerable to new anti-obesity regulations and higher taxes.

Ryan Allen, who described the drink as a “national treasure”, is behind an online petition calling on the company to reverse its decision. “Hands off our IRN BRU” has more than 8,000 supporters.

“I believe that a responsible adult should have the choice as to what poisons they want to put in their body,” he told BBC radio, adding that he had stockpiled the classic version.

“I’ve got 24 glass bottles in my loft that will do me for emergencies.”

FILE PHOTO: A boy drinks a can of Scottish soda, Irn Bru, as he and other members of the Kelso pipe band prepare to play in the Flodden Border Relay in Kelso, southern Scotland September 5, 2013. REUTERS/Toby Melville/File Photo

AG Barr, based just outside Glasgow, said last autumn it would cut the amount of sugar in Irn Bru at the start of 2018 to just below 5 grams per 100 ml from 10 grams.

That followed a British government decision to impose a levy on makers of sugary drinks. Replacing some of the sugar with sweeteners will take Irn Bru out of the top tax band and reduce its calorie count to about 66 from 140, the manufacturer said.

For Allen, the world is a tough enough place without messing with his favourite soft drink.

“It’s … well known to alleviate the effects of a hangover and is many a persons’ craving, saviour or go-to drink after a night on the tiles,” he said.

“I think to deny people in that condition their crutch would be a crime.”