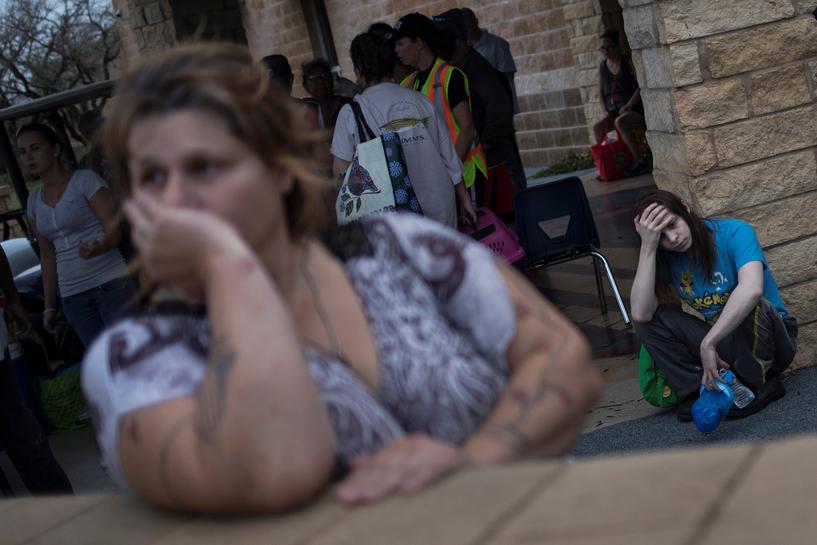 ROCKPORT, Texas (Reuters) – Rescue crews raced against rising floodwaters on Sunday to pull hundreds of stranded residents from their homes in southeast Texas as Harvey, the most powerful storm to hit the state in more than 50 years, roared inland.

The storm has killed at least two people and Harris County Sheriff Ed Gonzalez said on Twitter early on Sunday the death toll could rise, with his deputies responding to reports of submerged vehicles on Interstate 10, one of them possibly with a deceased woman and child inside.

The second confirmed fatality from Tropical Storm Harvey came on Saturday evening as a woman attempted to drive through flooded streets on Houston’s west side, said Sergeant Colin Howard of the Houston police department.

“It appeared that her vehicle went into high water and she drowned as a result,” he said. The victim was not immediately identified.

Authorities have urged residents to stay off the streets of Houston and other southeast Texas cities as rain falling at up to 5 inches per hour flooded roads and major intersections.

On Friday night, a man died in a house fire in the town of Rockport, 30 miles (48 km) north of Corpus Christi. Another dozen people in the area suffered injuries such as broken bones, another official said.

The Harris County Joint Information center said first responders were conducting hundreds of rescues early on Sunday morning as calls came in across the county.

Gonzalez’ Twitter feed was inundated by residents asking for help and the sheriff could only tell some of them that crews were doing the best they can.

“All agencies care but everyone simply operating at maximum capacity,” he tweeted at one point.

Harvey slammed into Texas late Friday as a Category 4 hurricane with winds of 130 miles per hour (209 km per hour), making it the strongest storm to hit the state since 1961.

It has since lingered over Houston, dumping amounts of rain that threaten to break the record established nearly 40 years ago when Alvin, Texas, was deluged by 43 inches of rain in 24 hours from July 24-25, 1979.

The National Weather Service issued a flash flood emergency alert for the area around William P. Hobby Airport, and the airport said on Twitter that the arrivals section was flooded.

Oil and gas production was largely halted in the state, prompting price hikes at the pumps.

“There are a number of stranded people on our streets, calling 911, exhausting needed resources. You can help by staying off the streets,” Houston Mayor Sylvester Turner said on Twitter.

Cars sit abandoned at a flooded gas station after Hurricane Harvey made landfall on the Texas Gulf coast and brought heavy rain to the region, in Houston, Texas, U.S. August 26, 2017.Nick Oxford

Harvey was downgraded to a tropical storm on Saturday but was expected to lash Texas for days as it lumbers inland, according to the National Hurricane Center, which described the forecast for the state as potentially “catastrophic.”

Rockport, which took a direct hit from the storm, was left with streets flooded and strewn with power lines and debris on Saturday.

A dozen recreational vehicles were flipped over on a sales lot, one blown into the middle of the street. A convoy of military vehicles arrived in the Rockport area on Saturday to help in the recovery efforts, and town officials announced an overnight curfew for residents.

Before the storm hit, Rockport’s mayor told anyone staying behind to write their names on their arms for identification in case of death or injury. A high school, hotel, senior housing complex and other buildings suffered structural damage.

Texas Governor Greg Abbott said he was activating 1,800 members of the military to help with the statewide cleanup, while 1,000 people would conduct search-and-rescue operations.

The Texas Department of Criminal Justice said it was forced to evacuate some 4,500 inmates from three state prisons near the Brazos River because of rising water.

The U.S. Coast Guard said it had rescued 20 people from distressed vessels on Saturday, and was monitoring two Carnival Corp cruise ships carrying thousands of people stranded in the U.S. Gulf of Mexico.

Harvey was a Category 4 hurricane on the Saffir-Simpson scale when it hit the coast, the second-highest category, and the most powerful storm in over a decade to come ashore anywhere in the mainland United States.

It weakened to tropical storm from hurricane strength on Saturday, the U.S. National Hurricane Center said.

Authorities warned of the potentially life-threatening impact of heavy rains between Houston and Corpus Christi over the next several days, with the latest forecast storm track forecasting that Harvey could loop back toward the Gulf of Mexico coast before turning north again on Tuesday.

U.S. President Donald Trump, facing the first big natural disaster of his term, signed a disaster proclamation on Friday. He met with his cabinet and staff on Saturday to discuss the federal reaction to the storm, according to a White House statement.

Several refiners shut down plants ahead of the storm, disrupting supplies and pushing prices higher. More than 45 percent of the country’s refining capacity is along the U.S. Gulf Coast, and nearly a fifth of the nation’s crude is produced offshore in the Gulf of Mexico.