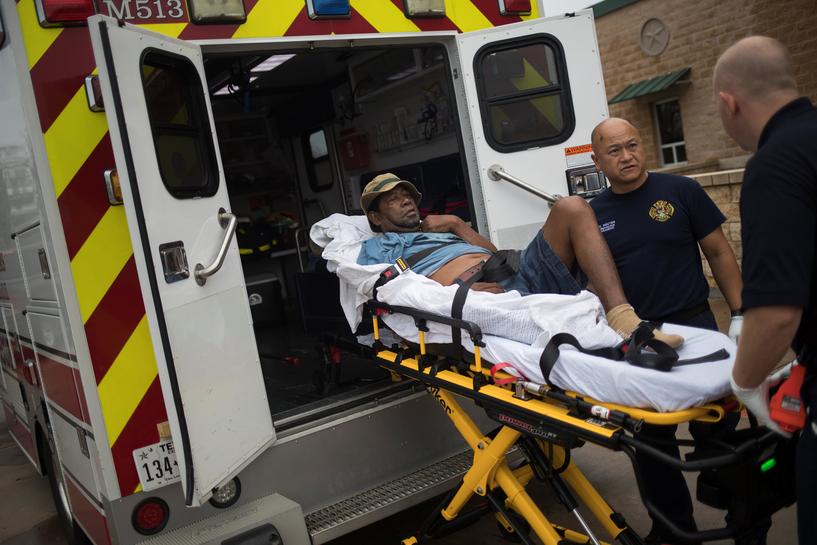 ROCKPORT, Texas (Reuters) – A second person was killed on Saturday as Harvey, the most powerful storm to hit Texas in more than 50 years, roared inland, knocking out power to more than 230,000 people and threatening catastrophic flooding.

The second fatality was identified as a woman who was killed as she drove through flooded streets on Houston’s west side, a Houston police officer said. On Friday night, an unidentified victim died in a house fire in the town of Rockport, 30 miles (48 km) north of Corpus Christi.

Another dozen people in the area suffered injuries like broken bones, another official said.

Harvey slammed into Texas late Friday as a Category 4 hurricane with winds of 130 miles per hour (209 km per hour), making it the strongest storm to hit the state since 1961. It has since lingered over Houston, dumping 2-3 inches of rain an hour onto the city.

The storm ripped off roofs, snapped trees, triggered tornadoes and flash floods and cut off power to some 232,000 people, mostly in the Houston area, on Saturday night. It also largely curtailed oil and gas production in the state, prompting price hikes at the pumps.

Harvey was downgraded to a tropical storm on Saturday but was expected to lash Texas for days as it lumbers inland, bringing as much as 40 inches (102 cm) of rain to some areas, according to the National Hurricane Center, which described the forecast for the state as potentially “catastrophic.”

The Weather Channel reported that rainfall rates in Houston, the fourth most populous city in the United States and home to a third of the 6 million people that could be impacted by Harvey, could reach 5-6 inches per hour, making streets impassable.

Rockport, which took a direct hit from the storm, was left with streets flooded and strewn with power lines and debris on Saturday.

A dozen recreational vehicles were flipped over on a sales lot, one blown into the middle of the street. By Saturday evening, a convoy of military vehicles had arrived in the Rockport area with people and equipment to help in the recovery efforts, and town officials announced an overnight curfew for residents.

Before the storm hit, Rockport’s mayor told anyone staying behind to write their names on their arms for identification in case of death or injury. A high school, hotel, senior housing complex and other buildings suffered structural damage, according to emergency officials and local media.

Texas Governor Greg Abbott said he was activating 1,800 members of the military to help with the statewide cleanup, while 1,000 people would conduct search-and-rescue operations.

The streets of Corpus Christi, a city of about 320,000 people, were deserted on Saturday, with billboards twisted and strong winds still blowing. City authorities asked residents to reduce use of toilets and faucets because power outages left waste water plants unable to treat sewage.

Elsewhere, the Texas Department of Criminal Justice said it was forced to evacuate some 4,500 inmates from three state prisons near the Brazos River because of rising water.

A man, who lost his home to Hurricane Harvey, is loaded into the back of an ambulance in Rockport, Texas, U.S. August 26, 2017.Adrees Latif

The U.S. Coast Guard said it had rescued 20 people from distressed vessels on Saturday, and was also monitoring two Carnival Corp cruise ships carrying thousands of people stranded in the U.S. Gulf of Mexico due to the effects of the storm.

Harvey was a Category 4 hurricane on the Saffir-Simpson scale when it hit the coast, the second-highest category, and the most powerful storm in over a decade to come ashore anywhere in the mainland United States.

Harvey weakened to tropical storm from hurricane strength on Saturday, the U.S. National Hurricane Center said. The center of the storm was barely moving and was less than 150 miles (240 km) from Houston with sustained winds of 60 mph.

“This is serious,” Houston Mayor Sylvester Turner said in a televised interview on Saturday afternoon. “It is important that people stay off the roads.” Turner said the city, which has faced flooding in recent years during smaller storms, is prepared for what he described as a “major water event”.

Authorities warned of the potentially life-threatening impact of heavy rains between Houston and Corpus Christi over the next several days.

The latest forecast storm track has Harvey looping back toward the Gulf of Mexico coast before turning north again on Tuesday.

U.S. President Donald Trump, facing the first big natural disaster of his term, signed a disaster proclamation on Friday. He met with his cabinet and staff on Saturday to discuss the federal reaction to the storm, according to a White House statement.

“President Trump emphasized his expectations that all departments and agencies stay fully engaged and positioned to support his number one priority of saving lives,” according to the statement.

Several refiners shut down plants ahead of the storm, disrupting supplies and pushing prices higher. Many fuel stations ran out of gasoline before the storm hit, and the U.S. Environmental Protection Agency loosened gasoline specifications to reduce shortages.

More than 45 percent of the country’s refining capacity is along the U.S. Gulf Coast, and nearly a fifth of the nation’s crude is produced offshore in the Gulf of Mexico.

Just under 25 percent of Gulf output, or 429,000 barrels per day (bpd) had been shut in by the storm, the U.S. Bureau of Safety and Environmental Enforcement said on Saturday.

(For graphic on hurricanes in the North Atlantic, click tmsnrt.rs/2wwerEh)