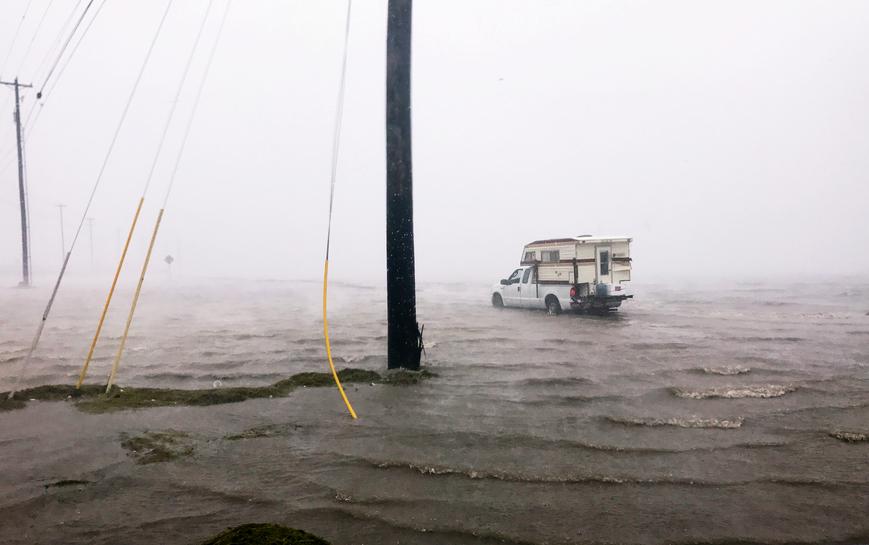 CORPUS CHRISTI, Texas (Reuters) – Craig Uggen stopped short in his white Ford truck on Friday as gusting winds from Hurricane Harvey pushed waves from Corpus Christi Bay over the road. His anxiety rose with the water, now covering half his front wheels.

As he backed onto higher ground, another gust ripped the camper from his truck bed. Uggen had lived in that camper on the beach for the past year.

“I can’t believe I dropped my home in the damn street,” he would say minutes later, shocked at finding himself homeless on Friday with a Category 4 hurricane bearing down on this working-class South Texas city.

The man in the cab next to him, who would only give his name as Travis, had started the day homeless. Uggen had offered to shelter him in his camper when the two met at a convenience store just an hour before.

Their predicament highlights how quickly a natural disaster can make life desperate for those on the margins of society. Travis had planned to stay in Uggen’s camper in part because he believed all the city’s shelters were closed or full.

He was almost correct. Only one shelter, the Good Samaritan Rescue Mission, remained open as the most powerful storm to hit Texas since 1961 approached.

At the mission, about 300 people flowed into a shelter designed to hold about 200. That did not begin to fill the need.

In March, Good Samaritan estimated the total number of homeless people in Corpus Christi at about 8,100, said director Spencer Lowe.

As the storm strengthened, the shelter’s power failed, leaving the staff in the dark and struggling to hold the door open against gusting winds to admit new guests.

“These two people just came in 10 minutes ago,” Lowe said as the wind roared outside and blew debris down the street. “They’ve been out there for hours.”

The staff had visited about 20 places around the city where homeless people were known to live, panhandle or hide from police but found only about 22 people, Lowe said.

Many were eager for help; others turned it down. It remained a mystery where thousands of other homeless people had fled or hunkered down for Harvey.

The city had offered to get people on buses to San Antonio, but there were few takers, Lowe said.

Another shelter run by the Salvation Army evacuated, taking some homeless people out of the city, Good Samaritan staffers said. The rest of the city’s half-dozen shelters closed.

Lowe said he could only hope for the best for thousands of others believed to be homeless in the city.

“If you take that 8,100 people we estimated in March, and there’s only 300 with us tonight …,” he said, pausing. “I just hope they got out, or to a family’s house, or just anywhere out of the elements.”

Harvey was downgraded to a tropical storm on Saturday, the U.S. National Hurricane Center said, but it is expected to linger over Texas for days.

Uggen is not technically homeless, even with the loss of the camper. He has a home in South Louisiana, he said, and a fixed income he earned during many years as an elevator repairman, which allowed him to travel as he pleased. He came to Corpus Christi last year to live in the camper on the beach.

But he was not exactly flush, either. On Friday, he met his companion, Travis, when he asked him for the quarter he needed to buy a beer.

Travis instead offered to buy Uggen all the beer he could drink in exchange for a night in the camper.

The two men had been looking for a bridge to park under when the storm claimed the camper, shattering the back glass of Uggen’s truck and bending its bed.

Travis panicked, calling an acquaintance for a place to stay. But the friend had fled to Dallas.

In time, both men accepted their lot. At least the cooler strapped to the back to the truck had survived, with an assortment of food and drink.

“I was on top of the world yesterday,” Uggen said as he pondered what might come next.

“I got a hotel room right there,” he said, pointing to his weather-beaten truck, sans the camper. “Well, half of one.”

Railway worker saves 6-year-old boy from oncoming train in dramatic rescue in India
New US administration bringing ‘good dynamics’ to the fight against climate change: Grace Fu
Commentary: If true, leaked conversation between Anwar and Zahid reveal backroom dealing
IN FOCUS: Thinking out of the cubicle – What lies ahead for hybrid working?
1 dead, 16 lorry passengers taken to hospital after PIE accident