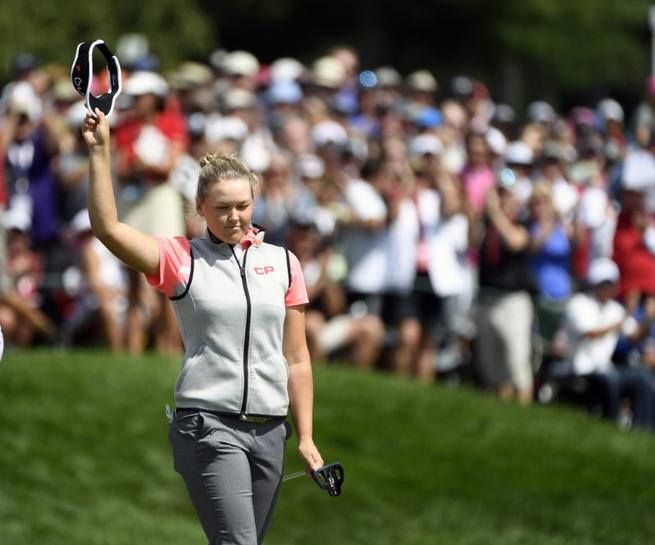 (The Sports Xchange) – Nicole Broch Larsen of Denmark and Mo Martin of the United States are tied for the lead after three rounds of the Canadian Pacific Women’s Open in Ottawa, Ontario, but much of the attention in Saturday’s round focused on Canadian Brooke Henderson, who played herself into contention with a course-record 63.

However, lurking among six players tied at 7-under is Henderson, who moved up from a tie for 59th after Friday’s round with her 8-under-par round.

For the 19-year-old Henderson, who had eight birdies and no bogeys, it was truly moving day.

Henderson is a member at Ottawa Hunt & Golf Club, site of this week’s tournament, but she said she does not keep score when she plays the course, so she does not know whether Saturday’s round was her best on the course.

The 63 tied her lowest-ever score on the LPGA Tour.

“It was just like the perfect day,” said Henderson. “I hit the ball extremely well. Mentally I was right on. I felt in the zone, as a lot of athletes call it. I felt like I was in the best place of mind for me to play my best. That’s always a great feeling. Shots I was hitting them close and making putts and making a lot of birdies. I guess, eight birdies today. On 18 holes of golf, that’s pretty good.”

Henderson birdied the final two holes to complete her round of 63, breaking the previous course record of 64, set by Yani Tseng at the 2008 Canadian Pacific Women’s Open.

“I think everything was going right today. I hit the ball really well. I made a lot of putts and that was really key for me,” she said.

“Coming up 18 I kind of just took a peek around and I didn’t see any green grass outside of the ropes. Everybody was everywhere,” said Henderson. “It’s such an incredible feeling. Being so close to home makes this week so much more special.”

Tied with Henderson at 7-under are Mi Jung Hur of South Korea, Shanshan Feng of China, Stacy Lewis, So Yeon Ryu of South Korea and Marina Alex.

Martin had two bogeys on her round, but stayed tied for the lead thanks to six birdies. Larsen had one bogey but had six birdies.