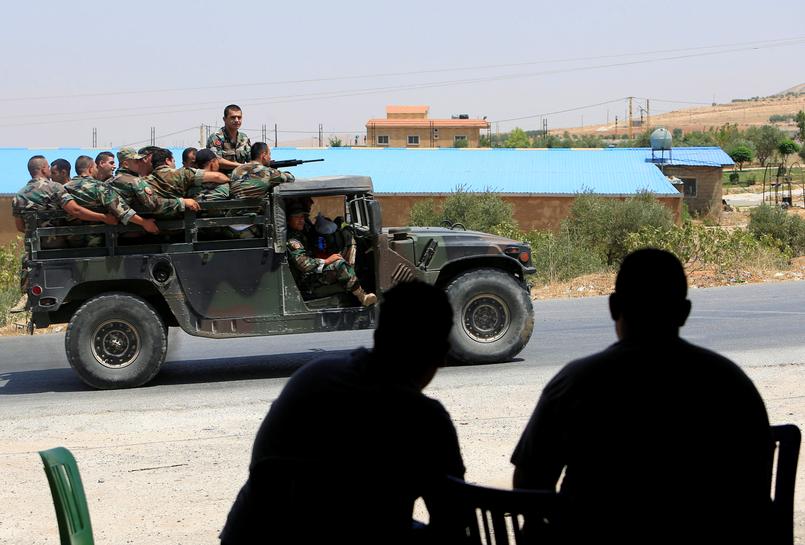 BEIRUT (Reuters) – Lebanon’s Shi’ite militia Hezbollah and the Syrian army advanced against Sunni militants on Saturday, the second day of an assault to drive them from their last foothold along the Syria-Lebanon border, pro-Damascus media reported.

The operation has targeted Sunni Muslim insurgents from the former Nusra Front, a group that was aligned to al Qaeda and who have controlled the barren, mountainous zone of Juroud Arsal.

A military media unit run by Hezbollah said its forces captured a strategic hilltop area called Dhahr al-Huwa, previously a key Nusra Front base, which allowed them to overlook several border crossings in the area.

Forces had earlier seized Jwar al Sheikh, Wadi Kriti and other areas in the southern part of Juroud Arsal, it said.

Hezbollah, which is backed by Iran’s Shi’ite government, has played a critical part in previous campaigns against Sunni insurgents along Lebanon’s border, part of its wider role backing President Bashar al-Assad in the Syrian war.

Hezbollah’s role has drawn criticism from its Lebanese political opponents, including Sunni Prime Minister Saad al-Hariri, who is a Sunni.

The chances of any negotiation with the militants appeared dashed, however, when a mediator and former deputy mayor of Arsal was killed in rocket fire by Nusra fighters, Lebanon’s National News Agency reported.

The rocket hit Ahmed al-Fliti’s his car, killing him and wounding another passenger, it said. Previous negotiations had failed to secure the militants’ withdrawal from the Juroud Arsal area to other rebel-held parts of Syria.

A view of houses in Arsal seen from Labwe, at the entrance of the border town of Arsal, in Bekaa Valley, Lebanon July 22, 2017.Ali Hashisho

Syrian warplanes meanwhile struck militant positions on the Syrian side of the border, near the town of Fleita, it said.

The offensive began on Friday and killed at least 23 Nusra militants on the first day, the Hezbollah unit said. At least five Hezbollah fighters were also killed.

A security source put Hezbollah’s death toll at 15 early on Saturday, and said at least 43 militants had been killed.

The Lebanese army has taken up defensive positions around Arsal town, ready to fire at Sunni militants trying to break through its lines, and has beefed up security in the area.

The Lebanese army is not taking part in the operation, according to a commander in the pro-Damascus military alliance and a Lebanese security source.

The army is facilitating the passage of Syrian refugees fleeing the area, with U.N. supervision, the security source said.

U.N. refugee agency UNHCR and aid groups are preparing for an influx of Syrian refugees from Juroud Arsal and Arsal town. Only a handful of refugees were reported to have fled on Friday.

The Lebanese army and Hezbollah have regularly targeted militants penetrating the border area.

In 2014, Arsal was the scene of one of the most serious spillovers of the Syrian war into Lebanon when jihadists briefly overran the town.