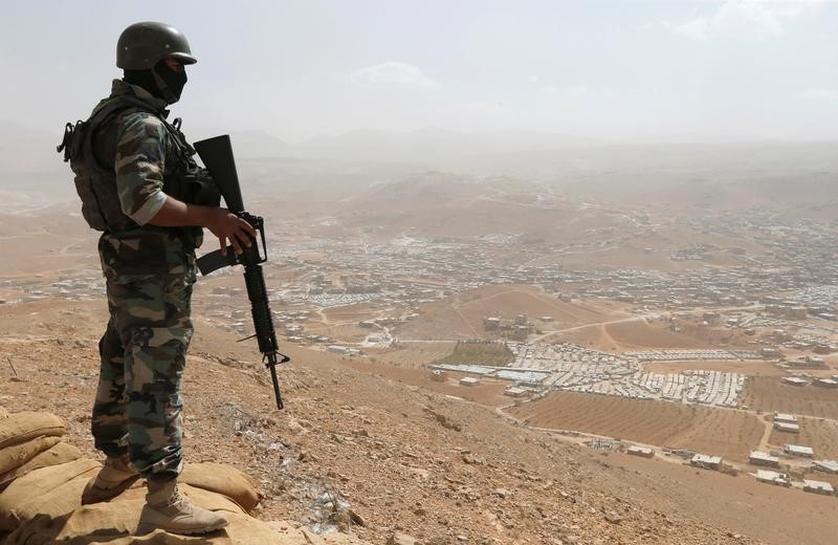 BEIRUT (Reuters) – The Lebanese group Hezbollah and the Syrian army launched an offensive on Friday to clear militants from an area of the Syrian-Lebanese frontier, a commander in the military alliance fighting in support of President Bashar al-Assad said.

The operation is targeting insurgents from the Nusra Front group in the Juroud Arsal area on the outskirts of the Lebanese town of Arsal, and in areas of the western Qalamoun mountains in Syria, the commander told Reuters.

The barren Juroud Arsal area between Syria and Lebanon has also been a base of operations for Islamic State militants. Several thousand Syrian refugees are living in camps in Juroud Arsal.

Hezbollah’s al-Manar TV said Nusra militants were being targeted in Juroud Arsal and in areas near the Syrian town of Fleita. Al-Manar broadcast footage showing an artillery gun being fired from the back of a truck flying the Hezbollah flag. Plumes of smoke were shown rising from the hills.

The Lebanese army has deployed reinforcements on the outskirts of Arsal town in anticipation of the operation, aiming to prevent militants from fleeing into Lebanon, a Lebanese security source said this week.

FILE PHOTO: A Lebanese soldier takes a position at an army post in the hills above the Lebanese town of Arsal, near the border with Syria, Lebanon September 21, 2016.Mohamed Azakir

A Lebanese security source said on Friday the army was in a defensive position. “If our positions are not attacked we will not initiate (fire),” the source said.

The pro-Assad commander said the Lebanese army was not participating in the offensive on Friday.

The Nusra Front was al Qaeda’s official affiliate in the Syrian civil war until last year when it formally severed ties to al Qaeda and renamed itself. The group now spearheads the Tahrir al-Sham Islamist alliance.

Lebanese Prime Minister Saad al-Hariri said on Tuesday the Lebanese army, a recipient of U.S. military support, would carry out a carefully planned operation in the Juroud Arsal area, but there was no coordination between it and the Syrian army.

In 2014, the Arsal area was the scene of one of the most serious spillovers of the Syrian war into Lebanon, when jihadists briefly overran the town of Arsal.

The Iran-backed Shi’ite group Hezbollah has provided Syrian President Assad with crucial military support in the war, a role that has drawn heavy criticism from its Lebanese opponents including Hariri.