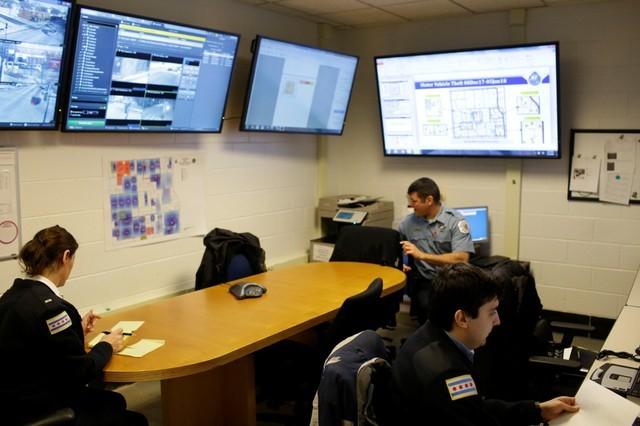 NEW YORK (Reuters) – Gun violence in major U.S. cities fell in 2017 as police used the latest crime-fighting software combined with a revival of old-fashioned community policing to build trust with a skeptical public.

Law enforcement officials and criminologists credit that dual approach with helping extend the decades-long reduction in crime in New York City and reducing gun violence in Chicago by 20 percent in 2017.

Crime has dropped precipitously across the United States since peaking in 1991, though some cities have lagged and others have experienced sudden spikes.

Chicago became a symbol of U.S. gun violence after homicides soared nearly 60 percent in 2016, drawing frequent criticism from Donald Trump during his campaign for the presidency and after he was elected.

Since then, the third-largest U.S. city has revamped policing policies and developed a sophisticated integration of crime-fighting software and hardware such as cameras. It has also built ties to the public through events such as a Halloween party that drew 500 kids to a police station in a high-crime district.

While there is no hard evidence that those initiatives were responsible, homicides in Chicago dropped 16 percent in 2017 to 650. That still outnumbered homicides in the two largest U.S. cities, New York and Los Angeles, combined.

“There was a promise to never relive 2016,” said Anthony Guglielmi, chief communications officer for Chicago police. “That was a moment in time we never want to repeat in terms of violence.”

While Chicago has seen volatile swings, New York has experienced a consistent reduction in crime, in sharp contrast with a bygone reputation as the country’s murder and mayhem capital.

The New York Police Department called 2017 the safest year in nearly seven decades even as arrests decreased by nearly 400 per day from their high point seven years ago.

Experts do not entirely understand the trend but point to a number of likely factors, including CompStat, the computer analysis of crime data that was developed by New York police in 1994 and has since been replicated in other cities.

CompStat gives police daily reports on how they are performing, enabling them to quickly identify trends and deploy officers to trouble spots.

Data-driven, evidence-based policing has advanced further with the help of crime-predicting software like HunchLab and gunfire-detection system ShotSpotter.

The public uproar over police shootings of unarmed black men across the United States in recent years has also convinced police they must adopt neighborhood or community policing.

That aims to improve relationships between police and residents of high-crime districts and reduce animosity toward police to gain more co-operation in solving and preventing crimes.

“Technology is great … but I think the best thing going for us is the ability for the police officers to establish and have relationships with the people in this great city,” New York Police Commissioner James O‘Neill said.

Chicago studied the best practices of the New York and Los Angeles police departments, incorporating much of New York’s neighborhood policing model and the use of predictive crime software by Los Angeles.

In February, Chicago rolled out so-called Strategic Decision Support Centers, which integrate gunfire detection and predictive crime software with the city’s extensive network of cameras. Before year’s end the centers had expanded to six of the city’s 22 districts.The program started in notoriously high crime districts such as Englewood and Harrison, where police said crime fell by 43 percent and 26 percent, respectively, in 2017.

Now, when a trigger is pulled, Chicago police are alerted within 30 seconds by ShotSpotter, and the information is relayed to the smartphones of patrol officers within a minute, Guglielmi said.

Meanwhile, with cameras switched on in the gunshot’s vicinity, the same data is run through the HunchLab system. Police and criminologists from the University of Chicago analyze the data in real time, dispatching updates to patrol officers, Guglielmi said.

Chicago police are now frequently responding to incidents as much as three minutes before witnesses report gunfire to the 911 emergency number, he said.

The Chicago experience appears to be “a promising step forward,” said Max Kapustin of the University of Chicago’s Crime Lab.

“Certainly in the case of Chicago and specifically in the district of Englewood, there’s a lot of suggestive evidence that this led to those reductions and seems like a really meaningful way forward for reducing crime,” Kapustin said.