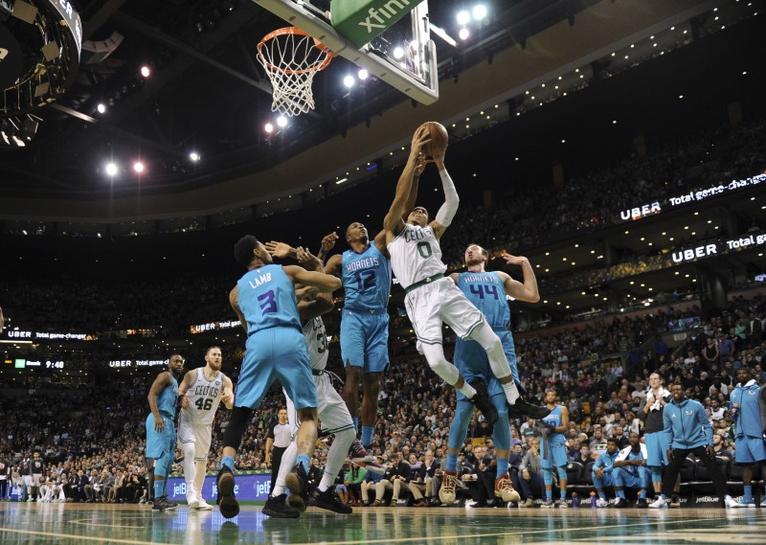 The Boston Celtics lost Kyrie Irving but rallied from 18 points down in the second half and captured their 11th straight victory, roaring past the Charlotte Hornets and hanging on for a 90-87 victory on Friday night.

With Gordon Hayward out for the season and Al Horford sitting out a second straight game with a concussion, Irving, the third member of the new Big Three, went down with a possible concussion less than two minutes into the game — the result of an errant elbow from teammate Aron Baynes.

Boston went on to a season-low 11 points in the first quarter and was down 18 early in the third before sending the Hornets to their fourth straight loss that completed an 0-4 road trip.

With journeyman guard Shane Larkin leading the way, the Celtics went on a 14-2 fourth-quarter run to take control of the game and held the Hornets to 11 points in the fourth quarter. But the home team still had to survive a scramble at the end to survive.

The Pacers never trailed and limited the Bulls to 25.9 percent shooting (7 of 27) from 3-point range. The Pacers had struggled defensively during the four-game skid, allowing an average of 115 points.

Thaddeus Young chipped in 13 points for Indiana (6-7), which won for the first time since Nov. 1. Myles Turner also reached double figures for the Pacers and finished with 11 points and nine rebounds. Bobby Portis, playing his second game since returning from an eight-game suspension, scored 20 points and grabbed 11 rebounds off the bench to lead Chicago, which lost its third straight.

Jackson finished with 22 points and six assists for the Pistons (9-3), who gave away a 19-point lead before regaining control. Andre Drummond had 16 points, 20 rebounds and a career-high seven assists for Detroit. Avery Bradley supplied 20 points and Tobias Harris contributed 16 points and eight rebounds. Ish Smith led Pistons reserves with 17 points and five assists.

Giannis Antetokounmpo had 28 points and 12 rebounds and newly acquired Eric Bledsoe added 13 points and hit a key jumper down the stretch as Milwaukee defeated San Antonio to snap a four-game losing streak.

The Bucks led 87-80 with 6:13 to play on a jumper by Khris Middleton, but Milwaukee missed its next five shots and allowed San Antonio to pull within 89-87 on Manu Ginobili’s 3-point play with 2:26 remaining.

Bledsoe, who was playing his first game with Milwaukee after being traded from Phoenix on Tuesday, made a jumper with 1:40 to play and Middleton added another with 55 seconds left to push the Bucks’ advantage to 93-87. The Spurs missed their final five shots and got no second chances down the stretch.

Lou Williams scored a season-high 35 points to lead the Clippers. Blake Griffin and Austin Rivers added 17 each for Los Angeles, which lost for the fourth straight time and the sixth time in seven games.

Miami won its second straight after holding the Jazz to 4-of-33 shooting (12.1 percent) in the second half. Utah’s shooting struggles helped the Heat overcome 20 turnovers.

Rodney Hood scored 19 points to lead the Jazz. Rudy Gobert chipped in 12 points and 12 rebounds and Donovan Mitchell and Alec Burks each scored 12 points for Utah, which has lost four straight — three at home.

Terrence Ross and Jonathan Simmons added 17 each for the Magic, who are 8-4 and off to their best start since going 9-3 to start the 2011-12 season. The Magic are a perfect 4-0 against the Western Conference.

Alex Len had 21 points and 13 rebounds for Phoenix, TJ Warren had 20 and rookie Josh Jackson had a career-high 18 points for the Suns, who have lost five straight and the first three games of a seven-game homestand. They also lost forward Jared Dudley to a right knee sprain in the third quarter.

Russell five players in double figures for the Nets, who used a 31-18 third quarter to improve to 2-2 on a five-game road trip.

Hong Kong leader Carrie Lam to visit Beijing to discuss plans to revive economy
PCB confirms 187 players accepted 2020-21 domestic contracts
‘I Lived My Life as I’d Said I Would, I Have no Regrets’: Former Xinjiang Independence Activist
Thai PM Prayut vows to carry on despite calls to quit
US Senators Introduce Resolution to Designate China’s Abuses in Xinjiang as ‘Genocide’