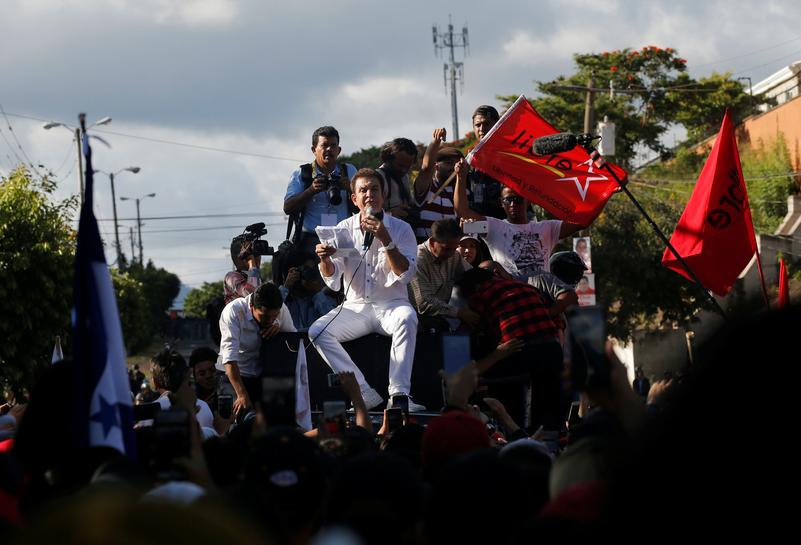 TEGUCIGALPA (Reuters) – Thousands of Hondurans marched on Sunday to back a TV star who says the government is trying to steal last week’s disputed presidential election, which has sparked deadly protests and a military enforced curfew.

Salvador Nasralla, presidential candidate for the Opposition Alliance Against the Dictatorship gives a speech to supporters as he takes part in a protest while the country is still mired in chaos over a contested presidential election in Tegucigalpa, Honduras December 3, 2017. REUTERS/Henry Romero

Hundreds have been arrested in violent protests that have left at least three dead after the tally from last Sunday’s presidential race stalled without a clear winner. Electoral officials prepared to begin a partial recount on Sunday.

Waving blue and white Honduran flags as well as red banners of a left-leaning opposition alliance, throngs of mostly young demonstrators banged pots and blew shrill horns as they marched through the capital in support of Salvador Nasralla.

The former sportscaster and game show host has accused his rival, President Juan Orlando Hernandez, of manipulating the polling results. Local TV images showed similar protests in other major cities around the country.

“Even the nationalists know this was a big fraud. The recount is useless. They know that the president lost,” said Carlos Hernandez, 24, before approaching a group of soldiers along the protest route and yelling at them for supporting the government.

The country’s electoral tribunal on Sunday said it would carry out a partial recount of nearly 6 percent of the vote.

Nasralla has demanded the recount be widened to include thousands more polling stations, but electoral officials have not agreed to expand the review.

The head of the electoral tribunal called on Nasralla’s party to send representatives to oversee the partial recount, but he said that officials would begin the process on Sunday with or without out them.

“The Honduran people deserve a result, and the result cannot be held up by any presidential candidate or any party,” said electoral tribunal president David Matamoros.

Nasralla’s early 5-percentage-point lead on Monday was later reversed, after a pause of more than a day in the count, in favor of Hernandez, leading to accusations of vote fraud and calls for protests. Disputed votes could swing the outcome.

Salvador Nasralla, presidential candidate for the Opposition Alliance Against the Dictatorship, greets his supporters during a protest while the country is still mired in chaos over a contested presidential election in Tegucigalpa, Honduras December 3, 2017. REUTERS/ Jorge Cabrera

Under the official count, Hernandez had 42.9 percent of the vote while Nasralla has 41.4 percent, with 95 percent of votes tallied.

Following violent protests, the government imposed a 6 p.m. to 6 a.m curfew on Friday, expanding powers for the army and police to detain people and break up blockades of roads, bridges and public buildings.

Social media showed Hondurans across the country banging pots and pans in their homes and in the streets at night in protest over the curfew.

U.S. officials and the head of the Organization of America States have called for Hondurans to refrain from violence and let election officials carry out the recount.

The Central American country struggles with violent drug gangs, one of world’s highest murder rates and endemic poverty, driving a tide of Hondurans to migrate to the United States.

“We cannot continue with this president. We are afraid to leave our houses. We want to study and have a future that is not just going to the United States or being killed by gangs,” said Marilyn Cruz, a 27-year old law student, who joined the protests on Sunday.

Hernandez, 49, implemented a military-led crackdown on gang violence after he took office in January 2014 that was backed by the United States. He has been supported by U.S. President Donald Trump’s chief of staff, John Kelly.

The 64-year-old Nasralla is one of Honduras’ best-known faces and he is backed by former President Manuel Zelaya, a leftist ousted in a coup in 2009.

Since late last week, three people, including a 19-year-old woman, have been killed in the demonstrations as soldiers busted up protesters’ blockades of rubble and burning tires, according to a national police spokesman.

There were also reports from opposition leaders and a police source that between four and five more demonstrators had been shot dead in the north of the country on Friday.