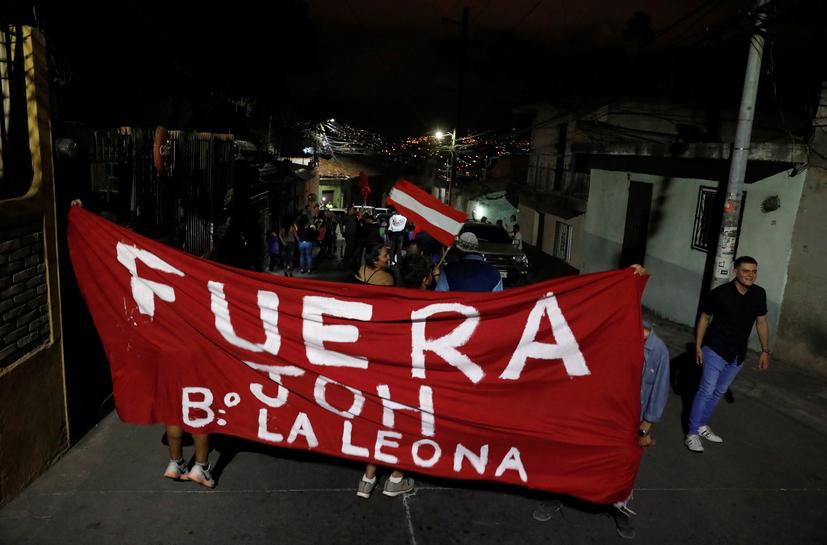 TEGUCIGALPA (Reuters) – The third-placed presidential candidate in last month’s disputed Honduran election said on Wednesday that irregularities in the vote had polluted the results for legislators as well as the presidency, and reiterated that Salvador Nasralla had won the top job.

People hold up a banner at a protest during curfew, while the country is still mired in chaos over a contested presidential election, in Tegucigalpa, Honduras December 5, 2017. The banners reads: ” Out JOH”, a word referring to National Party presidential candidate Juan Orlando Hernandez. REUTERS/Henry Romero

Luis Zelaya, of the Liberal Party, quickly conceded victory to center-left opposition leader Nasralla after the still-unresolved Nov. 26 vote, which has been tarnished by a contentious vote count, allegations of electoral fraud, and street protests.

Official results show President Juan Orlando Hernandez with a narrow 1.6 percentage point lead in the presidential election, but no victor has yet been declared by the election tribunal, and his government is under pressure from the opposition and international election observers to launch a recount.

The results also show Hernandez’s National Party winning the most seats in Congress.

“The irregularities are not only at the presidential level, but also at the legislative and municipal level,” Zelaya said at a press conference in the capital Tegucigalpa.

He did not specify what the alleged irregularities were.

“According to our information, with 82 percent of physical ballot boxes that we’ve counted within the party, Salvador Nasralla wins (the presidential vote),” Zelaya added.

A man beats a pan along a street at a protest during curfew, while the country is still mired in chaos over a contested presidential election, in Tegucigalpa, Honduras December 5, 2017. The banners reads: ” Out JOH”, a word referring to National Party presidential candidate Juan Orlando Hernandez. REUTERS/Henry Romero

He said his party would share its copies of ballot sheets, including those disputed by the opposition, with the Organization of American States (OAS), whose election observers have said results were marked by irregularities and errors.

TV star Nasralla, who claimed victory after early results put him ahead of Hernandez, has been locked in a bitter row over the vote count since the process broke down and suddenly swung in the president’s favor.

The dispute has sparked deadly protests and a night-time curfew in one of the most violent countries in the world.

On Tuesday, Nasralla said the electoral tribunal should review virtually all the ballots. If the tribunal was unwilling to do that, he proposed a run-off between himself and Hernandez, something not allowed for under Honduran law.

Hernandez, who as president has won praise from the United States for his crackdown on violent street gangs, has not claimed victory in broadcast comments in recent days.

On Wednesday, he said he and his party were willing to go along with the opposition’s demands.

“The National Party has all the ballots that support our victory,” he said.