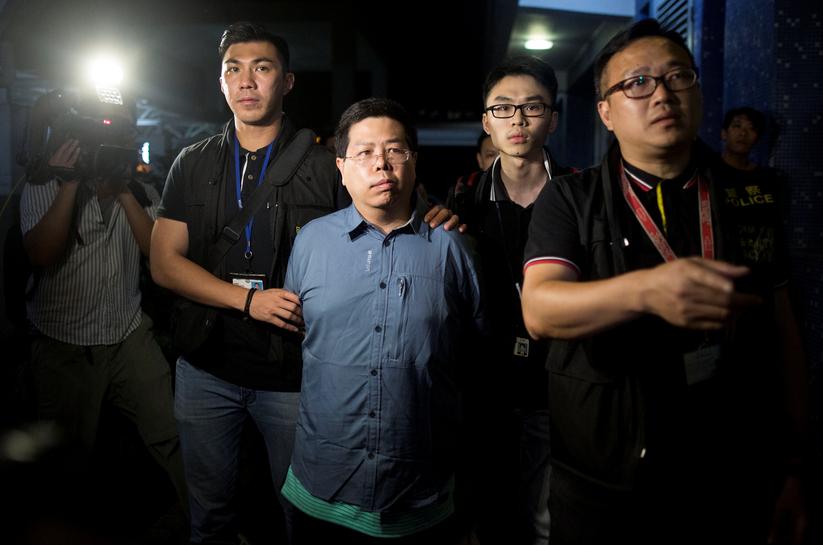 HONG KONG (Reuters) – Hong Kong police have charged a democracy activist with misleading police after claiming he had been abducted and assaulted by mainland Chinese agents.

Howard Lam, a veteran yet low-profile member of the city’s main opposition group, the Democratic Party, held a press conference last week claiming agents from mainland China forced him into a car in the middle of the city, punched metal staples in the shape of crucifixes into his thighs for being “unpatriotic”, and dumped him on a remote beach.

The incident was initially denounced by democracy activists as a shocking breach of Hong Kong’s laws and autonomy by Chinese authorities. Hong Kong, a former British colony, returned to Chinese rule in 1997 amid promises that Beijing grant the city a large degree of autonomy and freedoms under a so-called “one country, two systems” arrangement.

But Lam’s claims were later challenged after CCTV footage obtained by a local news agency, Factwire, showed a masked man with a passing resemblance to Lam walking freely in the district around the time he claimed he had been abducted. Lam has denied the man in the footage was him.

Hong Kong police said in a statement issued late on Wednesday that Lam had now been formally charged with misleading police. Lam had been arrested early on Tuesday.

“The statements made by the person and the information we got from our investigation do not match,” said acting commissioner of police, Lau Yip-shing, in comments carried by Hong Kong’s public broadcaster RTHK.

Lam is under police detention and has been hospitalized since Wednesday night.

Anyone convicted of misleading police by giving false information or making a false report could face six months imprisonment.

For Primary 1 students with behavioural difficulties, MOE programme helps them adjust to new environment
Commentary: As Big Hit searches for the next big thing, are there too many K-pop groups?
ASEAN must reiterate guiding principles when it comes to situation in Myanmar: Vivian Balakrishnan
Hong Kong Activists Still in Court as Supporters Gather Outside
No parliament sittings during state of emergency, says Malaysian law minister