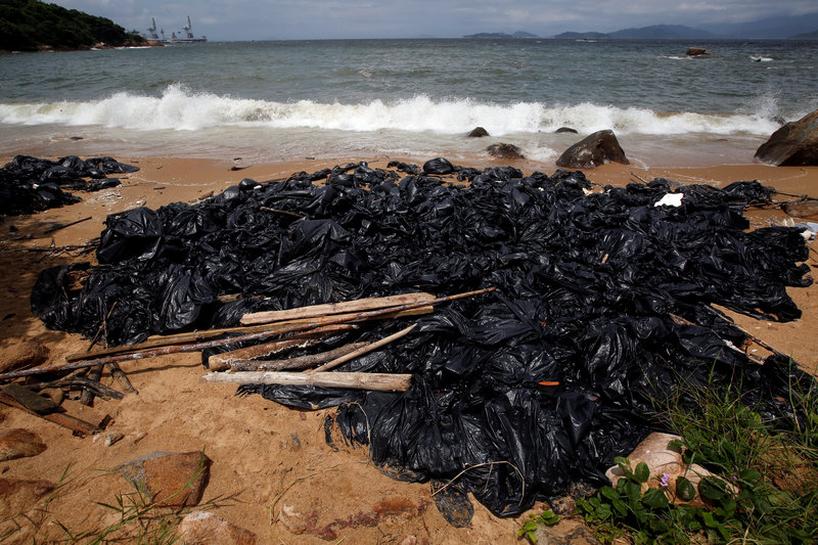 HONG KONG (Reuters) – Hong Kong may reopen some of its 13 beaches closed since last Sunday following a palm oil spill, after authorities collected more than 150 tonnes of acrid-smelling clumps in one of the Chinese territory’s worst environmental disasters.

The spill last week after two vessels collided in the Pearl River estuary left white globs of jelly-like palm oil in the water and strewn across beaches, along with dead fish, rocks, shells and rubbish smothered in the oil.

The government said about 300 staff had been deployed to tackle the oil waste, while scores of volunteers also helped to scoop up the waste into black plastic bags.

The spill sparked outrage among some residents and environmentalists and comes just a year after mountains of rubbish washed up on Hong Kong’s beaches, with labels and packaging indicating most of it had come from mainland China.

The Under Secretary for the Environment Tse Chin-wan said on Thursday the situation was becoming more stable and some of the 13 beaches that have been shut since Sunday may be reopened this weekend.

The spill comes at the peak of summer, when visitors, campers and holiday makers throng to beaches and outlying islands, especially at weekends.

Environment groups have warned the spill could have severe ecological consequences, with Hong Kong’s sweltering summer temperatures raising the threat of a harmful algae bloom that would compete with fish for oxygen.

The government said water samples in affected areas showed oil content remained at low levels, but Tse warned that there might still be traces of the palm oil pellets in the sand.

Hong Kong’s Agriculture, Fisheries and Conservation Department (AFCD) said it was monitoring the impact on the fishing industry and the marine parks.

The effect on marine life, which includes the endangered Chinese white dolphins – also known as pink dolphins – and green turtles was not immediately clear.

Hong Kong’s coastal waters and beaches are often strewn with rubbish from mainland China, where some companies discharge waste into the sea to cut costs, conservationists say.