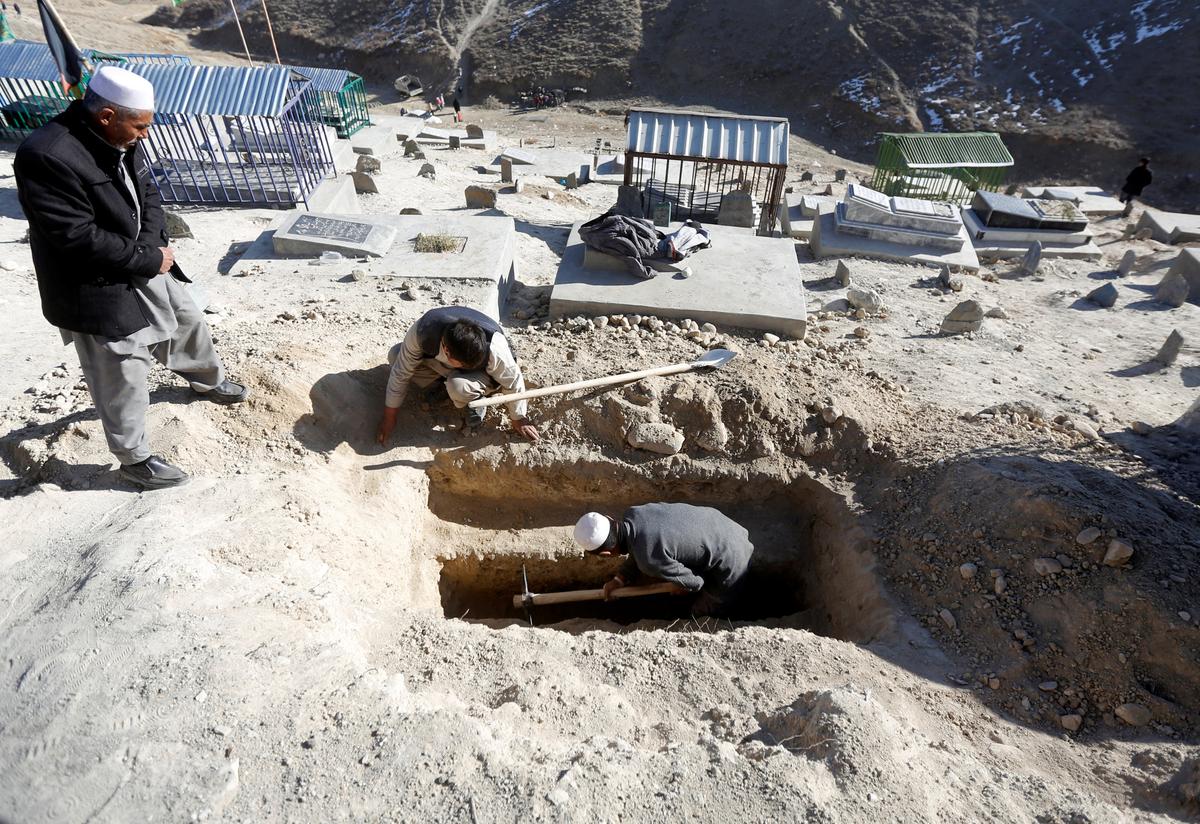 KABUL (Reuters) – Hours after the explosion that tore through a Shi‘ite cultural center in the Afghan capital Kabul on Thursday, desperate families were still searching for news, as burned bodies were brought in and wards at the nearby Istiqlal hospital filled up.

The explosion that tore through a cramped basement conference room killed at least 41 people and wounded more than 80 and there were hours of confusion as victims were rushed to nearby hospitals.

“Everyone was at the hospital but at first nobody knew where they were, they were lost,” said Hasan Jan, whose nephews, Abdul Saboor Maqsoudi, 24, was among the dead, along with his younger brother, Ali Paiman, 18.

“We couldn’t recognize him he was so burned and disfigured by smoke. We had to go back to the morgue three or four times,” he said after the two brothers were buried side by side in the Karte Sakhi cemetery in western Kabul.

“Finally they recognized him because of a ring on his finger and his shirt and belt and his watch.”

The attack, claimed by Islamic State, was the latest in at least two dozen bombings on Shi‘ite targets in the Sunni-majority country over the past two years in a brutal campaign by the movement that has killed and wounded hundreds. According to some witnesses, the bomber in Thursday’s attack was a 10-year-old boy.

At the Tabian Social and Cultural Centre, in a large house down a lane in a mainly Shi‘ite area of the city which also houses the Afghan Voice news agency, the windows are shattered and the floor is still stained with blood.

Heaped neatly in the courtyard, stands a pile of shoes belonging to victims, all that remains of the dead, many of them students attending a conference.

“They were just there for this discussion,” Hasan Jan said of his two nephews. “They wanted to learn about culture, the Quran and religion.”

A relative morns on the grave of one of the victims, who was killed during yesterday’s suicide attack at Shi’ite cultural centre in Kabul, Afghanistan December 29, 2017. REUTERS/Omar Sobhani

In many ways, the short lives of the two brothers and the way they ended are emblematic of the lack of hope that has driven thousands of Afghans of their age to leave their country and try for a better life in Europe.

Abdul Saboor had studied civil engineering but like many young Afghans, he struggled to find work after graduation and had taken a job teaching English. His father died five years ago in another suicide attack and now that he and his brother are gone, his mother and sister are alone.

“He was the breadwinner,” Hasan Jan said. “Now the family has no support, there’s no man in the family.”

Although the government of President Ashraf Ghani and its NATO allies have claimed some success against Taliban insurgents since the United States announced a more robust military strategy this year, high-profile attacks in the cities have continued.

The government itself is chronically divided, often appearing more concerned with personal rivalries between its leaders and maneuvering ahead of presidential elections in 2019 than in confronting Afghanistan’s many problems.

Asked what more the government could be doing to ensure security and stability, Hasan Jan was scornful.

“We’ve lost our way. What government is going to provide help? There is nothing. All we want is security forces for our country.”

But he was equally dismissive of the militants who carried out the attack, which Islamic State said was ordered because of what it said were the cultural center’s links to Iran.

“These people are innocent. People haven’t taken up arms. People being killed in mosques, in different places. No human could accept that. If they had even a small bit of humanity in them, they couldn’t accept that.”

Mainland China reports 16 new COVID-19 cases vs 17 a day earlier
South Korea to close bars, restrict restaurants and churches amid COVID-19 spike
Commentary: Is it too late for the US to join the CPTPP?
Airbus’ new campus in Seletar a ‘statement of confidence in Singapore’ amid COVID-19 pandemic
Carrie Lam Targets Hong Kong’s Youth With Changes to Education, Job Scheme