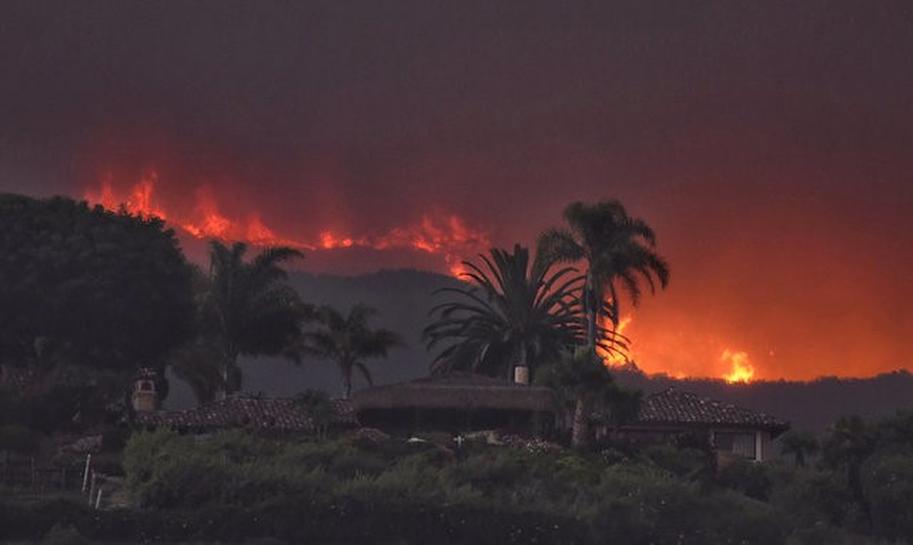 LOS ANGELES (Reuters) – Firefighters battled on Saturday to gain control of a destructive wildfire burning near Santa Barbara, California that mushroomed in size overnight, pushed by gusty offshore winds into dry brush that has not burned in decades.

The Whittier Fire, which broke out July 8 and has already destroyed eight homes, had been more than 50 percent contained on Friday before so-called “Sundowner” winds picked up in the evening, according to a California Department of Forestry and Fire Protection (Cal Fire) website.

Nearly 3,000 people who were forced to flee their homes near Cachuma Lake and the community of Goleta remained under evacuation orders as fire officials said another evening of Sundowners could drive the flames toward populated areas.

More than 1,600 firefighters were working the blaze, assisted by water-dropping planes and helicopters. Highway 154 was shut down in both directions and the Los Padres National Park was closed to the public. Evacuation shelters were opened at a high school in Goleta.

The conflagration, which had blackened 17,364 acres along California’s scenic central coast as of Saturday afternoon, was being fed by brush and vegetation that had not burned since 1955, according to fire officials.

“The combination of old, dry fuels with a newly cured heavy grass crop contributed to the rapid growth of this fire,” Cal Fire said. “Large, old oak trees are continuing to burn well after the fire has past, leaving hazardous snags along highways and firelines.”

The Whittier Fire is among more than 50 large, active wildfires burning across the U.S. West as forecasters warned that hot, dry conditions could persist, creating tinderbox conditions.

Red flag warnings were issued for Northern California and parts of other states, where the National Weather Service said temperatures could reach above 90 degrees Fahrenheit 32 degrees Celsius) and winds to gust 50 miles (80 km) per hour.

Flames have charred more than twice as much land in California so far in 2017 compared with a year earlier, according to Cal Fire.

Still, firefighters have made significant gains against the so-called Wall Fire, which had damaged or destroyed 44 homes in Butte County and more than 60 other structures, calling it mostly contained as of Saturday.

The Alamo Fire, which charred some 29,000 acres and destroyed at least one home in San Luis Obispo County, was said to be 92 percent contained as of Saturday morning.