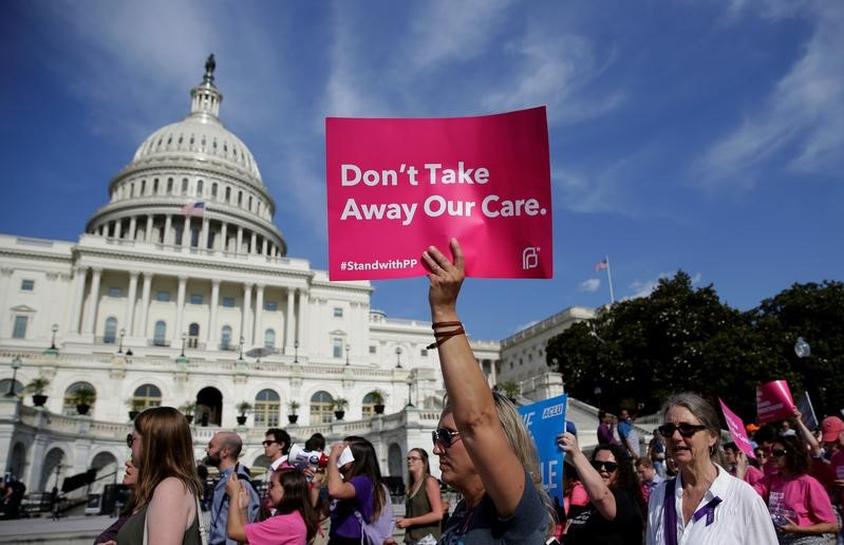 NEW YORK (Reuters) – With Republican efforts to dismantle Obamacare in disarray, hundreds of U.S. counties are at risk of losing access to private health coverage in 2018 as insurers consider pulling out of those markets in the coming months.

In response, Republican President Donald Trump on Friday again suggested that his administration would let the Obamacare program “implode.” He has weakened enforcement of the law’s requirement for individuals to buy insurance, threatened to cut off funding and sought to change plan benefits through regulations.

Anthem Inc, Cigna Corp, Health Care Service Corp and Molina Healthcare, four of the biggest health insurers selling Obamacare plans, said they are weighing whether to pull out of more markets for 2018 rather than face financial losses. They have until Sept. 27 to finalize their plans.

So far, 40 U.S. counties are expected to have no insurer offering individual coverage next year, but that number could rise by the hundreds, according to U.S. government data, Kaiser Family Foundation analysis and insurer disclosures. More than 1,300 counties, primarily in 15 states, currently have only one insurer participating in 2018. Anthem and HCSC are the last man standing in one-third of those counties and states – putting those areas in particular at risk.

“Right now the number of counties at immediate risk of having no insurers in 2018 is small, but it could easily grow significantly if a couple major insurers decide to exit,” Larry Levitt, health economist at the Kaiser Family Foundation, said.

Many insurers have been waiting for an answer from Trump or lawmakers on whether they will continue to fund $8 billion in annual government subsidies. Without assurances, many insurers plan to raise rates an additional 20 percent by an Aug. 16 deadline for premium prices. Others say that the many unknowns will make the business too risky.

The last-minute drama has left millions of Americans questioning whether they will have medical coverage next year.

Julie Grady, a 59-year-old small business owner in Carson City, Nevada, is currently covered by Blue Cross Blue Shield of Nevada, part of Anthem, which has already decided to leave the exchanges in her county and most of the state. Carson City will have no insurer on the exchanges next year.

Grady’s pays a reduced premium of $70 per month and a deductible under $1,000 for her plan, which is part of the Affordable Care Act, commonly called Obamacare. Grady is looking at being uninsured, as she was before the law.

“I would have to go without health insurance,” she said. “I would just stay healthy, hike, eat well. I’d be in trouble if something catastrophic happened. I would lose everything.”

Anthem, the second-largest U.S. health insurer, sells Blue Cross Blue Shield plans in 14 states. It has already decided to pull out of most individual markets in Nevada, Ohio, Indiana and Wisconsin in 2018. Earlier this week, Chief Executive Officer Joe Swedish said he was still weighing 2018 participation in its other states.

In states like Colorado, Georgia, Kentucky, Missouri, and Virginia, Anthem sells plans in more than 250 counties where it is the only insurer, and they could be left “bare” next year, according to government data.

Health Care Services Corp is a Blue Cross Blue Shield licensee in five states and is the only Obamacare individual insurer in more than 90 Texas counties, more than 75 Oklahoma counties, and half a dozen Illinois counties. It confirmed on Friday that it has submitted products for its five states but is still weighing next year.

“We’re working through the regulatory filing process and hope to fully participate…in 2018, however no final decisions have been made,” HCSC spokeswoman Kristen Cunningham said.

Molina, which has more than 1 million members in Obamacare plans, and Cigna, with more than 250,000 participants, have said they need more certainty from the government to decide on 2018 participation and would weigh their decisions up until the late September deadline.

State insurance regulators have worked hard in recent months to replace insurers who have left. In Nevada, for instance, Centene Corp and Aetna Inc entered in some counties that Anthem left after the insurance commissioner said he would favor these insurers for its Medicaid contract bids.

But they are unlikely to find replacements for new dropouts in these final weeks, particularly if the Trump administration signals it won’t fund $8 billion in subsidies for out-of-pocket medical costs.

“There is almost no chance they would step in to participate,” said Kurt Wrobel, a fellow at the Society of Actuaries and chief financial officer of the Geisinger Health Plan in Pennsylvania.

Some insurers say they will likely just raise rates and hope it works. Blue Cross Blue Shield of Michigan filed two sets of rates with the state department of insurance, one up to 32 percent higher if the fate of subsidies remains unclear.

“We don’t have any plans to pull out,” said Rick Notter, director of the individual business at BCBS Michigan. “But it would certainly help to have more certainty around what the market holds.”