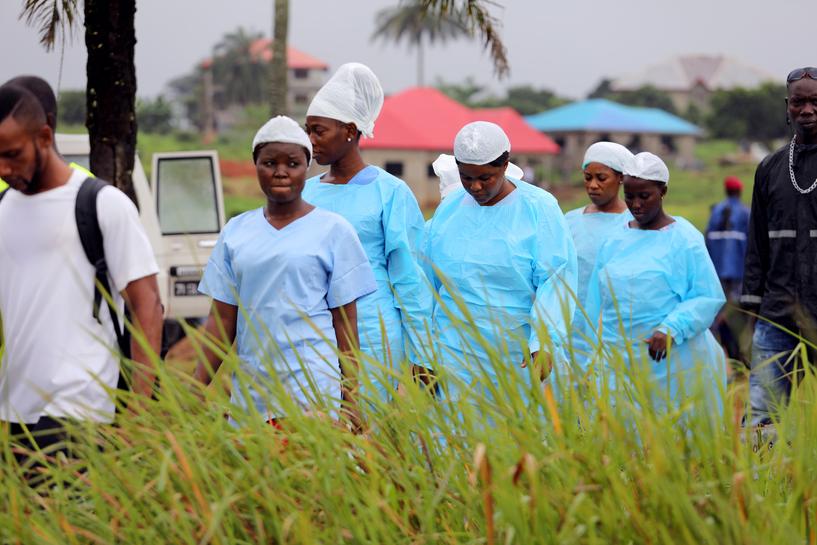 Soldiers and volunteers with shovels and pickaxes dug through the perilous site of a mudslide in Sierra Leone on Thursday in search of hundreds of bodies believed still buried days after the disaster.

Approximately 600 people are missing after a torrent of mud on Monday swept away homes on the edge of the capital, Freetown, the Red Cross said, in one of Africa’s worst flood disasters in living memory. Around 400 bodies have been found.

Aid agencies warned that corpses trapped in the mud are likely to contaminate water sources and cause outbreaks of disease, but continuous rain has made the search difficult and dangerous.

“The topography of this area is not easily accessible, but as military we continue to make headway,” said colonel Abu Bakarr Bah, who is leading a search team near the town of Regent, where part of a mountainside collapsed.

Local construction companies have loaned excavators but many volunteers are digging with household tools and whatever else they can find, said Red Cross spokesman Abu Bakarr Tarawallie.

“We fear there are no more survivors,” he said. “All yesterday no one living was found.”

The government was preparing to bury 300 bodies on Thursday, said government spokesman Cornelius Deveaux. A mass burial of 150 took place earlier this week, said the U.N. Office for the Coordination of Humanitarian Affairs.

Families were summoned to the central morgue on Wednesday to identify relatives, but many were unable to and officials were forced to proceed with the burial because the corpses were decomposing in the heat.

They will be buried at a cemetery outside Freetown that was used during the 2014-16 Ebola outbreak, which killed 4,000 people in the former British colony.

Forty people were killed in another landslide on Thursday in a fishing village in eastern Democratic Republic of Congo, said Pacifique Keta, the vice governor of Ituri province, adding that a search was under way for bodies buried in mud.

The exact cause of the disaster about 80 km (50 miles) from the city of Bunia was unclear, but seismic and volcanic activity have caused a number of landslides in the region in recent years.

Mudslides and floods are fairly common in rainy parts of Africa, and deforestation and poor town planning often contribute to the risk.

Amnesty International said the Freetown disaster was in part due to government housing policies that had left hundreds living in informal settlements in flood-prone areas.

“While flooding is a natural disaster, the scale of the human tragedy in Freetown is, sadly, very much man-made,” said Makmid Kamara, the rights group’s deputy director of global issues.