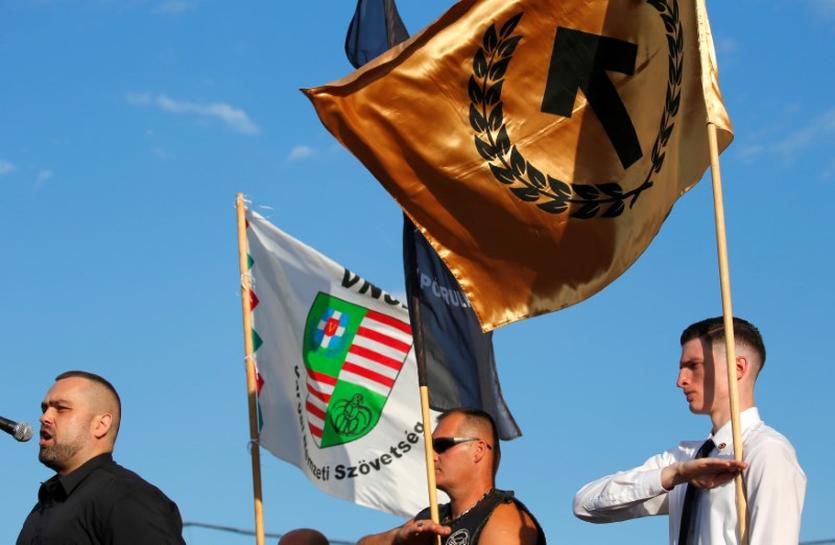 VECSES, Hungary Hundreds of Hungarian right-wing militants gathered in a Budapest suburb on Saturday to launch a new political movement they hope will run in next year’s parliamentary elections on a ticket that includes open racism.

Hungary’s main opposition party, Jobbik, has been moving away from its far-right roots and is staking out a more centrist position. This has created space for new hard-right initiatives.

Three groups held a rally in the suburb of Vecses labelled “unfurling the flag of the far right”. Although attendance was limited its leaders have reached a national audience in the media and plan to take part in the 2018 elections.

The movement, to be called Force and Determination, looks to be more radical than any political organization targeting a serious political role since the fall of Communism, and uses openly racist language to oppose liberalism and immigration.

Balazs Laszlo, one of the movement’s leaders, told the crowd of mostly black-clad muscular, tattooed men that Europe showed an ill-conceived tolerance in the face of peril from its existing minorities and the influx of millions more people.

“Tens of millions are added to the ranks of the Arabs, Africans and Gypsies who will show no tolerance once they realize the power that their demographic significance lends them,” he said. “Our ethnic community must come first… there is no equality.”

Zsolt Tyirityan, another leader of the movement, used the Nazi ideology of Lebensraum, or living space, to paint a stark picture of Europe’s present.

“World history is made and lost on population, the fight for living space and the fight to hold on to living space,” he said. “Anyone who says different is either delusional or lying. Any way you look at it, the strongest always wins.”

He added: “I have race awareness. I am proud to be a white European… And I reserve the right to defend that.”

“We declare war on liberalism. They are our main enemy and we will do everything to destroy their ideals in our public… These people lose their nationality, their race awareness and soon their sexual identity. Such people must be forced out of our living space.”

After Tyirityan spoke, a supporter approached him to sign a new copy of Adolf Hitler’s book Mein Kampf.