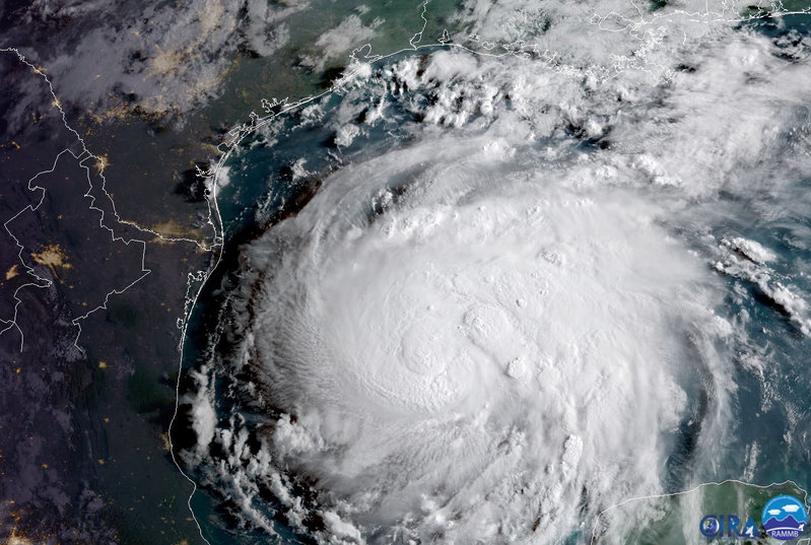 SAN ANTONIO (Reuters) – A Gulf of Mexico storm rapidly intensified on Thursday spinning into the potentially biggest hurricane to hit the mainland United States in 12 years and taking aim at the heart of nation’s oil refining industry.

Hurricane Harvey is forecast to make landfall late Friday or early Saturday, packing winds of up to 125 miles per hour (201 km per hour). The storm could bring a surge in sea levels as high as 12 feet (3.7 meters) and dump up to 35 inches (97 cm) of rain over parts of Texas. Flood warnings are also in effect for northern Mexico and Louisiana.

The threat has triggered evacuations and canceled the first day of school in communities along the south Texas coast, which is home to 5.8 million people from Corpus Christi to Galveston.

Harvey is forecast to come ashore as a Category 3 hurricane, the U.S. National Hurricane Center said, the third most powerful on the Saffir-Simpson scale, which would make it the first major hurricane to hit the mainland United States since Hurricane Wilma struck Florida in 2005.

Louisiana and Texas issued disaster declarations, authorizing the use of state resources to prepare for the storm. The NHC expects Harvey to move slowly over Texas and linger over the state for days, dumping as much 35 inches (97 cm) of rain on some areas. Louisiana could see 10 to 15 inches of rain.

“With this system’s intensity and slow motion, it is the worst of both worlds,” said John Tharp, a forecaster with Weather Decision Technologies in Norman, Oklahoma. “There will be major impacts along the coast and inland with periods of prolonged rain.”

Harvey will bring rains and a storm surge that will bring “life-threatening and devastating flooding” to parts of the Texas coast, the NHC said in an advisory.

President Donald Trump has been briefed on the storm and stands ready to provide resources if needed, the White House said on Thursday.

Houston, the nation’s fourth most populous city, warned residents of flooding from close to 20 inches of rain over several days.

“I hope people will listen to forecasters when they say ‘beware of flash floods,'” Corpus Christi Mayor Joe McComb told residents of the Texas city nearest to expected landfall. “Flash floods can come quickly, and they can be deadly.”

Hurricane Harvey is seen in the Texas Gulf Coast, U.S., in this NOAA GOES satellite image on August 24, 2017. NOAA/Handout via Reuters

The NHC expects the storm to come ashore along the central Texas coast, an area that includes Corpus Christi and Houston, home to some of the biggest refineries in the country.

More than 45 percent of the country’s refining capacity is along the U.S. Gulf Coast, and nearly a fifth of the nation’s crude oil is produced offshore in the region. Ports from Corpus Christi to Texas City, Texas, were closed to incoming vessels.

Harvey has already disrupted U.S. oil supplies in the region.

Three refineries in Corpus Christi and one farther inland at Three Rivers were shutting down ahead of the storm. Concern that Harvey could cause shortages in fuel supply drove benchmark gasoline prices to a three-week high.

One other refinery reduced output and others were considering shutting.

Prices for gasoline in spot physical markets on the Gulf Coast rose even more, hitting a one-year high.

Profit margins for refineries producing gasoline rose by over 12 percent, on course for their biggest daily percentage gain in six months, according to Reuters data.

The four refineries shutting down have combined capacity to refine more than 840,000 barrels per day of crude.

Around 167,000 barrels per day, or 9.6 percent, of crude output capacity in the Gulf was shut, the U.S. government said. Natural gas production of 472 million cubic meters per day, or 14.6 percent of output, also was halted, the U.S. reported.

The storm could also bring flooding to inland shale oil fields in southern Texas that produce more than one million barrels of oil a day.

EOG Resources Inc on Thursday said it has curtailed drilling and shut in some production in the Eagle Ford shale region. Noble Energy Inc and Statoil ASA also said it was evacuating some staff from production facilities in the region.