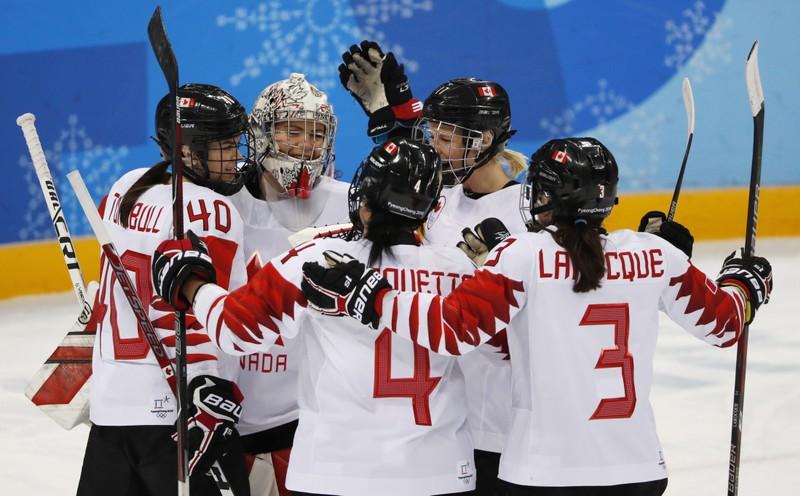 GANGNEUNG, South Korea (Reuters) – Canada thumped the Olympic Athletes from Russia 5-0 on Monday to book their spot in the Olympic women’s ice hockey final and renew one of the Winter Games’s greatest rivalries.

Canada have played for gold at every Winter Games since women’s hockey became part of the Olympic program in 1998 and for the fifth time in six Winter Games will face off against the United States.

“We have something special here and we’re ready our coaching staff has prepared us as best they can and we just need to go out and just play,” Canada forward Meghan Agosta told reporters.

“This is something we have worked hard for all year and it comes down to one game and it is going to be the better team that comes out on top and there is no doubt in my mind that we are going to be ready for whatever it takes.”

The U.S. set the stage for a rematch when they shutout Finland 5-0 to reach the final for the third consecutive Olympics.

Although the U.S. and Canada have met on every final expect at the 2006 Turin Olympics, the Americans have not had gold hung around their necks since the Nagano Games with the Canadians occupying top spot on the podium ever since.

On a day when International Ice Hockey Federation President Rene Fasel announced the Olympic tournament at the 2022 Beijing Winter Games would expand from eight to 10 teams, Canada and U.S. continued to show they remain a class apart.

Canada wasted no time getting on the scoreboard as they connected on their first shot, Natalie Spooner digging the puck out of the corner and feeding an unmarked Jennifer Wakefield, who slammed it past Valeria Tarakanova 1:50 into the opening period.

The defending champions dominated large stretches of play put could not put another puck by Tarakanova until Marie-Philip Poulin beat the OAR netminder with a neat backhand five minutes into the second.

After two gritty periods the OAR finally succumbed to Canadian pressure in the third when Wakefield collected her second of night and Emily Clark added another 31 seconds later, chasing Tarakanova from the game in favor of Nadezhda Alexandrova.

“We have the rivalry, it’s well-documented and we’re just looking forward to the opportunity to bring home another gold.”

Rebecca Johnston closed out the scoring by banging home a loose puck from a scramble in front of the Russian net.

Shannon Szabados was not overworked but turned in a rock- solid effort in the Canadian net, making 14 saves for the shutout.