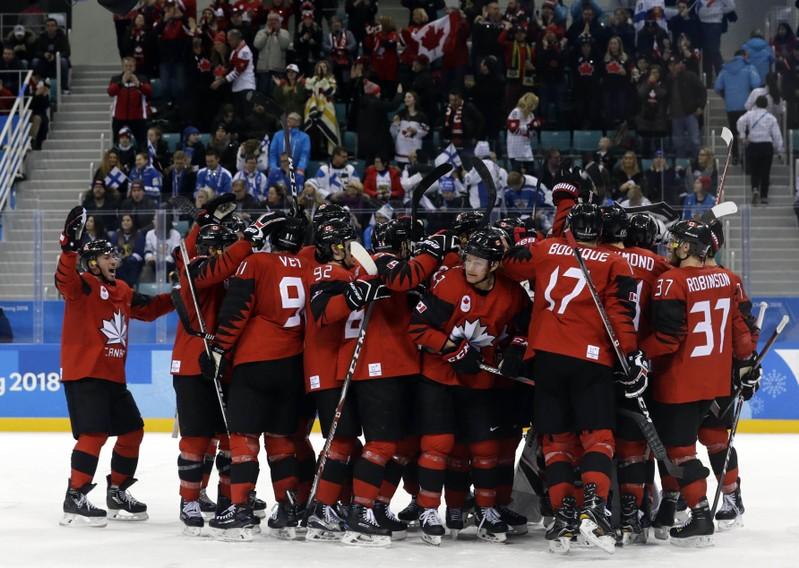 GANGNEUNG, South Korea (Reuters) – Maxim Noreau scored the only goal as Canada beat Finland 1-0 on Wednesday to win a spot in the semi-final round of the Olympic men’s ice hockey tournament.

For Canada, defending gold medalists, it is their third straight appearance in the Olympic semi-finals and sets up a match on Friday against Germany, surprise winners over top-seeded Sweden in overtime.

It was a scoreless tie until early in the third period when Eric O‘Dell won a face off in the Finland zone and got the puck back to Noreau who blasted a slap shot past Finland’s Mikko Koskinen into the upper left corner of the net.

“I got the face off there and I knew we were trying to set up Maxie, and we know what kind of shot he has and it was in the back of the net when he got it,” O‘Dell said. “That was huge for our team, and I think that got us going a bit.”

For Noreau, it was redemption of sorts after his effort in the penalty-shot round in Canada’s loss to the Czech Republic last Saturday hit the goal post, securing victory for the Czechs.

Canada had to change goaltenders early in the second period when starter Ben Scrivens was injured following a collision with Finland’s Veli-Matti Savinainen, who was checked on top of him by O‘Dell. Kevin Poulin replaced him and preserved the shutout.

“I just took him (Savinainen) out of the play and he landed awkwardly on Scrivey,” O‘Dell said. “It was obviously a tough break for our team, but Poulin came in and held his own. He played great for us.”

“You don’t want your team mate to get hurt, but you’ve got to anticipate,” Poulin said. “I came in not expecting to play, but at the same time I’ve got to be ready to.”

Several Canadian players were surprised by news that Germany had taken out Sweden, but they said it would not change how they prepare for the next game.

“We’re ready for any team, and every team from here going forward is going to be tough,” forward Derek Roy said.