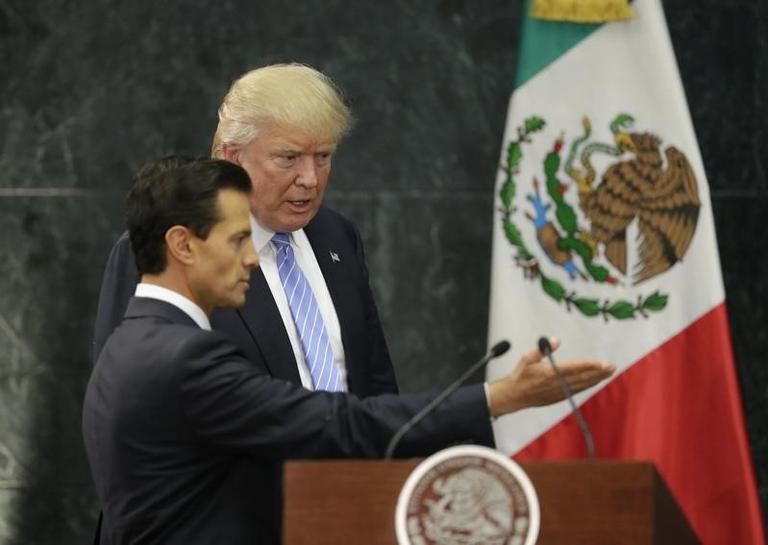 WASHINGTON (Reuters) – President Donald Trump pressured the Mexican president to stop voicing opposition in public to his plan to have Mexico pay for a border wall, according to transcripts of phone calls published on Thursday that gave an insight into Trump’s attempts to influence foreign leaders in his first days in office.

The substance of the calls has previously been reported but the lengthy transcripts reveal Trump, whose first elected office is the presidency, trying to use a mixture of bluster, tough talk and charm as he fully enters the world of diplomacy.

Trump argued with Turnbull over refugees in an acrimonious call on Jan. 28 which the new U.S. president told his counterpart was “unpleasant.”

In a Jan. 27 call, Trump pressed Pena Nieto to avoid saying in public that Mexico would not fund the planned border wall. But he complimented the Mexican leader’s “beautiful words” and said he hoped Mexico would change its constitution to allow Pena Nieto to extend his stay in office.

The proposed wall, aimed at preventing illegal immigration to the United States, is a bone of contention between Mexico and Washington. Pena Nieto has repeatedly rejected Trump’s promise that Mexico will end up paying billions of dollars for its construction.

‘You Cannot Say That’

Trump told the Mexican leader in the call that “if you are going to say that Mexico is not going to pay for the wall, then I do not want to meet with you guys anymore because I cannot live with that,” according to the transcript.

“You cannot say that to the press,” Trump said.

Pena Nieto had earlier scrapped a plan to hold talks with Trump in the United States due to tensions over the wall and trade. The two men have since met, holding talks at a summit of the Group of 20 nations in Germany last month.

The White House has said the U.S. government will pay for the wall initially to get the project off the ground but that Mexico will eventually reimburse it for the work.

Both the White House and Mexico’s foreign ministry did not have any immediate comment on Thursday about the release of the call transcripts.

It was the latest in a series of leaks from inside Trump’s administration which have angered the president. The Republican won some sympathy over leaks from a political opponent on Thursday.

“I am alarmed at leaks of conversations between two heads of state,” Democratic U.S. Senator Brian Schatz wrote on Twitter. “It doesn’t matter what I think of this president, this is terrible.”

In the conversation with Pena Nieto, Trump said both leaders were “in a little bit of a political bind” due to Trump’s campaign pledge to build the wall and have Mexico foot the bill.

“I have to have Mexico pay for the wall – I have to. I have been talking about it for a two-year period,” Trump said.

He suggested that the two men avoid the issue of paying for the wall when asked.

Pena Nieto said he understood Trump’s position on how to refer to paying for the border wall and suggested seeking “a creative way to jump over this obstacle.”

Toward the end of their conversation, Trump responded effusively to a comment by Pena Nieto about the Mexican leader’s wish for a constructive relationship with the United States.

“Your words are so beautiful. Those are beautiful words and I do not think I can speak that beautifully, okay?” Trump said.

“I want you to be so popular that your people will call for a constitutional amendment in Mexico so that you can run again for another six years,” he said. By law, Mexican presidents can only serve one six-year term.

In comments likely to upset voters in New Hampshire – an important early voting state in the U.S. presidential election primaries – Trump described the state as “a drug-infested den.”

“I won New Hampshire because New Hampshire is a drug-infested den,” he said, complaining that drugs from Mexico are damaging the United States. While Trump won the Republican primary there, he narrowly lost the state to Democratic rival Hillary Clinton in the general election.

New Hampshire officials from both parties lashed out at Trump, with several saying his push to repeal the Obamacare healthcare law would worsen the nation’s opioid crisis.

Speaking to Australia’s Turnbull, Trump became irritated that the United States was expected to honor an agreement made by his Democratic predecessor, Barack Obama, to accept as many as 1,250 refugees held in Australian processing centers on remote Pacific islands.

Trump said that would make him look bad given his campaign promises to reduce the number of refugees entering the United States, according to the transcript.

“This is going to kill me. I am the world’s greatest person that does not want to let people into the country,” Trump said.

Seeking to win Trump’s support, Turnbull on Friday said Washington could honor the deal while taking as few as 100 refugees from the two offshore centers, should the rest fail to satisfy its vetting.

“It has always been subject to American vetting procedures,” Turnbull told reporters in Western Australia state. “Those procedures from the Department of Homeland Security are ongoing.”

The dialogue was a “frank conversation between adults”, he added.

Trump told Turnbull that their conversation was the most difficult he had held that day, after speaking to Russian President Vladimir Putin and others.

“I have had it. I have been making these calls all day and this is the most unpleasant call all day,” Trump said. “Putin was a pleasant call. This is ridiculous.”