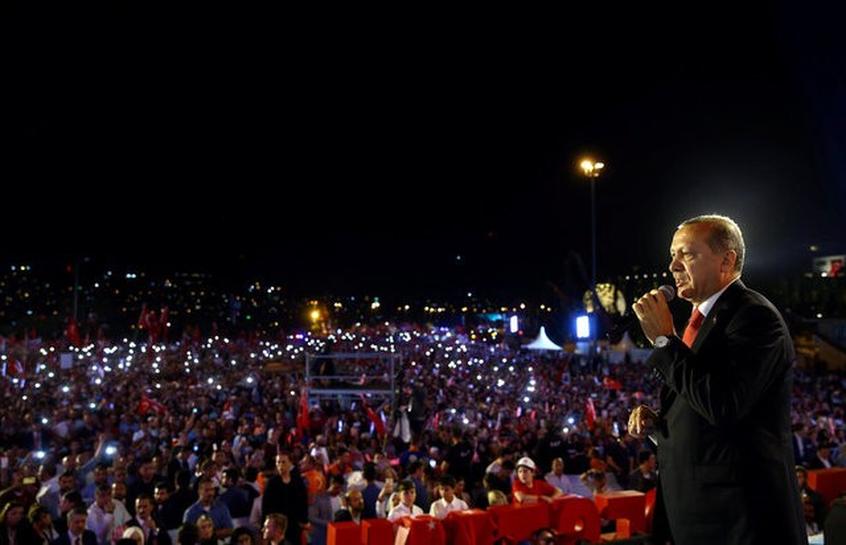 ANKARA/ISTANBUL (Reuters) – Hundreds of thousands of Turks rallied to mark the anniversary of last year’s failed coup on Saturday, in an outpouring of mass support for President Tayyip Erdogan that lay bare the divisions of a society riven by widespread purges.

A sea of rapturous, flag-waving crowds gathered in Istanbul to listen as a defiant Erdogan promised to punish his enemies and praised the unarmed civilians who last year stood up to the rogue soldiers and their tanks.

“They showed no mercy when they pointed their guns at my people,” Erdogan said. “What did my people have? They had their flags – just as they do today – and something much more important: They had their faith.”

Some 250 people were killed and parliament was bombed before the coup was put down. The show of popular defiance has likely ended decades of military interference in Turkish politics.

But along with a groundswell of nationalism, the coup’s greatest legacy has been a far-reaching crackdown that has deepened the divide between Western-facing, secular Turks and the pious millions who back Erdogan’s Islamist-rooted politics.

Some 150,000 people have been sacked or suspended from jobs in the civil service and private sector and more than 50,000 detained for alleged links to the putsch. On Friday, the government said it had dismissed 7,000 more police, civil servants and academics for suspected links to the Muslim cleric it blames for the attempted coup.

“Nobody who betrays this nation can remain unpunished,” Erdogan said, promising again to restore the death penalty if parliament votes to bring it back – a move that would all but end Turkey’s bid to join the European Union.

Critics, including rights groups and some Western governments, say that Erdogan is using the state of emergency introduced after the coup to target opposition figures including rights activists, pro-Kurdish politicians and journalists.

The two co-leaders of the pro-Kurdish Peoples’ Democratic Party (HDP) are in jail – as are local members of rights group Amnesty International and nearly 160 journalists, according to the Committee to Protect Journalists.

At a parliamentary ceremony in Ankara on Saturday, the head of the main opposition Republican People’s Party (CHP) decried what he said was the erosion of democracy following the coup.

Turkish President Tayyip Erdogan addresses his supporters during a ceremony marking the first anniversary of the attempted coup at the Bosphorus Bridge in Istanbul, Turkey July 15, 2017. Kayhan Ozer/Presidential Palace/Handout via REUTERS

“This parliament, which withstood bombs, has been rendered obsolete and its authority removed,” said Kemal Kilicdaroglu, in a reference to an April referendum that Erdogan narrowly won, giving him sweeping executive powers.

“In the past year, justice has been destroyed. Instead of rapid normalization, a permanent state of emergency has been implemented.”

Kilicdaroglu this month finished a 25-day, 425 km (265 mile) “justice march” from Ankara to Istanbul, to protest the detention of a CHP lawmaker. The march, although largely ignored by the pro-government media, culminated in a massive rally in Istanbul against the crackdown.

The U.S. State Department lauded Turks for defending their democracy, but cautioned about the need to preserve basic freedoms.

“More voices, not fewer, are necessary in challenging times,” it said in a statement.

In Istanbul, hundreds of thousands gathered to listen to Erdogan near the bridge spanning the Bosphorus – the spot where last year civilians confronted the tanks and troops who had halted traffic between the city’s European and Asian sides.

Roads near the bridge – since renamed “July 15 Martyrs’ Bridge” – were so crowded that some people opted to come by ferry. Some in the crowd carried posters of those who died.

Erdogan was also due to speak at parliament in the early hours on Sunday, to observe the precise minute that the putschists bombed the national assembly building.

In the run-up to the anniversary, Turkish media has been saturated by coverage from the coup attempt, with some channels showing almost constant footage of young men and headscarved mothers facing down armed soldiers and tanks.

One man, 20-year-old Ismet Dogan, said he and his friends took to the streets, heeding the call from Erdogan to defy the soldiers. He was shot in both legs, he told broadcaster TRT Haber.

“My friends and I said, ‘We have one nation, if we are to die, let’s do it like men’,” he said. “Everyone who was there with me had come there to die. Nobody was afraid of death.”

Niche bookstores in Malaysia are holding their own, even as COVID-19 hurts businesses
China beefs up laws to handle epidemics, protect whistleblowers
Taiwan’s First Female President Starts Talking Gender Equality
CNA explores Singapore on foot (Day 3): The generosity of strangers and walking with a star
Hand signals only: How Thais are marshalling mass protests