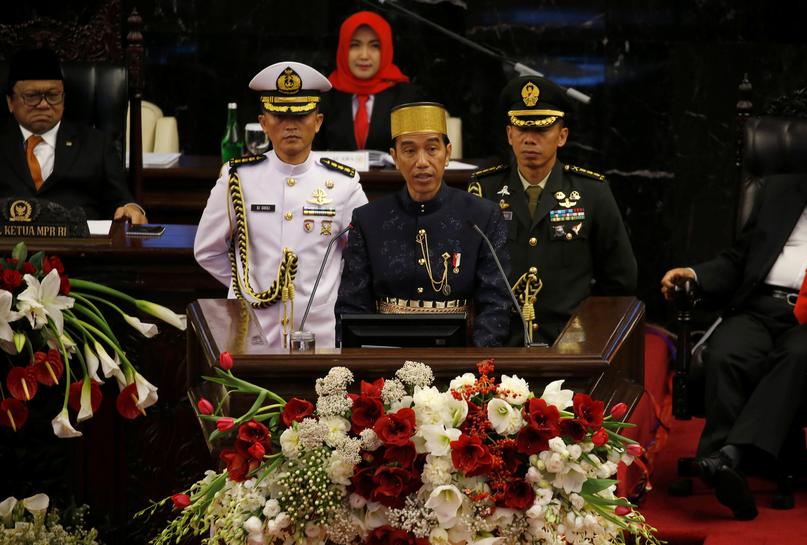 JAKARTA (Reuters) – Indonesia’s president said on Wednesday that the world’s most populous Muslim-majority country needed to pull together to meet the threat of extremism and safeguard a constitution that enshrines religious freedom and diversity.

In an address to parliament ahead of Thursday’s independence day, President Joko Widodo peppered his speech with references to the need to address inequality in Southeast Asia’s biggest economy and tackle the threat of radicalism.

Indonesian police on Tuesday arrested five suspected Islamist militants and seized chemicals near the capital, Jakarta, that they said were being used to make bombs for attacks on the presidential palace at the end of August.

Religious tension in Indonesia has soared since late last year after Islamist-led rallies saw Jakarta’s then governor, a member of a so-called double minority who is ethnic Chinese and Christian, put on trial during city elections over claims he insulted the Koran.

“We want to work together not only in creating an equitable economy, but also in ideological, political, social and cultural development,” said Widodo.

“In the field of ideology, we have to strengthen our national consensus in safeguarding Pancasila, the 1945 Constitution, the unity of the Republic of Indonesia and “Bhinneka Tunggal Ika” (unity in diversity),” he said.

Pancasila is Indonesia’s state ideology, which includes belief in god, the unity of the country, social justice and democracy, and which enshrines religious diversity in an officially secular system.

But there are worries about growing intolerance undermining a tradition of moderate Islam in a country where Muslims form about 85 percent of the population, alongside substantial Buddhist, Christian, Hindu and other minorities.

In April, the then Jakarta governor Basuki Tjahaja Purnama, an ally of Widodo, lost the bitterly fought city election to a Muslim rival and was later jailed for blasphemy, a sentence rights groups and international bodies condemned as unfair and politicized.

“Because the challenges we face now and will face in the future are not easy. We are still confronted with poverty and injustice; we are still facing global economic uncertainty, and we are also facing movements of extremism, radicalism and terrorism,” said Widodo.

The president said the government needed to ensure that all state agencies “gain the highest trust of the people” and noted he had set up a presidential taskforce to oversee the teaching of the state ideology Pancasila, particularly to the young.