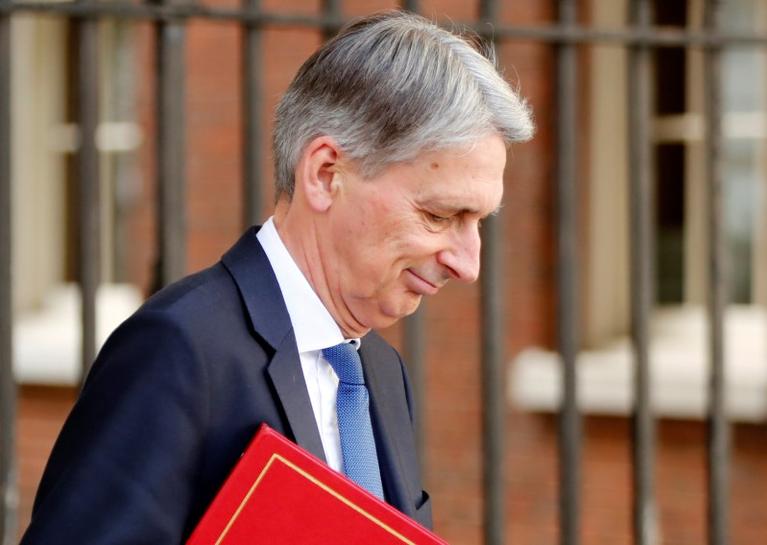 The deficit in June stood at 6.854 billion pounds, up 43 percent compared with the same month last year, the Office for National Statistics said on Friday, citing figures that exclude state-controlled banks.

The shortfall for June was much bigger than a median forecast of 4.8 billion pounds in a Reuters poll of economists.

In the first three months of the financial year, the budget deficit widened by 8.9 percent compared with the same period in 2016 to 22.8 billion pounds, the ONS said.

Hammond has come under pressure from within the ruling Conservative Party as well as from the opposition Labour Party to loosen his grip on public spending, chiefly by relaxing a cap on pay for public workers.

Spending on debt interest jumped an annual 33 percent in June to 4.9 billion pounds, the highest for any month of June since 2011, reflecting a sharp rise in inflation which has pushed up the cost of index-linked bonds for the government.

The deficit was also widened by higher payments to the European Union budget and bigger purchases of goods and services by the government.

Britain has been struggling to fix its public finances since the budget deficit surged to around 10 percent of gross domestic product in 2010 after the global financial crisis.

Since then it has been cut steadily to 2.4 percent of GDP in the 2016/17 financial year which ended in March, its smallest since before the financial crisis.

But the deficit is expected to widen again to 2.9 percent GDP this year when Hammond will have fewer one-off factors to help him than last year.

He is sticking to his plan to balance the budget by the middle of the next decade although he has some room for manoeuvre, allowing him to spend more if needed to support the economy as the country leaves the European Union.

Malaysia to ban all interstate, inter-district movement without police permit for 4 weeks
Minding your PQs: What’s Question Time in Parliament and why should you care?
Group sizes down from 5 to 2, dining-in suspended as Singapore tightens COVID-19 measures
China Tries Online Activists Who Saved Censored Coronavirus Posts on Github
Hong Kong Civil Servants Resign in Record Numbers Amid Crackdown