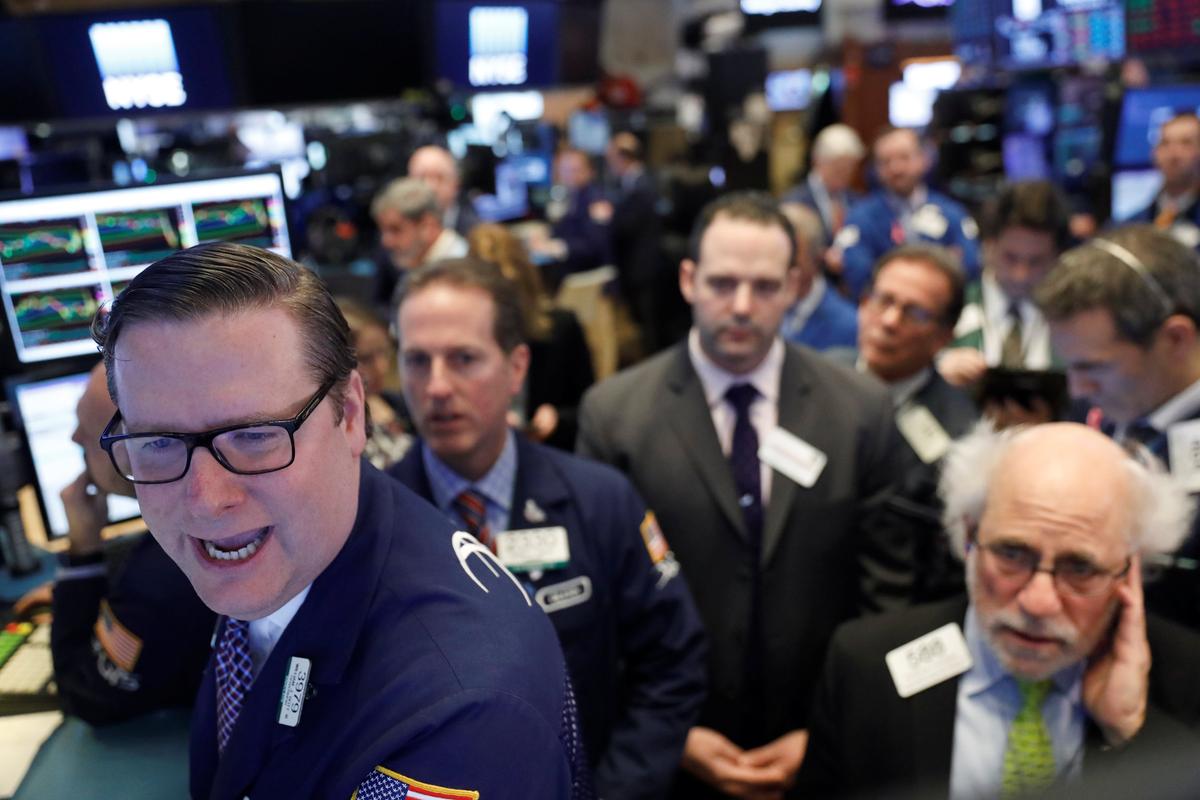 NEW YORK (Reuters) – For nearly nine years, the global hunt for yield sent you to one place: the U.S. stock market.

On Friday, stocks took their biggest pounding since 2016 after the U.S. government’s monthly payrolls report showed the biggest wage gains for workers since 2009. That convinced investors the threat of inflation, long tame since the 2007-2009 recession, is growing larger, sending bond yields soaring.

With central banks having taken extraordinary measures to combat the financial crisis, driving interest rates to record lows and making safe assets like U.S. Treasuries a scarcity, investors of all stripes were forced to turn to equities.

But when what had been a stealth increase in U.S. rates over several months suddenly broke out into the open in the last week, investors were jolted awake to a new reality: Stocks are no longer the only solution for finding yield.

“One of the key mantras of the bull market has been stocks are inexpensive relative to bonds, and bonds are getting cheaper, especially at these highs,” said Michael O‘Rourke, chief market strategist at JonesTrading in Greenwich, Connecticut. “So people are taking profits and they probably should be.”

With the yield on the benchmark 10-year Treasury bond on pace to top 3.5 percent this year for the first time since April of 2011, risk-free bonds are becoming an increasingly attractive place for yield-focused investors.

At the current forward price-earnings ratio of 18.2, according to Thomson Reuters proprietary research, the S&P 500 index’s earnings yield is 5.5 percent, well below the historic norm of around 6.7 percent. With bond yields rising across the spectrum, the 5.5 cents of profit that underpins every $1 in share prices on average begins to look thin by comparison.

“We don’t have a line in the sand but 10-year Treasuries near 3 percent are starting to look a lot more attractive,” said Mike Dowdall, a portfolio manager with BMO Global Asset Management.

That rise in yields prompted a broad sell-off in stocks on Friday, as investors reacted to data from the U.S. Labor Department showing wages last month recorded their largest annual gain in more than 8-1/2 years.

Equities continued a five-day downward trend, with the S&P 500 sliding more than 2 percent for its largest one-day decline since September 2016. The Dow Jones Industrial Average lost more than 2.5 percent.

Meanwhile, a sell-off in bonds that has gathered pace this year intensified, with yields on 10-year Treasuries hitting a four-year peak.

That dynamic is putting pressure on areas of the market that had served as bond proxies. As a result, fund managers are rediscovering the risk of rising rates, selling out of assets ranging from high-yield “junk” bonds to utility stocks and pushing the broad S&P 500 lower.

Warning signs for equities have been long discussed, as the market hit almost daily fresh highs. On Friday, Merrill Lynch’s bull-bear indicator, which has accurately predicted 11 out of 11 U.S. stock market corrections since 2002, hit a “sell” signal.

The rise in bond yields is “certainly beginning to concern the markets,” said Nicholas Colas, co-founder at DataTrek Research in New York. “Rates have risen fairly quickly this year and the speed of the advance is worrying.”

The yield on the 10-year Treasury has risen to 2.46 percent from 2.84 percent at the start of the year, the swiftest rise since November 2016.

Earlier this week, the Federal Reserve left rates unchanged but said it anticipated inflation likely would rise in 2018, bolstering expectations borrowing costs will continue to climb. The Fed currently projects three rate hikes for this year.

Stocks have so far proven largely immune to rising rates, with the S&P 500 jumping nearly 20 percent in 2017. Stocks have not fallen by 10 percent or more since the start of 2016, leaving recent declines as buying opportunities.

A stock market correction could pose a political problem for President Donald Trump and his fellow Republicans ahead of congressional elections later this year. Trump has trumpeted the sharp gains in U.S. equities since he took office as proof that his economic policies were working.

There already are signs investors are moving into actively managed stock funds in order to sidestep the impact of rising rates. U.S.-based active stock mutual funds, which lost $7.2 billion in outflows as investors moved toward “passive” stock exchange traded funds (ETFs), attracted $2.4 billion in new assets during the week that ended Wednesday, according to data from Lipper.

At the same time, the lowest end of the credit spectrum has been facing cash withdrawals as rising rates increase the cost of refinancing debt. In the week ended Wednesday, U.S.-based high-yield “junk” bond funds posted outflows of $1.8 billion, their third consecutive week of cash withdrawals, according to Lipper. The four-week moving average for the sector is negative $825 million, the largest such figure since early December.

Consumer discretionary stocks, which tend to outperform during periods of inflation due to rising wages, are up 8 percent over the same time.

Fund managers say that they expect that other growth-oriented sectors such as technology and financials will continue to outperform, thanks in part to a pickup in inflation and the Republican-led tax overhaul that slashed corporate rates.

Overall, 78.1 percent of companies in the S&P 500 have reported fourth-quarter earnings above analyst expectations, compared with an average of 72 percent over the last year, according to Thomson Reuters data.

“You’re getting a pickup in economic growth and in wages, so that makes the growth sectors still the place to be,” said Margaret Patel, a senior portfolio manager at Wells Fargo Funds who runs a portfolio of both equities and fixed income. “Even Treasury yields of 3 percent have never been an impediment to the stock market doing better.”