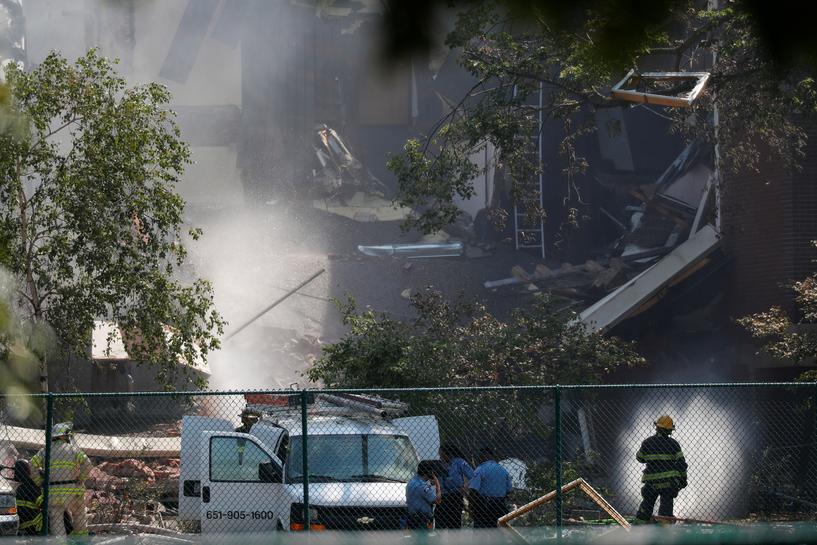 (Reuters) – Federal and state authorities on Thursday investigated the cause of a gas explosion that ripped through a Christian private school in Minneapolis, killing two people and injured nine.

School receptionist Ruth Berg and staff member John Carlson were killed in the explosion that tore through the Upper School of the Minnehaha Academy at about 10 a.m. local time on Wednesday, the school said.

“Please keep John’s family, Ruth’s family, those who were injured, and our school community, in your prayers,” the school said on Facebook.

The school called Carlson, who graduated from the school in 1953, its “biggest cheerleader.” Carlson, 82, was a custodian and Berg, a 47-year-old receptionist, was engaged to be married, the Minneapolis Star-Tribune newspaper reported.

Local officials said it appeared that a ruptured gas line may have led to the explosion, caused by contractors working at the school, local media reported.

The academy said there had been a gas leak and explosion at its school.

The state fire marshal and local fire officials were combing through the rubble on Thursday to determine the exact cause of the explosion.

Damage to the building is seen as emergency personnel work the scene of school building collapse at Minnehaha Academy in Minneapolis, Minnesota, U.S., August 2, 2017.Adam Bettcher

“The investigators will continue their work and hopefully they will have some answers … in the coming days,” Minneapolis Fire Chief John Fruetel said at a news conference on Wednesday.

The federal Bureau of Alcohol, Tobacco, Firearms and Explosives had agents on the scene, the agency said on Twitter.

According to its website, Minnehaha Academy was founded in 1913 and teaches more than 800 students from pre-kindergarten through 12th grade on two campuses.

School was not in session due to summer break.

“It would have been dramatically worse … we were pretty lucky in that sense,” Fruetel said.

Of the nine people injured, one was in critical condition and two were listed as satisfactory at Hennepin County Medical Center. Another six were released, the hospital said on Twitter on Thursday.

Hundreds of people crowded into the campus chapel for a prayer service at the academy’s lower and middle campus on Wednesday night.

“We’re going to get through it,” said Minnehaha Academy President Donna Harris, who was injured in the explosion. “We trust God. He is going to do phenomenal work.”

Reporting by Brendan O’Brien in Milwaukee; Editing by Jeffrey Benkoe